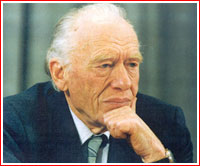 Gleb Evgeniyevich Lozino-Lozinskiy ' onMouseout='HidePop("81214")' href="/topics/Kiev">Kiev
Kiev
Kiev or Kyiv is the capital and the largest city of Ukraine, located in the north central part of the country on the Dnieper River. The population as of the 2001 census was 2,611,300. However, higher numbers have been cited in the press....
, Russian Empire
Russian Empire
The Russian Empire was a state that existed from 1721 until the Russian Revolution of 1917. It was the successor to the Tsardom of Russia and the predecessor of the Soviet Union...
(now Ukraine
Ukraine
Ukraine is a country in Eastern Europe. It has an area of 603,628 km², making it the second largest contiguous country on the European continent, after Russia...
), December 25, 1909 – November 28, 2001) was a Russian and Ukrainian engineer, General Director and General Designer of the JSC NPO Molniya
NPO Molniya
NPO Molniya is a Russian scientific and production enterprise, founded on February 26, 1976 prior to and for the creation of Shuttle Buran. At present, NPO Molniya carrying works on the reusable launch systems.- External links :*...
, lead developer of the Russian Spiral
Mikoyan-Gurevich MiG-105
The Mikoyan-Gurevich MiG-105 was a manned test vehicle to explore low-speed handling and landing.It was a visible result of a Soviet project to create an orbital spaceplane...
and Shuttle Buran
Shuttle Buran
The Buran spacecraft , GRAU index 11F35 K1 was a Russian orbital vehicle analogous in function and design to the US Space Shuttle and developed by Chief Designer Gleb Lozino-Lozinskiy of Energia rocket corporation...
programme, Doctor of Science
Doctor of Science
Doctor of Science , usually abbreviated Sc.D., D.Sc., S.D. or Dr.Sc., is an academic research degree awarded in a number of countries throughout the world. In some countries Doctor of Science is the name used for the standard doctorate in the sciences, elsewhere the Sc.D...
, Hero of Socialist Labour, laureate of Lenin Prize (1962) and State Prizes (1950, 1952).

Born in Kiev, the family moved to Kremenchuk
Kremenchuk
Kremenchuk is an important industrial city in the Poltava Oblast of central Ukraine. Serving as the administrative center of the Kremenchutskyi Raion , the city itself is also designated as a separate raion within the oblast, and is located on the banks of Dnieper River.-History:Kremenchuk was...
where Hlib received his early education in and graduated from Kremenchuk technical highschool as a plumber. He later enroled in 1926 and graduated from the Kharkiv Mechanical and Machine-building Institute in 1930 as an engineer specializing in steam turbines. Initially he work at a power station but in 1932 transferred to work in the aviation industry where he was involved in the development of jet turbines in Ukraine.

In 1939 he moved to Leningrad and in 1941 return to Ukraine to work in Kyiv. During the war he was evacuated to Kuybishev and in 1942 settled in Moscow where he joined a design bureau led by Artem Mikoyan, the developer of the Soviet fighter jets known around the world as MIG
Mig
-Industry:*MiG, now Mikoyan, a Russian aircraft corporation, formerly the Mikoyan-Gurevich Design Bureau*Metal inert gas welding or MIG welding, a type of welding using an electric arc and a shielding gas-Business and finance:...
s. Lozinskiy led the work on the first Soviet jet engine with an adjustable nozzle and was responsible for the production of several generations of MIG fighter jets.

In 1965, Lozino-Lozinskiy led a top-secret project named Spiral
Spiral
In mathematics, a spiral is a curve which emanates from a central point, getting progressively farther away as it revolves around the point.-Spiral or helix:...
which was an early Soviet attempt to develop a small manned space plane similar to the American X-15 project. It was planned to be launched on the back of a hypersonic aircraft, itself capable of reaching Mach 6. After separation from the carrier aircraft, the Spiral would have been boosted into orbit by a detachable rocket stage.

Although several prototypes of the Spiral space plane were built and tested in atmospheric flights, the program was terminated.

In 1976, Lozino-Lozinskiy was put in charge of NPO Molniya, a newly created design centre on the outskirts of Moscow. The organization had the unprecedented task of developing a 100-ton reusable orbiter with capabilities similar to or exceeding those of the US Space Shuttle. Unlike the US Shuttle, the Soviet winged orbiter would ride into orbit on a super-heavy booster developed separately at NPO Energia. Known as Buran
Buran
Buran may refer to:* Buran , a Soviet space shuttle** Buran program, which developed the spacecraft* Buran eavesdropping device, invented by Léon Theremin, used by soviet intelligence* Buran cruise missile, a Soviet cruise missile...
, the Soviet shuttle made a single unmanned orbital flight and completed the world’s first automated landing in 1988. With the collapse of the Soviet Union in 1991, the Buran program was cancelled due to lack of funds.

Lozino-Lozinskiy led NPO Molniya in the search for the development of lightweight airplanes, aimed at reducing the cost of launching commercial payloads into space.

A small reusable space plane, developed under Lozino-Lozinskiy’s leadership during the 1990s, was designed for launch on top of the giant Antonov-225/Mriya aircraft. Known as MAKS, or Multi-purpose Reusable Aerospace System.