A shock absorber is a mechanical device designed to smooth out or damp
Damping
In physics, damping is any effect that tends to reduce the amplitude of oscillations in an oscillatory system, particularly the harmonic oscillator.In mechanics, friction is one such damping effect...
shock
Shock (mechanics)
A mechanical or physical shock is a sudden acceleration or deceleration caused, for example, by impact, drop, kick, earthquake, or explosion. Shock is a transient physical excitation....
impulse, and dissipate kinetic energy
Kinetic energy
The kinetic energy of an object is the energy which it possesses due to its motion.It is defined as the work needed to accelerate a body of a given mass from rest to its stated velocity. Having gained this energy during its acceleration, the body maintains this kinetic energy unless its speed changes...
. It is a type of dashpot
Dashpot
A dashpot is a mechanical device, a damper which resists motion via viscous friction. The resulting force is proportional to the velocity, but acts in the opposite direction, slowing the motion and absorbing energy. It is commonly used in conjunction with a spring...
.

The shock absorber's function is to absorb or dissipate energy. One design consideration, when designing or choosing a shock absorber, is where that energy will go. In most dashpots, energy is converted to heat inside the viscous fluid. In hydraulic cylinder
Hydraulic cylinder
A Hydraulic cylinder is a mechanical actuator that is used to give a unidirectional force through a unidirectional stroke. It has many applications, notably in engineering vehicles.- Operation :...
s, the hydraulic fluid
Fluid
In physics, a fluid is a substance that continually deforms under an applied shear stress. Fluids are a subset of the phases of matter and include liquids, gases, plasmas and, to some extent, plastic solids....
heats up, while in air cylinders, the hot air is usually exhausted to the atmosphere. In other types of dashpots, such as electromagnetic
Electromagnetism
Electromagnetism is one of the four fundamental interactions in nature. The other three are the strong interaction, the weak interaction and gravitation...
types, the dissipated energy can be stored and used later. In general terms, shock absorbers help cushion vehicles on uneven roads.

Shock absorbers are an important part of automobile
Automobile
An automobile, autocar, motor car or car is a wheeled motor vehicle used for transporting passengers, which also carries its own engine or motor...
and motorcycle
Motorcycle
A motorcycle is a single-track, two-wheeled motor vehicle. Motorcycles vary considerably depending on the task for which they are designed, such as long distance travel, navigating congested urban traffic, cruising, sport and racing, or off-road conditions.Motorcycles are one of the most...
suspension
Suspension (vehicle)
Suspension is the term given to the system of springs, shock absorbers and linkages that connects a vehicle to its wheels. Suspension systems serve a dual purpose — contributing to the car's roadholding/handling and braking for good active safety and driving pleasure, and keeping vehicle occupants...
s, aircraft
Aircraft
An aircraft is a vehicle that is able to fly by gaining support from the air, or, in general, the atmosphere of a planet. An aircraft counters the force of gravity by using either static lift or by using the dynamic lift of an airfoil, or in a few cases the downward thrust from jet engines.Although...
landing gear
Landing Gear
Landing Gear is Devin the Dude's fifth studio album. It was released on October 7, 2008. It was his first studio album since signing with the label Razor & Tie. It features a high-profile guest appearance from Snoop Dogg. As of October 30, 2008, the album has sold 18,906 copies.-Track...
, and the supports for many industrial machine
Machine
A machine manages power to accomplish a task, examples include, a mechanical system, a computing system, an electronic system, and a molecular machine. In common usage, the meaning is that of a device having parts that perform or assist in performing any type of work...
s. Large shock absorbers have also been used in structural engineering
Structural engineering
Structural engineering is a field of engineering dealing with the analysis and design of structures that support or resist loads. Structural engineering is usually considered a specialty within civil engineering, but it can also be studied in its own right....
to reduce the susceptibility of structures to earthquake
Earthquake
An earthquake is the result of a sudden release of energy in the Earth's crust that creates seismic waves. The seismicity, seismism or seismic activity of an area refers to the frequency, type and size of earthquakes experienced over a period of time...
damage and resonance
Resonance
In physics, resonance is the tendency of a system to oscillate at a greater amplitude at some frequencies than at others. These are known as the system's resonant frequencies...
. A transverse mounted shock absorber, called a yaw damper
Yaw damper (railroad)
A yaw damper is a transverse mounted shock absorber used to prevent railcars and locomotives from swaying excessively from side to side. Yaw dampers prevent locomotives and passenger railcars from striking station platforms as they roll past them and reduce the gap that must be left between the...
, helps keep railcar
Railcar
A railcar, in British English and Australian English, is a self-propelled railway vehicle designed to transport passengers. The term "railcar" is usually used in reference to a train consisting of a single coach , with a driver's cab at one or both ends. Some railways, e.g., the Great Western...
s from swaying excessively from side to side and are important in passenger railroads, commuter rail and rapid transit
Rapid transit
A rapid transit, underground, subway, elevated railway, metro or metropolitan railway system is an electric passenger railway in an urban area with a high capacity and frequency, and grade separation from other traffic. Rapid transit systems are typically located either in underground tunnels or on...
systems because they prevent railcars from damaging station platforms. The success of passive damping technologies in suppressing vibration is demonstrated by its market size—around US $4.5 billion. 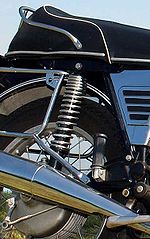 In a vehicle, shock absorbers reduce the effect of traveling over rough ground, leading to improved ride quality
Ride quality
Ride quality refers to the degree of protection offered vehicle occupants from uneven elements in the road surface, or the terrain if driving off-road. A car with very good ride quality is also a comfortable car to ride in. Cars which disturb vehicle occupants with major or minor road...
and increase in comfort. While shock absorbers serve the purpose of limiting excessive suspension movement, their intended sole purpose is to dampen spring oscillations. Shock absorbers use valving of oil and gasses to absorb excess energy from the springs. Spring rates are chosen by the manufacturer based on the weight of the vehicle, loaded and unloaded. Some people use shocks to modify spring rates but this is not the correct use. Along with hysteresis
Hysteresis
Hysteresis is the dependence of a system not just on its current environment but also on its past. This dependence arises because the system can be in more than one internal state. To predict its future evolution, either its internal state or its history must be known. If a given input alternately...
in the tire itself, they dampen the energy stored in the motion of the unsprung weight
Unsprung weight
In a ground vehicle with a suspension, the unsprung weight is the mass of the suspension, wheels or tracks , and other components directly connected to them, rather than supported by the suspension...
up and down. Effective wheel bounce damping may require tuning shocks to an optimal resistance.

Spring
Spring (device)
A spring is an elastic object used to store mechanical energy. Springs are usually made out of spring steel. Small springs can be wound from pre-hardened stock, while larger ones are made from annealed steel and hardened after fabrication...
-based shock absorbers commonly use coil spring
Coil spring
A Coil spring, also known as a helical spring, is a mechanical device, which is typically used to store energy and subsequently release it, to absorb shock, or to maintain a force between contacting surfaces...
s or leaf spring
Leaf spring
Originally called laminated or carriage spring, a leaf spring is a simple form of spring, commonly used for the suspension in wheeled vehicles...
s, though torsion bars are used in torsional
Torsion (mechanics)
In solid mechanics, torsion is the twisting of an object due to an applied torque. In sections perpendicular to the torque axis, the resultant shear stress in this section is perpendicular to the radius....
shocks as well. Ideal springs alone, however, are not shock absorbers, as springs only store and do not dissipate or absorb energy. Vehicles typically employ both hydraulic shock absorbers and springs or torsion bars. In this combination, "shock absorber" refers specifically to the hydraulic piston that absorbs and dissipates vibration.

Applied to a structure such as a building
Building
In architecture, construction, engineering, real estate development and technology the word building may refer to one of the following:...
or bridge
Bridge
A bridge is a structure built to span physical obstacles such as a body of water, valley, or road, for the purpose of providing passage over the obstacle...
it may be part of a seismic retrofit
Seismic retrofit
Seismic retrofitting is the modification of existing structures to make them more resistant to seismic activity, ground motion, or soil failure due to earthquakes. With better understanding of seismic demand on structures and with our recent experiences with large earthquakes near urban centers,...
or as part of new, earthquake resistant construction
Earthquake engineering
Earthquake engineering is the scientific field concerned with protecting society, the natural and the man-made environment from earthquakes by limiting the seismic risk to socio-economically acceptable levels...
. In this application it allows yet restrains motion and absorbs resonant energy
Resonance
In physics, resonance is the tendency of a system to oscillate at a greater amplitude at some frequencies than at others. These are known as the system's resonant frequencies...
, which can cause excessive motion and eventual structural failure
Structural failure
Structural failure refers to loss of the load-carrying capacity of a component or member within a structure or of the structure itself. Structural failure is initiated when the material is stressed to its strength limit, thus causing fracture or excessive deformations...
.

It may eventually be possible to generate useful energy from the displacement of the fluid in a shock absorber.

There are several commonly-used approaches to shock absorption: