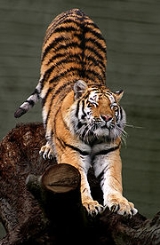 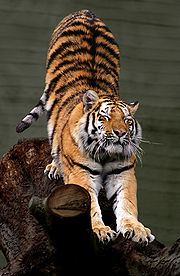 Stretching is a form of physical exercise
Physical exercise
Physical exercise is any bodily activity that enhances or maintains physical fitness and overall health and wellness. It is performed for various reasons including strengthening muscles and the cardiovascular system, honing athletic skills, weight loss or maintenance, as well as for the purpose of...
in which a specific skeletal muscle
Skeletal muscle
Skeletal muscle is a form of striated muscle tissue existing under control of the somatic nervous system- i.e. it is voluntarily controlled. It is one of three major muscle types, the others being cardiac and smooth muscle...
(or muscle group) is deliberately elongated, often by abduction
Abduction (kinesiology)
Abduction, in functional anatomy, is a movement which draws a limb away from the median plane of the body. It is thus opposed to adduction.-Upper limb:* of arm at shoulder ** Supraspinatus** Deltoid* of hand at wrist...
from the torso, in order to improve the muscle's felt elasticity
Elasticity (physics)
In physics, elasticity is the physical property of a material that returns to its original shape after the stress that made it deform or distort is removed. The relative amount of deformation is called the strain....
and reaffirm comfortable muscle tone
Muscle tone
In physiology, medicine, and anatomy, muscle tone is the continuous and passive partial contraction of the muscles, or the muscle’s resistance to passive stretch during resting state. It helps maintain posture, and it declines during REM sleep.-Purpose:Unconscious nerve impulses maintain the...
. The result is a feeling of increased muscle control, flexibility and range of motion. Stretching is also used therapeutically
Physical therapy
Physical therapy , often abbreviated PT, is a health care profession. Physical therapy is concerned with identifying and maximizing quality of life and movement potential within the spheres of promotion, prevention, diagnosis, treatment/intervention,and rehabilitation...
to alleviate cramps.

In its most basic form, stretching is a natural and instinctive activity; it is performed by human
Human
Humans are the only living species in the Homo genus...
s and many animal
Animal
Animals are a major group of multicellular, eukaryotic organisms of the kingdom Animalia or Metazoa. Their body plan eventually becomes fixed as they develop, although some undergo a process of metamorphosis later on in their life. Most animals are motile, meaning they can move spontaneously and...
s. It can be accompanied by yawn
Yawn
A yawn is a reflex of simultaneous inhalation of air and stretching of the eardrums, followed by exhalation of breath. Pandiculation is the act of yawning and stretching simultaneously....
ing. Stretching often occurs instinctively after waking from sleep, after long periods of inactivity, or after exiting confined spaces and areas.

Increasing flexibility through stretching is one of the basic tenets of physical fitness. It is common for athletes to stretch before and after exercise in order to reduce injury and increase performance. Yoga
Yoga
Yoga is a physical, mental, and spiritual discipline, originating in ancient India. The goal of yoga, or of the person practicing yoga, is the attainment of a state of perfect spiritual insight and tranquility while meditating on Supersoul...
involves the stretching of major muscle groups, some of which require a high level of flexibility to perform, for example the lotus position
Lotus position
The Lotus Position is a cross-legged sitting posture originating in meditative practices of ancient India, in which the feet are placed on the opposing thighs. It is an established posture, commonly used for meditation, in the Hindu Yoga and Buddhist contemplative traditions...
. Stretching can strengthen muscles, and in turn strong muscles are important to stretching safely and effectively.

Stretching can be dangerous when performed incorrectly. There are many techniques for stretching in general, but depending on which muscle group is being stretched, some techniques may be ineffective or detrimental, even to the point of causing permanent damage to the tendons, ligaments and muscle
Muscle
Muscle is a contractile tissue of animals and is derived from the mesodermal layer of embryonic germ cells. Muscle cells contain contractile filaments that move past each other and change the size of the cell. They are classified as skeletal, cardiac, or smooth muscles. Their function is to...
fiber. The physiological nature of stretching and theories about the effect of various techniques are therefore subject to heavy inquiry.

Studies have shed light on a large protein
Protein
Proteins are biochemical compounds consisting of one or more polypeptides typically folded into a globular or fibrous form, facilitating a biological function. A polypeptide is a single linear polymer chain of amino acids bonded together by peptide bonds between the carboxyl and amino groups of...
within skeletal muscles named titin
Titin
Titin , also known as connectin, is a protein that in humans is encoded by the TTN gene. Titin is a giant protein that functions as a molecular spring which is responsible for the passive elasticity of muscle. It is composed of 244 individually folded protein domains connected by unstructured...
. A study performed by Magid and Law demonstrated that the origin of passive muscle tension (which occurs during stretching) is actually within the myofibrils, not extracellularly as had previously been supposed.
Due to neurological safeguards against injury, it is normally impossible for adults to stretch most muscle groups to their fullest length without training due to the activation of muscle antagonists as the muscle reaches its normal range of motion. 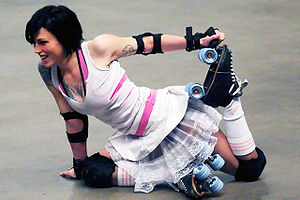 One review suggests that there are many beneficial stretches that can improve range of motion
Range of motion
Range of motion , is the distance that a movable object may normally travel while properly attached to another object. It is also called range of travel, particularly when talking about mechanical devices and in mechanical engineering fields...
(ROM) in athletes, especially runners
Running
Running is a means of terrestrial locomotion allowing humans and other animals to move rapidly on foot. It is simply defined in athletics terms as a gait in which at regular points during the running cycle both feet are off the ground...
. Another study found that classic "static stretching" did not prevent injuries for runners.

Also, certain stretching techniques and protocols prevent injuries when performed (within 15 minutes) prior to exercise.

It has also been suggested that proprioceptive neuromuscular facilitation
PNF stretching
PNF stretching, or proprioceptive neuromuscular facilitation stretching, is an occupational therapy and physical therapy procedure designed in the 1940s and 1950s to rehabilitate patients with paralysis. It is often a combination of passive stretching and isometrics contractions. In the 1980s,...
(PNF) stretching yields the greatest change in range of motion, especially short-term benefits. Reasoning behind the biomechanical benefit of PNF stretching points to muscular reflex relaxation found in the musculotendinous unit being stretched. Others suggest that PNF benefits are due to influence on the joint where the stretch is felt. 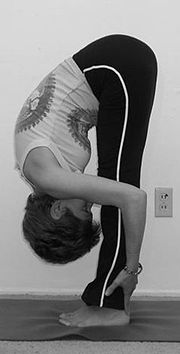 Stretching may also cause ischemia
Ischemia
In medicine, ischemia is a restriction in blood supply, generally due to factors in the blood vessels, with resultant damage or dysfunction of tissue. It may also be spelled ischaemia or ischæmia...
in muscles, which reduces oxygen levels and the ability to remove metabolic waste. Higher levels of metabolic waste create a catalyst that contracts muscles. This may cause muscle injury in individual performance. Other theories included claim active static stretching increases inflow of Ca2+ from extra cellular spaces into the muscles being stretched. The increase of Ca2+ reduced the muscle twitch tension by up to sixty percent. Reasoning behind this claim is that increased levels of Ca2+ in resting muscles predisposes individuals to fatigue quicker than individuals who did not stretch.

Some people are more flexible than others as defined by individual body flexibility score; this includes sex differences where females are generally more flexible than males. Stretching may not increase range of motion, but rather increase individual stretch tolerance, becoming detrimental to athletic performance. Among the factors these studies measure are capsular mobility, FlexiScore and joint-muscle compliance.

Results of research by Witrouw et al. found that: each of which has a different consideration based on individual activity:

The reason behind conflicting data is claimed to be due to the different levels of observed sports activity.