Most commonly brakes use friction
Friction
Friction is the force resisting the relative motion of solid surfaces, fluid layers, and/or material elements sliding against each other. There are several types of friction:...
to convert kinetic energy
Kinetic energy
The kinetic energy of an object is the energy which it possesses due to its motion.It is defined as the work needed to accelerate a body of a given mass from rest to its stated velocity. Having gained this energy during its acceleration, the body maintains this kinetic energy unless its speed changes...
into heat
Heat
In physics and thermodynamics, heat is energy transferred from one body, region, or thermodynamic system to another due to thermal contact or thermal radiation when the systems are at different temperatures. It is often described as one of the fundamental processes of energy transfer between...
, though other methods of energy conversion may be employed. For example regenerative braking converts much of the energy to electrical energy, which may be stored for later use.

Hello, I just want to know what is "sprocket brake system" ?

how the brake is applied? what axis need to brake?
More 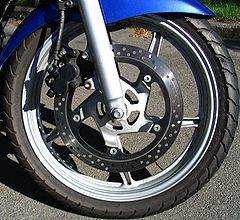 ), an object traveling at 10 meters per second has 100 times as much energy as one traveling at 1 meter per second, and consequently the theoretical braking distance
Braking distance
Braking distance refers to the distance a vehicle will travel from the point where its brakes are fully applied to when it comes to a complete stop...
, when braking at the traction limit, is 100 times as long. In practice, fast vehicles usually have significant air drag, and energy lost to air drag rises quickly with speed.

Almost all wheel
Wheel
A wheel is a device that allows heavy objects to be moved easily through rotating on an axle through its center, facilitating movement or transportation while supporting a load, or performing labor in machines. Common examples found in transport applications. A wheel, together with an axle,...
ed vehicle
Vehicle
A vehicle is a device that is designed or used to transport people or cargo. Most often vehicles are manufactured, such as bicycles, cars, motorcycles, trains, ships, boats, and aircraft....
s have a brake of some sort. Even baggage cart
Baggage cart
Baggage carts, luggage carts or trolleys are small vehicles pushed by travelers to carry individual luggage, mostly suitcases. There are two major sizes: One for big luggage and one for small luggage...
s and shopping cart
Shopping cart
A shopping cart is a cart supplied by a shop, especially supermarkets, for use by customers inside the shop for transport of merchandise to the check-out counter during shopping...
s may have them for use on a moving ramp. Most fixed-wing aircraft
Fixed-wing aircraft
A fixed-wing aircraft is an aircraft capable of flight using wings that generate lift due to the vehicle's forward airspeed. Fixed-wing aircraft are distinct from rotary-wing aircraft in which wings rotate about a fixed mast and ornithopters in which lift is generated by flapping wings.A powered...
are fitted with wheel brakes on the undercarriage
Undercarriage
The undercarriage or landing gear in aviation, is the structure that supports an aircraft on the ground and allows it to taxi, takeoff and land...
. Some aircraft also feature air brakes
Air brake (aircraft)
In aeronautics, air brakes or speedbrakes are a type of flight control surface used on an aircraft to increase drag or increase the angle of approach during landing....
designed to reduce their speed in flight. Notable examples include glider
Glider aircraft
Glider aircraft are heavier-than-air craft that are supported in flight by the dynamic reaction of the air against their lifting surfaces, and whose free flight does not depend on an engine. Mostly these types of aircraft are intended for routine operation without engines, though engine failure can...
s and some World War II
World War II
World War II, or the Second World War , was a global conflict lasting from 1939 to 1945, involving most of the world's nations—including all of the great powers—eventually forming two opposing military alliances: the Allies and the Axis...
-era aircraft, primarily some fighter aircraft
Fighter aircraft
A fighter aircraft is a military aircraft designed primarily for air-to-air combat with other aircraft, as opposed to a bomber, which is designed primarily to attack ground targets...
and many dive bombers of the era. These allow the aircraft to maintain a safe speed in a steep descent. The Saab B 17
Saab 17
-References:* Jane, Fred T. “The Saab-17.” Jane’s Fighting Aircraft of World War II. London: Studio, 1946. ISBN 1-85170-493-0....
dive bomber
Dive bomber
A dive bomber is a bomber aircraft that dives directly at its targets in order to provide greater accuracy for the bomb it drops. Diving towards the target reduces the distance the bomb has to fall, which is the primary factor in determining the accuracy of the drop...
used the deployed undercarriage as an air brake.

Friction brakes on automobile
Automobile
An automobile, autocar, motor car or car is a wheeled motor vehicle used for transporting passengers, which also carries its own engine or motor...
s store braking heat in the drum brake
Drum brake
A drum brake is a brake in which the friction is caused by a set of shoes or pads that press against a rotating drum-shaped part called a brake drum....
or disc brake
Disc brake
The disc brake or disk brake is a device for slowing or stopping the rotation of a wheel while it is in motion.A brake disc is usually made of cast iron, but may in some cases be made of composites such as reinforced carbon–carbon or ceramic matrix composites. This is connected to the wheel and/or...
while braking then conduct it to the air gradually. When traveling downhill some vehicles can use their engines to brake
Engine braking
Engine braking is where the retarding forces within an engine are used to slow a vehicle down, as opposed to using an external braking mechanism, for example friction brakes or magnetic brakes....
.

When the brake pedal
Automobile pedal
An automobile may have two to four foot pedals. The arrangement is the same for both right- and left-hand traffic. From left to right:* normally operated by the left foot:**clutch pedal, not in the case of automatic transmission...
of a modern vehicle with hydraulic brake
Hydraulic brake
The hydraulic brake is an arrangement of braking mechanism which uses brake fluid, typically containing ethylene glycol, to transfer pressure from the controlling unit, which is usually near the operator of the vehicle, to the actual brake mechanism, which is usually at or near the wheel of the...
s is pushed, ultimately a piston
Piston
A piston is a component of reciprocating engines, reciprocating pumps, gas compressors and pneumatic cylinders, among other similar mechanisms. It is the moving component that is contained by a cylinder and is made gas-tight by piston rings. In an engine, its purpose is to transfer force from...
pushes the brake pad against the brake disc
Disc brake
The disc brake or disk brake is a device for slowing or stopping the rotation of a wheel while it is in motion.A brake disc is usually made of cast iron, but may in some cases be made of composites such as reinforced carbon–carbon or ceramic matrix composites. This is connected to the wheel and/or...
which slows the wheel down. On the brake drum it is similar as the cylinder pushes the brake shoe
Brake shoe
A brake shoe is the part of a braking system which carries the brake lining in the drum brakes used on automobiles, or the brake block in train brakes and bicycle brakes.-Automobile drum brake:...
s against the drum which also slows the wheel down.

Brakes may be broadly described as using friction, pumping, or electromagnetics. One brake may use several principles: for example, a pump may pass fluid through an orifice to create friction:

Brakes are often described according to several characteristics including:

Most modern vehicles use a vacuum assisted brake
Vacuum servo
A vacuum servo is a component used on motor vehicles in their braking system, to provide assistance to the driver by decreasing the braking effort. In the USA it is commonly called a brake booster.-Background:...
system that greatly increases the force applied to the vehicle's brakes by its operator. This additional force is supplied by the manifold vacuum
Manifold vacuum
Manifold vacuum, or engine vacuum in an internal combustion engine is the difference in air pressure between the engine's intake manifold and Earth's atmosphere....
generated by the running engine. This force is greatly reduced when the engine is running at full throttle, as the available vacuum is diminished. However, brakes are rarely applied at full throttle; the driver takes the right foot off the gas pedal and moves it to the brake pedal - unless left-foot braking
Left-foot braking
Left-foot braking is the technique of using the left foot to operate the brake pedal in an automobile, leaving the right foot dedicated to the throttle pedal...
is used.

Because of low vacuum at high RPM, reports of unintended acceleration
Sudden unintended acceleration
Sudden Unintended Acceleration is the unintended, unexpected, uncontrolled acceleration of a vehicle from a stationary position, low initial speed or at cruising speed, often accompanied by an apparent loss of braking effectiveness...
are often accompanied by complaints of failed or weakened brakes, as the high-revving engine is unable to provide enough vacuum to power the brake booster. This problem is exacerbated in vehicles equipped with automatic transmissions as the vehicle will automatically downshift upon application of the brakes, thereby further elevating engine RPM and reducing available braking power while increasing the engine's effective torque.

For road vehicles, the noise produced varies significantly with tire
Tire
A tire or tyre is a ring-shaped covering that fits around a wheel rim to protect it and enable better vehicle performance by providing a flexible cushion that absorbs shock while keeping the wheel in close contact with the ground...
construction, road surface, and the magnitude of the deceleration. Noise can be caused by different things. These are signs that there may be issues with brakes wearing out over time.

A significant amount of energy is always lost while braking, even with regenerative braking which is not perfectly efficient
Energy conversion efficiency
Energy conversion efficiency is the ratio between the useful output of an energy conversion machine and the input, in energy terms. The useful output may be electric power, mechanical work, or heat.-Overview:...
. Therefore a good metric of efficient energy use
Efficient energy use
Efficient energy use, sometimes simply called energy efficiency, is the goal of efforts to reduce the amount of energy required to provide products and services. For example, insulating a home allows a building to use less heating and cooling energy to achieve and maintain a comfortable temperature...
while driving is to note how much one is braking. If the majority of deceleration is from unavoidable friction instead of braking, one is squeezing out most of the service from the vehicle. Minimizing brake use is one of the fuel economy-maximizing behaviors
Fuel economy-maximizing behaviors
Fuel economy-maximizing behaviors describe techniques that drivers can use to optimize their automobile fuel economy. The energy in fuel consumed in driving is lost in many ways, including engine inefficiency, aerodynamic drag, rolling friction, and kinetic energy lost to braking...
.

While energy is always lost during a brake event, a secondary factor that influences efficiency is "off-brake drag", or drag that occurs when the brake is not intentionally actuated. After a braking event, hydraulic pressure drops in the system , allowing the brake caliper pistons to retract. However, this retraction must accommodate all compliance in the system (under pressure) as well as thermal distortion of components like the brake disc or the brake system will drag until the contact with the disc, for example, knocks the pads and pistons back from the rubbing surface. During this time, there can be significant brake drag. This brake drag can lead to significant parasitic power loss, thus impact fuel economy and vehicle performance.