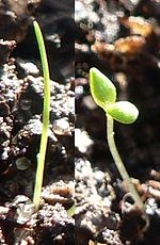 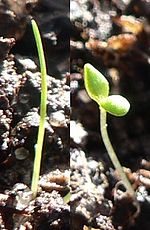 A seedling is a young plant sporophyte
Sporophyte
All land plants, and some algae, have life cycles in which a haploid gametophyte generation alternates with a diploid sporophyte, the generation of a plant or algae that has a double set of chromosomes. A multicellular sporophyte generation or phase is present in the life cycle of all land plants...
developing out of a plant embryo from a seed
Seed
A seed is a small embryonic plant enclosed in a covering called the seed coat, usually with some stored food. It is the product of the ripened ovule of gymnosperm and angiosperm plants which occurs after fertilization and some growth within the mother plant...
. Seedling development starts with germination
Germination
Germination is the process in which a plant or fungus emerges from a seed or spore, respectively, and begins growth. The most common example of germination is the sprouting of a seedling from a seed of an angiosperm or gymnosperm. However the growth of a sporeling from a spore, for example the...
of the seed. A typical young seedling consists of three main parts: the radicle
Radicle
In botany, the radicle is the first part of a seedling to emerge from the seed during the process of germination. The radicle is the embryonic root of the plant, and grows downward in the soil...
(embryonic root), the hypocotyl
Hypocotyl
The hypocotyl is the stem of a germinating seedling, found below the cotyledons and above the radicle .-Dicots:...
(embryonic shoot), and the cotyledon
Cotyledon
A cotyledon , is a significant part of the embryo within the seed of a plant. Upon germination, the cotyledon may become the embryonic first leaves of a seedling. The number of cotyledons present is one characteristic used by botanists to classify the flowering plants...
s (seed leaves). The two classes of flowering plant
Flowering plant
The flowering plants , also known as Angiospermae or Magnoliophyta, are the most diverse group of land plants. Angiosperms are seed-producing plants like the gymnosperms and can be distinguished from the gymnosperms by a series of synapomorphies...
s are distinguished by their numbers of seed leaves: Monocotyledon
Monocotyledon
Monocotyledons, also known as monocots, are one of two major groups of flowering plants that are traditionally recognized, the other being dicotyledons, or dicots. Monocot seedlings typically have one cotyledon , in contrast to the two cotyledons typical of dicots...
s (monocots) have one blade-shaped cotyledon, whereas dicotyledon
Dicotyledon
The dicotyledons, also known as dicots, are a group of flowering plants whose seed typically has two embryonic leaves or cotyledons. There are around 199,350 species within this group...
s (dicots) possess two round cotyledons. Gymnosperm
Gymnosperm
The gymnosperms are a group of seed-bearing plants that includes conifers, cycads, Ginkgo, and Gnetales. The term "gymnosperm" comes from the Greek word gymnospermos , meaning "naked seeds", after the unenclosed condition of their seeds...
s are more varied. For example, pine
Pine
Pines are trees in the genus Pinus ,in the family Pinaceae. They make up the monotypic subfamily Pinoideae. There are about 115 species of pine, although different authorities accept between 105 and 125 species.-Etymology:...
seedlings have up to eight cotyledons. The seedlings of some flowering plants have no cotyledons at all. These are said to be acotyledon
Acotyledon
Acotyledon is used to refer to seed plants or spermatophytes that lack cotyledons, such as orchids and dodder. Orchid seeds are tiny with underdeveloped embryos...
s.

During germination, the young plant emerges from its protective seed coat with its radicle first, followed by the cotyledons. The radicle orients towards gravity, while the hypocotyl orients away from gravity and elongates through cell expansion to push the cotyledons out of the ground.

Dicot seedlings grown in the light develop short hypocotyls and open cotyledons exposing the epicotyl
Epicotyl
In plant physiology, the epicotyl is the embryonic shoot above the cotyledons. In most plants the epicotyl will eventually develop into the leaves of the plant. In dicots, the hypocotyl is what appears to be the base stem under the spent withered cotyledons, and the shoot just above that is the...
. This is also referred to as photomorphogenesis
Photomorphogenesis
In developmental biology, photomorphogenesis is light-mediated development. The photomorphogenesis of plants is often studied by using tightly-frequency-controlled light sources to grow the plants.-Germination:...
. In contrast, seedlings grown in the dark develop long hypocotyl
Hypocotyl
The hypocotyl is the stem of a germinating seedling, found below the cotyledons and above the radicle .-Dicots:...
s and their cotyledons remain closed around the epicotyl in an apical hook. This is referred to as skotomorphogenesis or etiolation
Etiolation
Etiolation is a process in flowering plants grown in partial or complete absence of light. It is characterized by long, weak stems; smaller, sparser leaves due to longer internodes; and a pale yellow color . It increases the likelihood that a plant will reach a light source, often from under the...
. Etiolated seedlings are yellowish in color as chlorophyll
Chlorophyll
Chlorophyll is a green pigment found in almost all plants, algae, and cyanobacteria. Its name is derived from the Greek words χλωρος, chloros and φύλλον, phyllon . Chlorophyll is an extremely important biomolecule, critical in photosynthesis, which allows plants to obtain energy from light...
synthesis and chloroplast
Chloroplast
Chloroplasts are organelles found in plant cells and other eukaryotic organisms that conduct photosynthesis. Chloroplasts capture light energy to conserve free energy in the form of ATP and reduce NADP to NADPH through a complex set of processes called photosynthesis.Chloroplasts are green...
development depend on light. They will open their cotyledons and turn green when treated with light.

In a natural situation, seedling development starts with skotomorphogenesis while the seedling is growing through the soil and attempting to reach the light as fast as possible. During this phase, the cotyledons are tightly closed and form the apical hook to protect the shoot apical meristem from damage while pushing through the soil. In many plants, the seed coat still covers the cotyledons for extra protection.

Upon breaking the surface and reaching the light, the seedling's developmental program is switched to photomorphogenesis. The cotyledons open upon contact with light (splitting the seed coat open, if still present) and become green, forming the first photosynthetic organs of the young plant. Until this stage, the seedling lives off the energy reserves stored in the seed. The opening of the cotyledons exposes the shoot apical meristem and the plumule consisting of the first true leaves of the young plant.

The seedlings sense light through the light receptors phytochrome
Phytochrome
Phytochrome is a photoreceptor, a pigment that plants use to detect light. It is sensitive to light in the red and far-red region of the visible spectrum. Many flowering plants use it to regulate the time of flowering based on the length of day and night and to set circadian rhythms...
(red and far-red light) and cryptochrome
Cryptochrome
Cryptochromes are a class of blue light-sensitive flavoproteins found in plants and animals. Cryptochromes are involved in the circadian rhythms of plants and animals, and in the sensing of magnetic fields in a number of species...
(blue light). Mutation
Mutation
In molecular biology and genetics, mutations are changes in a genomic sequence: the DNA sequence of a cell's genome or the DNA or RNA sequence of a virus. They can be defined as sudden and spontaneous changes in the cell. Mutations are caused by radiation, viruses, transposons and mutagenic...
s in these photo receptors and their signal transduction
Signal transduction
Signal transduction occurs when an extracellular signaling molecule activates a cell surface receptor. In turn, this receptor alters intracellular molecules creating a response...
components lead to seedling development that is at odds with light conditions, for example seedlings that show photomorphogenesis when grown in the dark.

Once the seedling starts to photosynthesize
Photosynthesis
Photosynthesis is a chemical process that converts carbon dioxide into organic compounds, especially sugars, using the energy from sunlight. Photosynthesis occurs in plants, algae, and many species of bacteria, but not in archaea. Photosynthetic organisms are called photoautotrophs, since they can...
, it is no longer dependent on the seed's energy reserves. The apical meristems start growing and give rise to the root
Root
In vascular plants, the root is the organ of a plant that typically lies below the surface of the soil. This is not always the case, however, since a root can also be aerial or aerating . Furthermore, a stem normally occurring below ground is not exceptional either...
and shoot
Shoot
Shoots are new plant growth, they can include stems, flowering stems with flower buds, and leaves. The new growth from seed germination that grows upward is a shoot where leaves will develop...
. The first "true" leaves
Leaf
A leaf is an organ of a vascular plant, as defined in botanical terms, and in particular in plant morphology. Foliage is a mass noun that refers to leaves as a feature of plants....
expand and can often be distinguished from the round cotyledons through their species-dependent distinct shapes. While the plant is growing and developing additional leaves, the cotyledons eventually senesce
Senescence
Senescence or biological aging is the change in the biology of an organism as it ages after its maturity. Such changes range from those affecting its cells and their function to those affecting the whole organism...
and fall off. Seedling growth is also affected by mechanical stimulation, such as by wind or other forms of physical contact, through a process called thigmomorphogenesis
Thigmomorphogenesis
Thigmomorphogenesis is the response by plants to mechanical sensation by altering their growth patterns. In the wild, these patterns can be evinced by wind, raindrops, and rubbing by passing animals....
.
The source of this article is wikipedia, the free encyclopedia.  The text of this article is licensed under the GFDL.