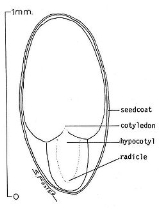 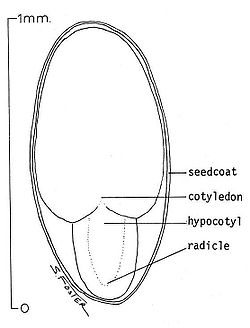 In botany
Botany
Botany, plant science, or plant biology is a branch of biology that involves the scientific study of plant life. Traditionally, botany also included the study of fungi, algae and viruses...
, the radicle is the first part of a seedling
Seedling
thumb|Monocot and dicot seedlingsA seedling is a young plant sporophyte developing out of a plant embryo from a seed. Seedling development starts with germination of the seed. A typical young seedling consists of three main parts: the radicle , the hypocotyl , and the cotyledons...
(a growing plant embryo
Embryo
An embryo is a multicellular diploid eukaryote in its earliest stage of development, from the time of first cell division until birth, hatching, or germination...
) to emerge from the seed
Seed
A seed is a small embryonic plant enclosed in a covering called the seed coat, usually with some stored food. It is the product of the ripened ovule of gymnosperm and angiosperm plants which occurs after fertilization and some growth within the mother plant...
during the process of germination
Germination
Germination is the process in which a plant or fungus emerges from a seed or spore, respectively, and begins growth. The most common example of germination is the sprouting of a seedling from a seed of an angiosperm or gymnosperm. However the growth of a sporeling from a spore, for example the...
. The radicle is the embryonic root
Root
In vascular plants, the root is the organ of a plant that typically lies below the surface of the soil. This is not always the case, however, since a root can also be aerial or aerating . Furthermore, a stem normally occurring below ground is not exceptional either...
of the plant, and grows downward in the soil (the shoot emerges from the plumule). Above the radicle is the embryonic stem
Plant stem
A stem is one of two main structural axes of a vascular plant. The stem is normally divided into nodes and internodes, the nodes hold buds which grow into one or more leaves, inflorescence , conifer cones, roots, other stems etc. The internodes distance one node from another...
or hypocotyl
Hypocotyl
The hypocotyl is the stem of a germinating seedling, found below the cotyledons and above the radicle .-Dicots:...
, supporting the cotyledon
Cotyledon
A cotyledon , is a significant part of the embryo within the seed of a plant. Upon germination, the cotyledon may become the embryonic first leaves of a seedling. The number of cotyledons present is one characteristic used by botanists to classify the flowering plants...
(s).

The radicle emerges from a seed through the micropyle
Micropyle
A micropyle is small opening in the surface of an ovule, through which the pollen tube penetrates, often visible as a small pore in the ripe seed....
. Radicles in seedlings are classified into two main types. Those pointing away from the seed coat scar or hilum
Hilum (biology)
In botany, the hilum is a scar or mark left on a seed coat by the former attachment to the ovary wall or to the funiculus...
are classified as antitropous, and those pointing towards the hilum are syntropous.

If the radicle begins to decay, the seedling undergoes preemergence damping-off. This disease appears on the radicle as darkened spots. Eventually, it causes death of the seedling.