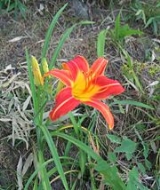 Overview
Monocotyledons, also known as monocots, are one of two major groups of flowering plant
Flowering plant
The flowering plants , also known as Angiospermae or Magnoliophyta, are the most diverse group of land plants. Angiosperms are seed-producing plants like the gymnosperms and can be distinguished from the gymnosperms by a series of synapomorphies...
s (or angiosperms) that are traditionally recognized, the other being dicotyledon
Dicotyledon
The dicotyledons, also known as dicots, are a group of flowering plants whose seed typically has two embryonic leaves or cotyledons. There are around 199,350 species within this group...
s, or dicots. Monocot seedling
Seedling
thumb|Monocot and dicot seedlingsA seedling is a young plant sporophyte developing out of a plant embryo from a seed. Seedling development starts with germination of the seed. A typical young seedling consists of three main parts: the radicle , the hypocotyl , and the cotyledons...
s typically have one cotyledon
Cotyledon
A cotyledon , is a significant part of the embryo within the seed of a plant. Upon germination, the cotyledon may become the embryonic first leaves of a seedling. The number of cotyledons present is one characteristic used by botanists to classify the flowering plants...
(seed
Seed
A seed is a small embryonic plant enclosed in a covering called the seed coat, usually with some stored food. It is the product of the ripened ovule of gymnosperm and angiosperm plants which occurs after fertilization and some growth within the mother plant...
-leaf), in contrast to the two cotyledons typical of dicots. Monocots have been recognized at various taxonomic ranks, and under various names (see below). The APG II system
APG II system
The APG II system of plant classification is the second, now obsolete, version of a modern, mostly molecular-based, system of plant taxonomy that was published in April 2003 by the Angiosperm Phylogeny Group. It was a revision of the first APG system, published in 1998, and was superseded in 2009...
recognises a clade
Clade
A clade is a group consisting of a species and all its descendants. In the terms of biological systematics, a clade is a single "branch" on the "tree of life". The idea that such a "natural group" of organisms should be grouped together and given a taxonomic name is central to biological...
called "monocots" but does not assign it to a taxonomic rank.

According to the IUCN there are 59,300 species
Species
In biology, a species is one of the basic units of biological classification and a taxonomic rank. A species is often defined as a group of organisms capable of interbreeding and producing fertile offspring. While in many cases this definition is adequate, more precise or differing measures are...
of monocots.

Features of a monocot

What does a cotyledon look like in a tulip?

Name the smallest monocotyledonous plant and its family???????