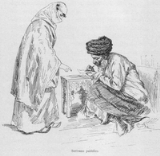 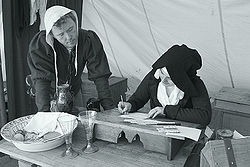 A scrivener (or scribe
Scribe
A scribe is a person who writes books or documents by hand as a profession and helps the city keep track of its records. The profession, previously found in all literate cultures in some form, lost most of its importance and status with the advent of printing...
) was traditionally a person who could read and write
Literacy
Literacy has traditionally been described as the ability to read for knowledge, write coherently and think critically about printed material.Literacy represents the lifelong, intellectual process of gaining meaning from print...
. This usually indicated secretarial
Secretary
A secretary, or administrative assistant, is a person whose work consists of supporting management, including executives, using a variety of project management, communication & organizational skills. These functions may be entirely carried out to assist one other employee or may be for the benefit...
and administrative
Administration (government)
The term administration, as used in the context of government, differs according to jurisdiction.-United States:In United States usage, the term refers to the executive branch under a specific president , for example: the "Barack Obama administration." It can also mean an executive branch agency...
duties such as dictation
Dictation
Dictation can refer to:*Dictation , when one person speaks while another person transcribes what is spoken.*A dictation machine, a device used to record speech for transcription....
and keeping business
Business
A business is an organization engaged in the trade of goods, services, or both to consumers. Businesses are predominant in capitalist economies, where most of them are privately owned and administered to earn profit to increase the wealth of their owners. Businesses may also be not-for-profit...
, judicial, and history
History
History is the discovery, collection, organization, and presentation of information about past events. History can also mean the period of time after writing was invented. Scholars who write about history are called historians...
records for king
Monarch
A monarch is the person who heads a monarchy. This is a form of government in which a state or polity is ruled or controlled by an individual who typically inherits the throne by birth and occasionally rules for life or until abdication...
s, nobles
Nobility
Nobility is a social class which possesses more acknowledged privileges or eminence than members of most other classes in a society, membership therein typically being hereditary. The privileges associated with nobility may constitute substantial advantages over or relative to non-nobles, or may be...
, temple
Temple
A temple is a structure reserved for religious or spiritual activities, such as prayer and sacrifice, or analogous rites. A templum constituted a sacred precinct as defined by a priest, or augur. It has the same root as the word "template," a plan in preparation of the building that was marked out...
s, and cities
Municipality
A municipality is essentially an urban administrative division having corporate status and usually powers of self-government. It can also be used to mean the governing body of a municipality. A municipality is a general-purpose administrative subdivision, as opposed to a special-purpose district...
. Scriveners later developed into public servants, accountant
Accountant
An accountant is a practitioner of accountancy or accounting , which is the measurement, disclosure or provision of assurance about financial information that helps managers, investors, tax authorities and others make decisions about allocating resources.The Big Four auditors are the largest...
s, lawyer
Lawyer
A lawyer, according to Black's Law Dictionary, is "a person learned in the law; as an attorney, counsel or solicitor; a person who is practicing law." Law is the system of rules of conduct established by the sovereign government of a society to correct wrongs, maintain the stability of political...
s and petition writers, etc.

Scriveners remain a common sight in countries where literacy rates remain low; they read letters for illiterate customers, as well as write letters or fill out forms for a fee. Many now use portable typewriters to prepare letters for their clients.

In Japan
Japan
Japan is an island nation in East Asia. Located in the Pacific Ocean, it lies to the east of the Sea of Japan, China, North Korea, South Korea and Russia, stretching from the Sea of Okhotsk in the north to the East China Sea and Taiwan in the south...
, the word is used to refer to legal professions such as judicial scrivener
Judicial scrivener
-Japan:In Japan, are authorized to represent their clients in real estate registrations, commercial registrations , preparation of court documents and filings with legal affairs bureaus...
s and administrative scrivener
Administrative scrivener
, also known as gyosei-shoshi lawyers , form a legal profession in Japan.The primary occupation of administrative scriveners is to prepare and draft not only filings to the national government, local governments or government agencies, but also other documents related to rights, liabilities and...
s.

In the Irish language a "scríbhneoir" is a writer, or a person who writes. It has nearly exactly the same pronunciation as the English word "scrivener".

In ancient times, a scrivener was also called a calligraphus
Calligraphus
A calligraphus was an ancient copyist or scrivener, who transcribed correctly and in its entirety what the notaries had taken down in notes, or minutes—duties similar to the modern work of engrossing....
(pl. calligraphi).

A famous work of fiction featuring scriveners is the short story
Short story
A short story is a work of fiction that is usually written in prose, often in narrative format. This format tends to be more pointed than longer works of fiction, such as novellas and novels. Short story definitions based on length differ somewhat, even among professional writers, in part because...
"Bartleby, the Scrivener" by Herman Melville
Herman Melville
Herman Melville was an American novelist, short story writer, essayist, and poet. He is best known for his novel Moby-Dick and the posthumous novella Billy Budd....
, first published in 1853.

Scrivener notary
Notary
A notary is a lawyer or person with legal training who is licensed by the state to perform acts in legal affairs, in particular witnessing signatures on documents...
tasks generally may include:
The source of this article is wikipedia, the free encyclopedia.  The text of this article is licensed under the GFDL.