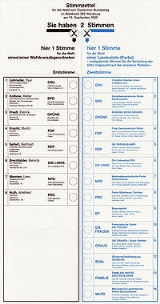 Encyclopedia
A ballot is a device (originally a small ball—see blackball
Blackball (blacklist)
Blackballing is a rejection in a traditional form of secret ballot, where a white ball or ballot constitutes a vote in support and a black ball signifies opposition. This system is typically used where a club's rules provide that, rather than a majority of the votes, one or two objections are...
) used to record choices made by voters. Each voter uses one ballot, and ballots are not shared. In the simplest elections, a ballot may be a simple scrap of paper on which each voter writes in the name of a candidate, but government
Government
Government refers to the legislators, administrators, and arbitrators in the administrative bureaucracy who control a state at a given time, and to the system of government by which they are organized...
al elections use pre-printed to protect the secrecy of the votes
Secret ballot
The secret ballot is a voting method in which a voter's choices in an election or a referendum are anonymous. The key aim is to ensure the voter records a sincere choice by forestalling attempts to influence the voter by intimidation or bribery. The system is one means of achieving the goal of...
. The voter casts his/her ballot in a box
Ballot box
A ballot box is a temporarily sealed container, usually square box though sometimes a tamper resistant bag, with a narrow slot in the top sufficient to accept a ballot paper in an election but which prevents anyone from accessing the votes cast until the close of the voting period...
at a polling station
Polling station
A polling place or polling station is where voters cast their ballots in elections.Since elections generally take place over a one- or two-day span on a periodic basis, often annual or longer, polling places are often located in facilities used for other purposes, such as schools, churches, sports...
. In British English, this is usually called a "ballot paper". The word "ballot" is used for an election process within an organisation (such as a trade union "holding a ballot" of its members).

In ancient Greece
Ancient Greece
Ancient Greece is a civilization belonging to a period of Greek history that lasted from the Archaic period of the 8th to 6th centuries BC to the end of antiquity. Immediately following this period was the beginning of the Early Middle Ages and the Byzantine era. Included in Ancient Greece is the...
, citizens used pieces of broken pottery
Ostracon
An ostracon is a piece of pottery , usually broken off from a vase or other earthenware vessel. In archaeology, ostraca may contain scratched-in words or other forms of writing which may give clues as to the time when the piece was in use...
to scratch in the name of the candidate in the procedures of ostracism. This was done because while papyrus was expensive and had to be imported from Egypt
Egypt
Egypt , officially the Arab Republic of Egypt, Arabic: , is a country mainly in North Africa, with the Sinai Peninsula forming a land bridge in Southwest Asia. Egypt is thus a transcontinental country, and a major power in Africa, the Mediterranean Basin, the Middle East and the Muslim world...
, broken pottery was abundant and virtually free.

The first use of paper ballots to conduct an election appears to have been in Rome
Ancient Rome
Ancient Rome was a thriving civilization that grew on the Italian Peninsula as early as the 8th century BC. Located along the Mediterranean Sea and centered on the city of Rome, it expanded to one of the largest empires in the ancient world....
in 139 BC.

In Ancient India
India
India , officially the Republic of India , is a country in South Asia. It is the seventh-largest country by geographical area, the second-most populous country with over 1.2 billion people, and the most populous democracy in the world...
, around 920 AD, in Tamil Nadu
Tamil Nadu
Tamil Nadu is one of the 28 states of India. Its capital and largest city is Chennai. Tamil Nadu lies in the southernmost part of the Indian Peninsula and is bordered by the union territory of Pondicherry, and the states of Kerala, Karnataka, and Andhra Pradesh...
, Palm leaves were used for village assembly elections. The palm leaves with candidate names, will be put inside a mud pot, for counting. This was called Kudavolai system.

In the United States
United States
The United States of America is a federal constitutional republic comprising fifty states and a federal district...
initially paper ballots were pieces of paper marked and supplied by voters. Later on, political parties and candidates provided preprinted ballots for voters to cast. 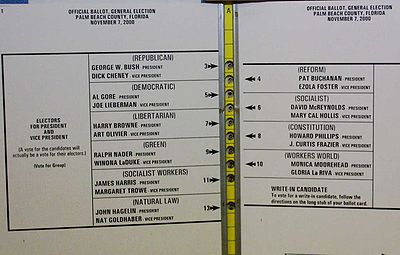 The United States has a unique politics of long and short ballot. Before the Civil War
American Civil War
The American Civil War was a civil war fought in the United States of America. In response to the election of Abraham Lincoln as President of the United States, 11 southern slave states declared their secession from the United States and formed the Confederate States of America ; the other 25...
, many believed democracy
Democracy
Democracy is generally defined as a form of government in which all adult citizens have an equal say in the decisions that affect their lives. Ideally, this includes equal participation in the proposal, development and passage of legislation into law...
was enhanced by increasing the number of elective offices to include such comparatively minor posts as the state-level secretary of state
Secretary of State
Secretary of State or State Secretary is a commonly used title for a senior or mid-level post in governments around the world. The role varies between countries, and in some cases there are multiple Secretaries of State in the Government....
, county surveyor
County surveyor
1. A county surveyor is a public official in many counties of the USA. At the bottom of this page are working "External Links" as at 4 November 2011 to websites of a selection of such County Surveyor's departments. Most of these officials are elected on the partisan ballot to four-year terms...
, register of deeds, county coroner, and city clerk. A larger number of elected offices required longer ballots, and at times the long ballot undoubtedly resulted in confusion and blind voting, though the seriousness of either problem can be disputed. Progressivists
Progressivism in the United States
Progressivism in the United States is a broadly based reform movement that reached its height early in the 20th century and is generally considered to be middle class and reformist in nature. It arose as a response to the vast changes brought by modernization, such as the growth of large...
attacked the long ballot during the Progressive Era
Progressive Era
The Progressive Era in the United States was a period of social activism and political reform that flourished from the 1890s to the 1920s. One main goal of the Progressive movement was purification of government, as Progressives tried to eliminate corruption by exposing and undercutting political...
(circa 1893–1917). In the United States today, the term ballot reform sometimes refers to efforts to reduce the number of elected offices.

Ballot design can aid or inhibit clarity in an election. Poor designs lead to confusion and potentially chaos if large numbers of voters spoil or mismark a ballot. The butterfly ballot used in Florida
Florida
Florida is a state in the southeastern United States, located on the nation's Atlantic and Gulf coasts. It is bordered to the west by the Gulf of Mexico, to the north by Alabama and Georgia and to the east by the Atlantic Ocean. With a population of 18,801,310 as measured by the 2010 census, it...
in the U.S. presidential election, 2000 (a ballot paper that has names down both sides, with a single column of punch holes in the centre, which has been likened to a maze
Maze
A maze is a tour puzzle in the form of a complex branching passage through which the solver must find a route. In everyday speech, both maze and labyrinth denote a complex and confusing series of pathways, but technically the maze is distinguished from the labyrinth, as the labyrinth has a single...
) led to widespread allegations of mismarked ballots. 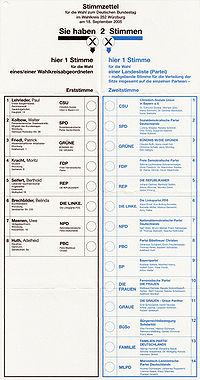 Some political scientists prefer more explicit statement of the voter's actual tolerances and preferences, and believe that failure to reflect these in ballot design and voting system alternatives causes many problems and leads for calls for electoral reform
Electoral reform
Electoral reform is change in electoral systems to improve how public desires are expressed in election results. That can include reforms of:...
. For instance, a non-binding referendum
Referendum
A referendum is a direct vote in which an entire electorate is asked to either accept or reject a particular proposal. This may result in the adoption of a new constitution, a constitutional amendment, a law, the recall of an elected official or simply a specific government policy. It is a form of...
or poll
Opinion poll
An opinion poll, sometimes simply referred to as a poll is a survey of public opinion from a particular sample. Opinion polls are usually designed to represent the opinions of a population by conducting a series of questions and then extrapolating generalities in ratio or within confidence...
, carried out on a ballot, carries much more weight than one carried out with only a public sampling in a less politically committed event than an election. For example, one might count the number of ballots whereon the voter had crossed out the name of the political party
Political party
A political party is a political organization that typically seeks to influence government policy, usually by nominating their own candidates and trying to seat them in political office. Parties participate in electoral campaigns, educational outreach or protest actions...
that nominated the candidate, even if (maybe only if) that voter had voted for him or her. This would indicate support for candidates but would be able to send signals to them that the "party line" was not why that voter voted for them, but rather, she or he expected them to act independently.

Such marking and counting could be carried out on an ordinary ballot with no provision for it, however, there would be risk of counting it as "spoiled" if the marks were unclear, and if ballot design had not allowed for it initially.