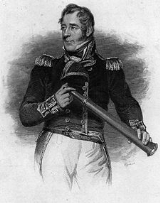 Encyclopedia
Scottish Chileans are Chileans of Scottish descent
Scottish people
The Scottish people , or Scots, are a nation and ethnic group native to Scotland. Historically they emerged from an amalgamation of the Picts and Gaels, incorporating neighbouring Britons to the south as well as invading Germanic peoples such as the Anglo-Saxons and the Norse.In modern use,...
who came from Scotland
Scotland
Scotland is a country that is part of the United Kingdom. Occupying the northern third of the island of Great Britain, it shares a border with England to the south and is bounded by the North Sea to the east, the Atlantic Ocean to the north and west, and the North Channel and Irish Sea to the...
and in some cases, Scots-Irish people from Northern Ireland
Northern Ireland
Northern Ireland is one of the four countries of the United Kingdom. Situated in the north-east of the island of Ireland, it shares a border with the Republic of Ireland to the south and west...
. A large proportion of Scottish Chileans are sheep farmers in the Magallanes
Magallanes
-Chile:* Magallanes y la Antártica Chilena Region** Magallanes Province, within this region** Punta Arenas or Magallanes, the main city in the region and province-Philippines:* Magallanes, Agusan del Norte* Magallanes, Cavite* Magallanes, Sorsogon...
region of the far south of the country, and the city of Punta Arenas has a large Scottish foundation dating back to the 18th century.

A famous Scot, Thomas, Lord Cochrane
Thomas Cochrane, 10th Earl of Dundonald
Admiral Thomas Cochrane, 10th Earl of Dundonald, 1st Marquess of Maranhão, GCB, ODM , styled Lord Cochrane between 1778 and 1831, was a senior British naval flag officer and radical politician....
(later 10th Earl of Dundonald) formed the Chilean Navy
Chilean Navy
-Independence Wars of Chile and Peru :The Chilean Navy dates back to 1817. A year before, following the Battle of Chacabuco, General Bernardo O'Higgins prophetically declared "this victory and another hundred shall be of no significance if we do not gain control of the sea".This led to the...
to help liberate Chile from Spain in the independence period. Chile has developed a strong diplomatic relationship with Great Britain
Great Britain
Great Britain or Britain is an island situated to the northwest of Continental Europe. It is the ninth largest island in the world, and the largest European island, as well as the largest of the British Isles...
and to further invite more British
British people
The British are citizens of the United Kingdom, of the Isle of Man, any of the Channel Islands, or of any of the British overseas territories, and their descendants...
settlers to the country in the 19th century.

The beach resort city Pichilemu
Pichilemu
Pichilemu , originally known as Pichilemo, is a beach resort city and commune in central Chile, and capital of Cardenal Caro Province. It is located southwest of Santiago, the capital of Chile, and comprises an urban center and twenty-three villages, such as Ciruelos, Cáhuil, and Espinillo...
, was developed by Agustín Ross Edwards of the Edwards family
Edwards family
The Edwards family of Chile is of English and Welsh origin with Scottish ancestry, and they became financially and politically influential during the 19th century...
, a financially powerful family of Scottish and English
English people
The English are a nation and ethnic group native to England, who speak English. The English identity is of early mediaeval origin, when they were known in Old English as the Anglecynn. England is now a country of the United Kingdom, and the majority of English people in England are British Citizens...
descent prominent in Chilean society. In part of the region's Scottish settlement and leanings to British
United Kingdom
The United Kingdom of Great Britain and Northern IrelandIn the United Kingdom and Dependencies, other languages have been officially recognised as legitimate autochthonous languages under the European Charter for Regional or Minority Languages...
culture, Pichilemu was sometimes called Pequena Edinburgo or "Little Edinburgh
Edinburgh
Edinburgh is the capital city of Scotland, the second largest city in Scotland, and the eighth most populous in the United Kingdom. The City of Edinburgh Council governs one of Scotland's 32 local government council areas. The council area includes urban Edinburgh and a rural area...
" after Scotland's capital city.

The Chilean government land deals invited settlement from Scotland and Wales in its southern provinces in the 1840s and 1850s. The number of Scottish Chileans is still higher in Patagonia
Patagonia
Patagonia is a region located in Argentina and Chile, integrating the southernmost section of the Andes mountains to the southwest towards the Pacific ocean and from the east of the cordillera to the valleys it follows south through Colorado River towards Carmen de Patagones in the Atlantic Ocean...
and Magallanes regions.

The Mackay School
The Mackay School
The Mackay School, a Chilean school located in Reñaca, Region of Valparaiso, Chile. Of Scottish origin; it was founded in 1857 by Scottish immigrants. It is considered one of the best academic institutions in the fifth region...
, in Viña del Mar
Viña del Mar
Viña del Mar , is a city and commune on central Chile's Pacific coast. Its long stretches of white sandy beaches are a major attraction for national and international tourists. The city is Chile's main tourist attraction. Known as "La Ciudad Jardín" , Viña del Mar is a Chilean Municipality located...
is an example of a school set up by Scottish Chileans. The Scottish and other British Chileans are primarily found in higher education as well in economic management and the country's cultural life.

The Williamson-Balfour Company
Williamson-Balfour Company
The Williamson-Balfour Company was a Scottish owned Chilean company. Its successor company, Williamson Balfour Motors S.A., is a subsidiary of the British company Inchcape plc....
, a Scottish Chilean firm, controlled many aspects of island life, and in 1903 they created a subsidiary, Compania Explotadora de la Isla de Pascua (CEDIP), up until it was handed over to the Chilean Navy
Chilean Navy
-Independence Wars of Chile and Peru :The Chilean Navy dates back to 1817. A year before, following the Battle of Chacabuco, General Bernardo O'Higgins prophetically declared "this victory and another hundred shall be of no significance if we do not gain control of the sea".This led to the...
.

There is the Gran Santiago metropolitan region; followed by the towns of Antofagasta
Antofagasta
Antofagasta is a port city in northern Chile, about north of Santiago. It is the capital of Antofagasta Province and Antofagasta Region. According to the 2002 census, the city has a population of 296,905...
, Chillan
Chillán
Chillán is a city in the Biobío Region of Chile located about south of the country's capital, Santiago, near the geographical center of the country. It is the capital of Ñuble Province and, with a population of approximately 170,000 people , the most populated urban center of this province...
, Concepcion
Concepción, Chile
Concepción is a city in Chile, capital of Concepción Province and of the Biobío Region or Region VIII. Greater Concepción is the second-largest conurbation in the country, with 889,725 inhabitants...
, Coquimbo
Coquimbo
Coquimbo is a port city, commune and capital of the Elqui Province, located on the Pan-American Highway, in the Coquimbo Region of Chile. Coquimbo lies in a valley south of La Serena, with which it forms Greater La Serena with more than 400,000 inhabitants. The commune spans an area around the...
, Iquique
Iquique
Iquique is a port city and commune in northern Chile, capital of both the Iquique Province and Tarapacá Region. It lies on the Pacific coast, west of the Atacama Desert and the Pampa del Tamarugal. It had a population of 216,419 as of the 2002 census...
, Osorno
Osorno, Chile
Osorno is a city and commune in southern Chile and capital of Osorno Province in the Los Lagos Region. It had a population of 145,475, as of the 2002 census...
, Puerto Aisen, Puerto Montt
Puerto Montt
Puerto Montt is a port city and commune in southern Chile, located at the northern end of the Reloncaví Sound in the Llanquihue Province, Los Lagos Region. The commune spans an area of and had a population of 175,938 in 2002. It is located 1,055 km to the south of the capital, Santiago...
, Valdivia
Valdivia
-Geography:*Chile** Valdivia, Chile, a city and municipality in the Province of Valdivia** Valdivia River, a river which begins in the city of Valdivia** Valdivia Province, the Province of Valdivia...
, Valparaiso
Valparaíso
Valparaíso is a city and commune of Chile, center of its third largest conurbation and one of the country's most important seaports and an increasing cultural center in the Southwest Pacific hemisphere. The city is the capital of the Valparaíso Province and the Valparaíso Region...
and Vina Del Mar
Viña del Mar
Viña del Mar , is a city and commune on central Chile's Pacific coast. Its long stretches of white sandy beaches are a major attraction for national and international tourists. The city is Chile's main tourist attraction. Known as "La Ciudad Jardín" , Viña del Mar is a Chilean Municipality located...
.