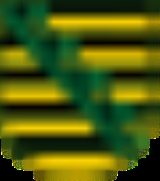 Landkreis Schaumburg was created on August 1, 1977 within the framework of the Kreisreform (district reform) of Lower Saxony
Lower Saxony
Lower Saxony is a German state situated in north-western Germany and is second in area and fourth in population among the sixteen states of Germany...
by combining the former districts of Schaumburg-Lippe and Grafschaft Schaumburg. The town of Hessisch Oldendorf was reallocated to Landkreis Hameln-Pyrmont. The communities of Großenheidorn, Idensermoor-Niengraben and Steinhude had already been allocated to the community of Wunsdorf and thereby became part of Landkreis Hanover
Hanover
Hanover or Hannover, on the river Leine, is the capital of the federal state of Lower Saxony , Germany and was once by personal union the family seat of the Hanoverian Kings of Great Britain, under their title as the dukes of Brunswick-Lüneburg...
.

During the Thirty Years' War
Thirty Years' War
The Thirty Years' War was fought primarily in what is now Germany, and at various points involved most countries in Europe. It was one of the most destructive conflicts in European history....
the House of Schaumburg had no male heir, and the county was divided into Schaumburg (which became part of Hesse-Kassel
Hesse-Kassel
The Landgraviate of Hesse-Kassel or Hesse-Cassel was a state in the Holy Roman Empire under Imperial immediacy that came into existence when the Landgraviate of Hesse was divided in 1567 upon the death of Philip I, Landgrave of Hesse. His eldest son William IV inherited the northern half and the...
) and the County of Schaumburg-Lippe
Schaumburg-Lippe
Schaumburg-Lippe was until 1946 a small state in Germany, located in the present day state of Lower Saxony, with its capital at Bückeburg.- History :...
(1640). As a member of the Confederation of the Rhine
Confederation of the Rhine
The Confederation of the Rhine was a confederation of client states of the First French Empire. It was formed initially from 16 German states by Napoleon after he defeated Austria's Francis II and Russia's Alexander I in the Battle of Austerlitz. The Treaty of Pressburg, in effect, led to the...
, Schaumburg-Lippe raised itself to a principality. In 1815, Schaumburg-Lippe joined the German Confederation
German Confederation
The German Confederation was the loose association of Central European states created by the Congress of Vienna in 1815 to coordinate the economies of separate German-speaking countries. It acted as a buffer between the powerful states of Austria and Prussia...
, and in 1871 the German Empire
German Empire
The German Empire refers to Germany during the "Second Reich" period from the unification of Germany and proclamation of Wilhelm I as German Emperor on 18 January 1871, to 1918, when it became a federal republic after defeat in World War I and the abdication of the Emperor, Wilhelm II.The German...
. In 1918, it became a republic. The tiny Free State of Schaumburg-Lippe
Free State of Schaumburg-Lippe
The Free State of Schaumburg-Lippe was created following the abdication of Prince Adolf II of Schaumburg-Lippe on 15 November 1918. It was a state in Germany during the Weimar Republic, headed by a Minister President. The democratic government was suppressed during Nazi rule...
existed until 1946, when it became an administrative area within Lower Saxony
Lower Saxony
Lower Saxony is a German state situated in north-western Germany and is second in area and fourth in population among the sixteen states of Germany...
. Schaumburg-Lippe had an area of 340 km², and a population of 51,000 (as of 1934).

Hessian Schaumburg was annexed to Prussia
Prussia
Prussia was a German kingdom and historic state originating out of the Duchy of Prussia and the Margraviate of Brandenburg. For centuries, the House of Hohenzollern ruled Prussia, successfully expanding its size by way of an unusually well-organized and effective army. Prussia shaped the history...
along with the rest of Hesse-Kassel in 1866. After World War II
World War II
World War II, or the Second World War , was a global conflict lasting from 1939 to 1945, involving most of the world's nations—including all of the great powers—eventually forming two opposing military alliances: the Allies and the Axis...
, Schaumburg and Schaumburg-Lippe became districts within the state of Lower Saxony
Lower Saxony
Lower Saxony is a German state situated in north-western Germany and is second in area and fourth in population among the sixteen states of Germany...
, until they were merged again in 1977.

The district (Landkreis) of Schaumburg has its northern half located in the North German Plain
North German plain
The North German Plain or Northern Lowland is one of the major geographical regions of Germany. It is the German part of the North European Plain...
and the southern half in the Weser Uplands (Weserbergland). The Weser Uplands consist of hilly ridges and include the Wesergebirge, Harrl, Süntel, Bückeberg and Deister. The Schaumburg Forest
Schaumburg Forest
The Schaumburg Forest is a wooded region, about with an area of around 40 km², in the district of Schaumburg in the German federal state of Lower Saxony.- Location :...
is a continuous strip of woods running in a direction of approximately 60 degrees along the northern border of the district. Just beyond the northern border of the district is Lake Steinhude actually a 29,1 km2 shallow lake that is the largest in Northern Germany. The river Weser flows westward along the south of the Wiehengebirge through a broad valley and the town of Rinteln. The landscape is bordered to the west by the River Weser which is actually in the neighbouring district of Minden-Lübbecke. It flows north through the Westphalian Gap towards the city of Bremen
Bremen
The City Municipality of Bremen is a Hanseatic city in northwestern Germany. A commercial and industrial city with a major port on the river Weser, Bremen is part of the Bremen-Oldenburg metropolitan area . Bremen is the second most populous city in North Germany and tenth in Germany.Bremen is...
and the North Sea
North Sea
In the southwest, beyond the Straits of Dover, the North Sea becomes the English Channel connecting to the Atlantic Ocean. In the east, it connects to the Baltic Sea via the Skagerrak and Kattegat, narrow straits that separate Denmark from Norway and Sweden respectively...
. In the flat North German Plain to the east of Schaumburg district lies Hanover
Hanover
Hanover or Hannover, on the river Leine, is the capital of the federal state of Lower Saxony , Germany and was once by personal union the family seat of the Hanoverian Kings of Great Britain, under their title as the dukes of Brunswick-Lüneburg...
, the capital city of Lower Saxony
Lower Saxony
Lower Saxony is a German state situated in north-western Germany and is second in area and fourth in population among the sixteen states of Germany...
.

The coat of arms
Coat of arms
A coat of arms is a unique heraldic design on a shield or escutcheon or on a surcoat or tabard used to cover and protect armour and to identify the wearer. Thus the term is often stated as "coat-armour", because it was anciently displayed on the front of a coat of cloth...
is almost identical to the old arms of Schaumburg, which had been used since the 12th century. Schaumburg castle, in mediaeval times the seat of the Counts of Schaumburg, is located on the Nesselberg
Nesselberg
The Nesselberg is a ridge up to high in the Calenberg Highland which, together with the Kleiner Deister and the Osterwald, forms a group of three contiguous hill regions in the northwestern part of the Leine Uplands...
("nettle mountain") in Schaumburg, a locality in the town of Rinteln
Rinteln
Rinteln is a small town in Lower Saxony, Germany. It is located on the banks of the Weser river above the Porta Westfalica. Population: 28,500.It is accessed by the A2 autobahn .-History:...
. The nettle
Nettle
Nettles constitute between 24 and 39 species of flowering plants of the genus Urtica in the family Urticaceae, with a cosmopolitan though mainly temperate distribution. They are mostly herbaceous perennial plants, but some are annual and a few are shrubby...
leaf in the middle of the arms has become the heraldic symbol of Holstein, symbolising the historical connection between Holstein and Schaumburg.

Town
Town
A town is a human settlement larger than a village but smaller than a city. The size a settlement must be in order to be called a "town" varies considerably in different parts of the world, so that, for example, many American "small towns" seem to British people to be no more than villages, while...
s