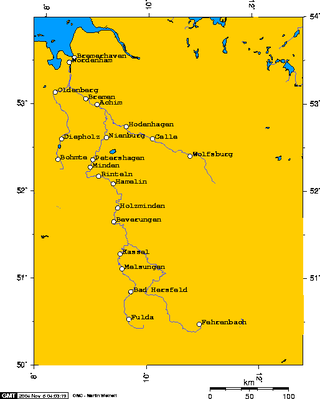 Rinteln is a small town in Lower Saxony
Lower Saxony
Lower Saxony is a German state situated in north-western Germany and is second in area and fourth in population among the sixteen states of Germany...
, Germany
Germany
Germany , officially the Federal Republic of Germany , is a federal parliamentary republic in Europe. The country consists of 16 states while the capital and largest city is Berlin. Germany covers an area of 357,021 km2 and has a largely temperate seasonal climate...
. It is located on the banks of the Weser river above the Porta Westfalica
Porta Westfalica
Porta Westfalica is a town in the district of Minden-Lübbecke, in North Rhine-Westphalia, Germany. The name “Porta Westfalica” is Latin and means “gate to Westphalia”. Coming from the north, the gorge is the entry to the region of Westphalia...
. Population: 28,500.

The settlement of Rinteln was founded about 1150 on the northern bank of the Weser. Later, in 1235, the village of Neu-Rinteln ("New Rinteln") was founded on the southern bank. It is the origin of the today's town, since the northern village was abandoned in 1350 due to the plague
Black Death
The Black Death was one of the most devastating pandemics in human history, peaking in Europe between 1348 and 1350. Of several competing theories, the dominant explanation for the Black Death is the plague theory, which attributes the outbreak to the bacterium Yersinia pestis. Thought to have...
. The village grew to a fortified town, that served as a southern stronghold of the counts of Schaumburg.

From 1621 until its dissolution in 1810 during the Westphalian
Kingdom of Westphalia
The Kingdom of Westphalia was a new country of 2.6 million Germans that existed from 1807-1813. It included of territory in Hesse and other parts of present-day Germany. While formally independent, it was a vassal state of the First French Empire, ruled by Napoleon's brother Jérôme Bonaparte...
rule under Jérôme Bonaparte
Jérôme Bonaparte
Jérôme-Napoléon Bonaparte, French Prince, King of Westphalia, 1st Prince of Montfort was the youngest brother of Napoleon, who made him king of Westphalia...
, Rinteln was the seat of a university. When Schaumburg was divided in 1640, Rinteln became the capital of the eastern part, that retained the name "Grafschaft Schaumburg hessischen Anteils--84.131.46.125 (talk) 17:23, 1 December 2011 (UTC)". The Eulenburg in Rinteln became the seat of the counts. Rinteln remained the capital of the county and later of the district, until it was merged with the neighbouring district of Schaumburg-Lippe in 1977.

Rinteln is twinned
Town twinning
Twin towns and sister cities are two of many terms used to describe the cooperative agreements between towns, cities, and even counties in geographically and politically distinct areas to promote cultural and commercial ties.- Terminology :...
with:
Kendal
Kendal
Kendal, anciently known as Kirkby in Kendal or Kirkby Kendal, is a market town and civil parish within the South Lakeland District of Cumbria, England...
, Cumbria
Cumbria
Cumbria , is a non-metropolitan county in North West England. The county and Cumbria County Council, its local authority, came into existence in 1974 after the passage of the Local Government Act 1972. Cumbria's largest settlement and county town is Carlisle. It consists of six districts, and in...
Sławno, Pomerania
Pomerania
Pomerania is a historical region on the south shore of the Baltic Sea. Divided between Germany and Poland, it stretches roughly from the Recknitz River near Stralsund in the West, via the Oder River delta near Szczecin, to the mouth of the Vistula River near Gdańsk in the East...