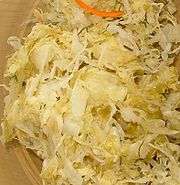 Sauerkraut directly translated from German: "sour cabbage", is finely shredded cabbage
Cabbage
Cabbage is a popular cultivar of the species Brassica oleracea Linne of the Family Brassicaceae and is a leafy green vegetable...
that has been fermented
Fermentation (food)
Fermentation in food processing typically is the conversion of carbohydrates to alcohols and carbon dioxide or organic acids using yeasts, bacteria, or a combination thereof, under anaerobic conditions. Fermentation in simple terms is the chemical conversion of sugars into ethanol...
by various lactic acid bacteria
Lactic acid bacteria
The lactic acid bacteria comprise a clade of Gram-positive, low-GC, acid-tolerant, generally non-sporulating, non-respiring rod or cocci that are associated by their common metabolic and physiological characteristics. These bacteria, usually found in decomposing plants and lactic products, produce...
, including Leuconostoc
Leuconostoc
Leuconostoc is a genus of Gram-positive bacteria, placed within the family of Leuconostocaceae. They are generally ovoid cocci often forming chains. Leuconostoc spp. are intrinsically resistant to vancomycin and are catalase-negative . All species within this genus are heterofermentative and are...
, Lactobacillus
Lactobacillus
Lactobacillus is a genus of Gram-positive facultative anaerobic or microaerophilic rod-shaped bacteria. They are a major part of the lactic acid bacteria group, named as such because most of its members convert lactose and other sugars to lactic acid. They are common and usually benign...
, and Pediococcus
Pediococcus
Pediococcus is a genus of Gram-positive lactic acid bacteria, placed within the family of Lactobacillaceae. They usually occur in pairs or tetrads, and divide along two planes of symmetry, as do the other lactic acid cocci genera Aerococcus and Tetragenococcus. They are purely homofermentative...
. It has a long shelf-life and a distinctive sour flavor, both of which result from the lactic acid
Lactic acid
Lactic acid, also known as milk acid, is a chemical compound that plays a role in various biochemical processes and was first isolated in 1780 by the Swedish chemist Carl Wilhelm Scheele. Lactic acid is a carboxylic acid with the chemical formula C3H6O3...
that forms when the bacteria ferment the sugars in the cabbage. It is therefore not to be confused with coleslaw
Coleslaw
Coleslaw, sometimes simply called slaw in some American dialects, is a salad consisting primarily of shredded raw cabbage. It may also include shredded carrots and other ingredients such as fruits and vegetables, apples, onions, green onions, peppers and various spices.-History:The term "coleslaw"...
, which receives its acidic taste from vinegar
Vinegar
Vinegar is a liquid substance consisting mainly of acetic acid and water, the acetic acid being produced through the fermentation of ethanol by acetic acid bacteria. Commercial vinegar is produced either by fast or slow fermentation processes. Slow methods generally are used with traditional...
.

Sauerkraut is made by a process of pickling
Pickling
Pickling, also known as brining or corning is the process of preserving food by anaerobic fermentation in brine to produce lactic acid, or marinating and storing it in an acid solution, usually vinegar . The resulting food is called a pickle. This procedure gives the food a salty or sour taste...
called lacto-fermentation that is analogous to how traditional (not heat-treated) pickled cucumber
Pickled cucumber
A pickled cucumber is a cucumber that has been pickled in a brine, vinegar, or other solution and left to ferment for a period of time, by either immersing the cucumbers in an acidic solution or through souring by lacto-fermentation.-Gherkin:A gherkin is not only...
s and kimchi
Kimchi
Kimchi , also spelled gimchi, kimchee, or kim chee, is a traditional fermented Korean dish made of vegetables with varied seasonings. There are hundreds of varieties of kimchi made with a main vegetable ingredient such as napa cabbage, radish, green onions or cucumber. It is the most common...
are made. Fully cured sauerkraut keeps for several months in an airtight container stored at or below 15 °C (60 °F). Neither refrigeration nor pasteurization
Pasteurization
Pasteurization is a process of heating a food, usually liquid, to a specific temperature for a definite length of time, and then cooling it immediately. This process slows microbial growth in food...
is required, although these treatments prolong storage life.

Fermentation by lactobacilli
Lactobacillus
Lactobacillus is a genus of Gram-positive facultative anaerobic or microaerophilic rod-shaped bacteria. They are a major part of the lactic acid bacteria group, named as such because most of its members convert lactose and other sugars to lactic acid. They are common and usually benign...
is introduced naturally, as these air-borne bacteria culture on raw cabbage leaves where they grow. Yeasts also are present, and may yield soft sauerkraut of poor flavor when the fermentation temperature is too high. The fermentation process has three phases. In the first phase, anaerobic
Anaerobic organism
An anaerobic organism or anaerobe is any organism that does not require oxygen for growth. It could possibly react negatively and may even die if oxygen is present...
bacteria such as Klebsiella
Klebsiella
Klebsiella is a genus of non-motile, Gram-negative, oxidase-negative, rod-shaped bacteria with a prominent polysaccharide-based capsule. It is named after the German microbiologist Edwin Klebs...
and Enterobacter
Enterobacter
Enterobacter is a genus of common Gram-negative, facultatively-anaerobic, rod-shaped bacteria of the family Enterobacteriaceae. Several strains of the these bacteria are pathogenic and cause opportunistic infections in immunocompromised hosts and in those who are on mechanical ventilation...
lead the fermentation, and begin producing an acidic environment that favours later bacteria. The second phase starts as the acid levels become too high for many bacteria, and Leuconostoc mesenteroides
Leuconostoc mesenteroides
Leuconostoc mesenteroides is a species of bacteria sometimes associated with fermentation, under conditions of salinity and low temperatures.-External links:*...
and other Leuconostoc spp. take dominance. In the third phase, various Lactobacillus species, including L. brevis
Lactobacillus brevis
Lactobacillus brevis is a species of lactic acid bacteria. It can be found in many different environments and in fermented foods such as sauerkraut and pickles. It is also one of the most common causes of beer spoilage. Ingestion has been shown to improve human immune function, and it has been...
and L. plantarum
Lactobacillus plantarum
Lactobacillus plantarum is a widespread member of the genus Lactobacillus, commonly found in many fermented food products as well as anaerobic plant matter. It is also present in saliva . It has the ability to liquefy gelatin. L...
, ferment any remaining sugars, further lowering the pH
PH
In chemistry, pH is a measure of the acidity or basicity of an aqueous solution. Pure water is said to be neutral, with a pH close to 7.0 at . Solutions with a pH less than 7 are said to be acidic and solutions with a pH greater than 7 are basic or alkaline...
. There are unpasteurized sauerkrauts on the market. Properly cured sauerkraut is sufficiently acidic to prevent a favorable environment for the growth of Clostridium botulinum
Clostridium botulinum
Clostridium botulinum is a Gram-positive, rod-shaped bacterium that produces several toxins. The best known are its neurotoxins, subdivided in types A-G, that cause the flaccid muscular paralysis seen in botulism. It is also the main paralytic agent in botox. C. botulinum is an anaerobic...
, the toxins of which cause botulism
Botulism
Botulism also known as botulinus intoxication is a rare but serious paralytic illness caused by botulinum toxin which is metabolic waste produced under anaerobic conditions by the bacterium Clostridium botulinum, and affecting a wide range of mammals, birds and fish...
. 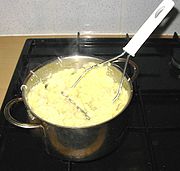 Health benefits have been claimed for raw sauerkraut. It contains vitamin C
Vitamin C
Vitamin C or L-ascorbic acid or L-ascorbate is an essential nutrient for humans and certain other animal species. In living organisms ascorbate acts as an antioxidant by protecting the body against oxidative stress...
, lactobacilli
Lactobacillus
Lactobacillus is a genus of Gram-positive facultative anaerobic or microaerophilic rod-shaped bacteria. They are a major part of the lactic acid bacteria group, named as such because most of its members convert lactose and other sugars to lactic acid. They are common and usually benign...
, and other nutrients. However, the low pH
PH
In chemistry, pH is a measure of the acidity or basicity of an aqueous solution. Pure water is said to be neutral, with a pH close to 7.0 at . Solutions with a pH less than 7 are said to be acidic and solutions with a pH greater than 7 are basic or alkaline...
and abundance of lactobacilli may upset the intestines of people who are not used to eating acidic foods.

Before frozen food
Frozen food
Freezing food preserves it from the time it is prepared to the time it is eaten. Since early times, farmers, fishermen, and trappers have preserved their game and produce in unheated buildings during the winter season. Freezing food slows down decomposition by turning water to ice, making it...
s and the importation of foods from the Southern Hemisphere
Southern Hemisphere
The Southern Hemisphere is the part of Earth that lies south of the equator. The word hemisphere literally means 'half ball' or "half sphere"...
became readily available in northern
Northern Europe
Northern Europe is the northern part or region of Europe. Northern Europe typically refers to the seven countries in the northern part of the European subcontinent which includes Denmark, Estonia, Latvia, Lithuania, Norway, Finland and Sweden...
and central Europe
Central Europe
Central Europe or alternatively Middle Europe is a region of the European continent lying between the variously defined areas of Eastern and Western Europe...
, sauerkraut provided a source of nutrients during the winter. Captain James Cook
James Cook
Captain James Cook, FRS, RN was a British explorer, navigator and cartographer who ultimately rose to the rank of captain in the Royal Navy...
always took a store of sauerkraut on his sea voyages, since experience had taught him it prevented scurvy
Scurvy
Scurvy is a disease resulting from a deficiency of vitamin C, which is required for the synthesis of collagen in humans. The chemical name for vitamin C, ascorbic acid, is derived from the Latin name of scurvy, scorbutus, which also provides the adjective scorbutic...
.

Sauerkraut is also a source of biogenic amine
Biogenic amine
-Examples:Some prominent examples of biogenic amines include:* Histamine - a substance derived from the amino acid histidine that acts as a neurotransmitter mediating arousal and attention, as well as a pro-inflammatory signal released from mast cells in response to allergic reactions or tissue...
s, such as tyramine
Tyramine
Tyramine is a naturally occurring monoamine compound and trace amine derived from the amino acid tyrosine. Tyramine acts as a catecholamine releasing agent...
, which may cause adverse reactions in sensitive people. It also provides various cancer-fighting compounds including isothiocyanate
Isothiocyanate
Isothiocyanate is the chemical group –N=C=S, formed by substituting sulfur for oxygen in the isocyanate group. Many natural isothiocyanates from plants are produced by enzymatic conversion of metabolites called glucosinolates. These natural isothiocyanates, such as allyl isothiocyanate, are also...
and sulphoraphane.

There are many other vegetables that are preserved by a similar process.


Silage
Silage
Silage is fermented, high-moisture fodder that can be fed to ruminants or used as a biofuel feedstock for anaerobic digesters. It is fermented and stored in a process called ensiling or silaging, and is usually made from grass crops, including corn , sorghum or other cereals, using the entire...
, a feed for cattle
Cattle
Cattle are the most common type of large domesticated ungulates. They are a prominent modern member of the subfamily Bovinae, are the most widespread species of the genus Bos, and are most commonly classified collectively as Bos primigenius...
, is also made the same way.