Encyclopedia
Coleslaw, sometimes simply called slaw in some American dialects, is a salad
Salad
Salad is any of a wide variety of dishes, including vegetable salads; salads of pasta, legumes, eggs, or grains; mixed salads incorporating meat, poultry, or seafood; and fruit salads. They may include a mixture of cold and hot, often including raw vegetables or fruits.Green salads include leaf...
consisting primarily of shredded raw cabbage
Cabbage
Cabbage is a popular cultivar of the species Brassica oleracea Linne of the Family Brassicaceae and is a leafy green vegetable...
. It may also include shredded carrot
Carrot
The carrot is a root vegetable, usually orange in colour, though purple, red, white, and yellow varieties exist. It has a crisp texture when fresh...
s and other ingredients such as fruit
Fruit
In broad terms, a fruit is a structure of a plant that contains its seeds.The term has different meanings dependent on context. In non-technical usage, such as food preparation, fruit normally means the fleshy seed-associated structures of certain plants that are sweet and edible in the raw state,...
s and vegetable
Vegetable
The noun vegetable usually means an edible plant or part of a plant other than a sweet fruit or seed. This typically means the leaf, stem, or root of a plant....
s, apples, onions, green onions, peppers and various spices.

The term "coleslaw" arose in the 18th century as an Anglicisation of the Dutch term "koolsla", a shortening of "koolsalade", which means "cabbage salad". It is originally from Ireland and was made at the end of the month from leftover vegetables and cream. 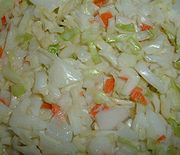 A variety of seasoning
Seasoning
Seasoning is the process of imparting flavor to, or improving the flavor of, food.- General meaning :Seasonings include herbs and spices, which are themselves frequently referred to as "seasonings"...
s, such as celery seed, may be added. The cabbage may come in finely minced pieces, shredded strips, or small squares.

Coleslaw is generally eaten as a side dish
Side dish
A side dish, sometimes referred to as a side order or simply a side, is a food item that accompanies the entrée or main course at a meal.-Common types:...
with foods such as barbecue
Barbecue
Barbecue or barbeque , used chiefly in the United States, Canada, the United Kingdom, New Zealand and Australia is a method and apparatus for cooking meat, poultry and occasionally fish with the heat and hot smoke of a fire, smoking wood, or hot coals of...
, French fries
French fries
French fries , chips, fries, or French-fried potatoes are strips of deep-fried potato. North Americans tend to refer to any pieces of deep-fried potatoes as fries or French fries, while in the United Kingdom, Australia, Ireland and New Zealand, long, thinly cut slices of deep-fried potatoes are...
, and fried chicken
Fried chicken
Fried chicken is a dish consisting of chicken pieces usually from broiler chickens which have been floured or battered and then pan fried, deep fried, or pressure fried. The breading adds a crisp coating or crust to the exterior...
. It may also be used as a sandwich
Sandwich
A sandwich is a food item, typically consisting of two or more slices of :bread with one or more fillings between them, or one slice of bread with a topping or toppings, commonly called an open sandwich. Sandwiches are a widely popular type of lunch food, typically taken to work or school, or...
ingredient, placed on barbecue sandwiches, hamburgers and hot dogs
Carolina style
Carolina style refers to an established set of condiments for hot dogs and hamburgers, originating in the Coastal Plain and Piedmont regions of North Carolina...
along with chili
Chili con carne
Chili con carne is a spicy stew. The name of the dish derives from the Spanish chile con carne, "chili pepper with meat". Traditional versions are made, minimally, from chili peppers, garlic, onions, and cumin, along with chopped or ground beef. Beans and tomatoes are frequently included...
and hot mustard. It is sometimes seen in delicatessens on variants of the Reuben sandwich
Reuben sandwich
The Reuben sandwich is a hot sandwich of layered meat, sauerkraut and Swiss cheese, with a dressing. These are grilled between slices of rye bread. The meat is either corned beef or pastrami, and the dressing is either Russian or Thousand Island dressing...
- with coleslaw substituting for the sauerkraut and dressing, the meat being either pastrami or corned beef, and the sandwich commonly called "Rachel" instead of "Reuben" (also simply "Corned Beef Special"). A variation of coleslaw made with vinegar and oil is often served with pizza in Sweden.

A variation of coleslaw, cheese savoury, is popular in the northeast of England. It includes cheese, onion, and has salad cream
Salad cream
Salad cream is a creamy, yellow condiment based on an emulsion of about 25-50 percent of oil in water, emulsified by egg yolk and acidified by spirit vinegar, and with other ingredients which may include sugar, mustard, salt, thickener, spices, flavouring and colouring. It was introduced in the...
instead of mayonnaise. Another variant, broccoli slaw
Broccoli slaw
Broccoli slaw is a variation of traditional coleslaw with shredded raw broccoli stalks substituted for cabbage. It may also contain mayonnaise, carrots, vinegar or lemon juice, sugar, salt and pepper. It is commonly served at potlucks or "covered dish" parties...
, uses shredded raw broccoli in place of the cabbage.

Other slaws and similar dishes: