Encyclopedia
Santa Maria della Pace is a church in
Churches of Rome
There are more than 900 churches in Rome. Most, but not all, of these are Roman Catholic, with some notable Roman Catholic Marian churches.The first churches of Rome originated in places where Christians met. They were divided into three categories:...
Rome
Rome
Rome is the capital of Italy and the country's largest and most populated city and comune, with over 2.7 million residents in . The city is located in the central-western portion of the Italian Peninsula, on the Tiber River within the Lazio region of Italy.Rome's history spans two and a half...
, central Italy
Italy
Italy , officially the Italian Republic languages]] under the European Charter for Regional or Minority Languages. In each of these, Italy's official name is as follows:;;;;;;;;), is a unitary parliamentary republic in South-Central Europe. To the north it borders France, Switzerland, Austria and...
, not far from Piazza Navona
Piazza Navona
Piazza Navona is a city square in Rome, Italy. It is built on the site of the Stadium of Domitian, built in 1st century AD, and follows the form of the open space of the stadium. The ancient Romans came there to watch the agones , and hence it was known as 'Circus Agonalis'...
.

The current building was built on the foundations of the pre-existing church of Sant'Andrea de Aquarizariis in 1482, commissioned by Pope Sixtus IV
Pope Sixtus IV
Pope Sixtus IV , born Francesco della Rovere, was Pope from 1471 to 1484. His accomplishments as Pope included the establishment of the Sistine Chapel; the group of artists that he brought together introduced the Early Renaissance into Rome with the first masterpiece of the city's new artistic age,...
. The church was rededicated to the Virgin Mary to remember a miraculous bleeding of a Madonna image there in 1480. The author of the original design is not known, though Baccio Pontelli
Baccio Pontelli
Baccio Pontelli was an Italian architect. Baccio is an abbreviation of Bartolomeo.Pontelli was born in Florence. Passing the phase of artistic formation with Giuliano and Benedetto da Maiano in Florence, and influenced by Francesco di Giorgio Martini during the trip to Urbino , he was an in-layer...
has been proposed.

In 1656-1667 Pope Alexander VII
Pope Alexander VII
Pope Alexander VII , born Fabio Chigi, was Pope from 7 April 1655, until his death.- Early life :Born in Siena, a member of the illustrious banking family of Chigi and a great-nephew of Pope Paul V , he was privately tutored and eventually received doctorates of philosophy, law, and theology from...
had the edifice restored by Pietro da Cortona
Pietro da Cortona
Pietro da Cortona, by the name of Pietro Berrettini, born Pietro Berrettini da Cortona, was the leading Italian Baroque painter of his time and also one of the key architects in the emergence of Roman Baroque architecture. He was also an important decorator...
, who also added the famous Baroque façade projecting from its concave wings: this, devised to simulate a theatrical set, has two orders and is entered by a semi-circular pronaos with paired Doric columns
Doric order
The Doric order was one of the three orders or organizational systems of ancient Greek or classical architecture; the other two canonical orders were the Ionic and the Corinthian.-History:...
. The church presses forward almost to fill its tiny piazza; several houses had to be demolished by Pietro da Cortona to create even this miniature trapezoidal space. This newly formed piazza, focussed on the church facade even in its architectural detailing, had the additional benefits of facilitating the turning of coaches which had become so fashionable with the Roman nobility of the time and creating an ingenious unified ensemble of the church in its urban setting. The play of concave and convex forms at varying scales in and around the predominant main facade masks the neighbouring buildings, extends the apparent breadth of the facade and so increases the visual impact on the spectator physically confined by the small trapezoidal piazza. The monumental effect of the plasticity of forms, spatial layering and chiarascuro lighting effects belies the actual scale of this urban intervention.

The inscription around the porch architrave is taken from Psalm 72
Psalms
The Book of Psalms , commonly referred to simply as Psalms, is a book of the Hebrew Bible and the Christian Bible...
: SUSCIPIANT MONTES PACEM POPULO ET COLLES IUSTITIAM ("The mountains shall bring peace to the people and to the hills, justice"). This reference to the 'mountains' of the coat of arms of the Chigi family, to which Alexander VII belonged, is presumably an allusion to the benefits of his papal reign. Oak leaf motifs, another Chigi family emblem, can also be found on the facade. On the upper facade, Cortona had the curved travertine panels cut to make grained matching patterns, in an unusual use of this particular material. Through the tall central window, the circular window of the Quattrocento church facade is visible. 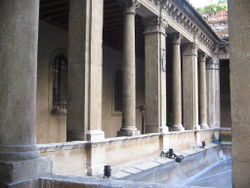 The interior, which can be reached from the original fifteenth-century door, has a short nave with cruciform vaulting and a tribune surmounted by a cupola. Cortona articulated the interior of the dome with octagonal coffering and a series of ribs radiating from the lantern. This is an early example of combining these two forms of dome decoration and was employed by Gianlorenzo Bernini in his later churches at Ariccia
Ariccia
Ariccia is a town and comune in the Province of Rome, central Italy. It is in the Alban Hills of the Lazio region and could be considered an extension of Rome's southeastern suburbs...
and Castelgandolfo.

Carlo Maderno
Carlo Maderno
Carlo Maderno was a Swiss-Italian architect, born in Ticino, who is remembered as one of the fathers of Baroque architecture. His façades of Santa Susanna, St. Peter's Basilica and Sant'Andrea della Valle were of key importance in the evolution of the Italian Baroque...
designed the high altar (1614) to enframe the venerable icon of the Madonna and Child.

Raphael
Raphael
Raffaello Sanzio da Urbino , better known simply as Raphael, was an Italian painter and architect of the High Renaissance. His work is admired for its clarity of form and ease of composition and for its visual achievement of the Neoplatonic ideal of human grandeur...
began to fresco the Four Sibyls receiving angelic instruction (1514) above the arch of the Chigi Chapel, commissioned by Agostino Chigi
Agostino Chigi
Agostino Andrea Chigi was an Italian banker and patron of the Renaissance.Born in Siena, he was the son of the prominent banker Mariano Chigi, a member of an ancient and illustrious house. He moved to Rome around 1487, collaborating with his father...
, the papal banker. The Deposition over the altar is by Cosimo Fancelli
Cosimo Fancelli
Cosimo Fancelli was an Italian sculptor of the Baroque period, active mainly in Rome. He was the son of the artist Carlo Fancelli from Arezzo. Like his brother, the sculptor Giacomo Antonio Fancelli, he began his career as an assistant in the studio of Bernini...
.

The second chapel on the right, the Cesi Chapel, was designed by Antonio da Sangallo the Younger
Antonio da Sangallo the Younger
thumb|250px|The church of Santa Maria di Loreto near the [[Trajan's Market]] in [[Rome]], considered Sangallo's masterwork.thumb|250px|View of St. Patrick's Well in [[Orvieto]]....
, and has a very fine Renaissance decoration on the external arch by Simone Mosca
Simone Mosca
Simone Mosca , also known as Simone Moschini and as Il Moschini, was an Italian sculptor who was born in Settignano . His son was sculptor Francesco Mosca . During the late 1520s and early 1530s Simone worked with Michelangelo on the Medici Chapel in Florence...
, as well as two small frescoes, the Creation of Eve and the Original Sin by Rosso Fiorentino
Rosso Fiorentino
Giovanni Battista di Jacopo , known as Rosso Fiorentino , or Il Rosso, was an Italian Mannerist painter, in oil and fresco, belonging to the Florentine school.-Biography:...
.

The first chapel on the left (Ponzetti Chapel) has noteworthy Renaissance frescoes by Baldassarre Peruzzi, who is better known as an architect. The second chapel has marble taken from the ruins of the Temple of Jupiter Capitolinus.

The tribune has paintings by Carlo Maratta
Carlo Maratta
Carlo Maratta or Maratti was an Italian painter, active mostly in Rome, and known principally for his classicizing paintings executed in a Late Baroque Classical manner. Although he is part of the classical tradition stemming from Raphael, he was not exempt from the influence of Baroque painting...
, Peruzzi, Orazio Gentileschi
Orazio Gentileschi
Orazio Lomi Gentileschi was an Italian Baroque painter, one of more important painters influenced by Caravaggio...
, Francesco Albani
Francesco Albani
Francesco Albani or Albano was an Italian Baroque painter.-Early years in Bologna:Born 1578 in Bologna, his father was a silk merchant who intended to instruct his son in the same trade; but by age twelve, Albani became an apprentice under the competent mannerist painter Denis Calvaert, where he...
and others.

A main feature of the church and monastery complex is the Bramante cloister. Built in 1500-1504 for Cardinal Oliviero Carafa
Oliviero Carafa
Oliviero Carafa was an Italian cardinal and diplomat of the Renaissance. Like the majority of his era's prelates, he displayed the lavish and conspicuous standard of living that was expected of a prince of the Church...
, it was the first work of Donato Bramante
Donato Bramante
Donato Bramante was an Italian architect, who introduced the Early Renaissance style to Milan and the High Renaissance style to Rome, where his most famous design was St...
in the city. It has two levels: the first is articulated by shallow pilasters set against an arcade; the second also has pilasters set against an arcade which is vertically continuous with the lower storey, but with columns located in between each arch span.