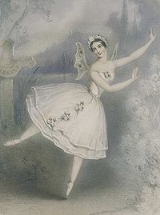 Encyclopedia
Giselle is a ballet
Ballet
Ballet is a type of performance dance, that originated in the Italian Renaissance courts of the 15th century, and which was further developed in France and Russia as a concert dance form. The early portions preceded the invention of the proscenium stage and were presented in large chambers with...
in two acts with a libretto
Libretto
A libretto is the text used in an extended musical work such as an opera, operetta, masque, oratorio, cantata, or musical. The term "libretto" is also sometimes used to refer to the text of major liturgical works, such as mass, requiem, and sacred cantata, or even the story line of a...
by Jules-Henri Vernoy de Saint-Georges and Théophile Gautier
Théophile Gautier
Pierre Jules Théophile Gautier was a French poet, dramatist, novelist, journalist, art critic and literary critic....
, music by Adolphe Adam
Adolphe Adam
Adolphe Charles Adam was a French composer and music critic. A prolific composer of operas and ballets, he is best known today for his ballets Giselle and Le corsaire , his operas Le postillon de Lonjumeau , Le toréador and Si j'étais roi , and his Christmas...
, and choreography by Jean Coralli
Jean Coralli
Jean Coralli , born Jean Coralli Peracini, was a French dancer and choreographer and later held the esteemed post of First Balletmaster of the Paris Opera Ballet...
and Jules Perrot
Jules Perrot
Jules-Joseph Perrot was a dancer and choreographer who later became Balletmaster of the Imperial Ballet in St. Petersburg, Russia...
. The librettist took his inspiration from a poem by Heinrich Heine
Heinrich Heine
Christian Johann Heinrich Heine was one of the most significant German poets of the 19th century. He was also a journalist, essayist, and literary critic. He is best known outside Germany for his early lyric poetry, which was set to music in the form of Lieder by composers such as Robert Schumann...
. The ballet tells the story of a peasant girl named Giselle whose ghost, after her premature death, protects her lover from the vengeance of a group of evil female spirits called Wilis
Slavic fairies
Fairies in Slavic mythology come in several forms and their names are spelled differently based on the specific language. Among the ones listed below there were also khovanets , dolia , polyovyk or polevoi , perelesnyk , lesovyk or leshyi , blud , mara Fairies in Slavic mythology come in several...
(a type of Slavic fairy also spelled Vila, Wila, Wiła, Veela). Giselle was first presented by the Ballet du Théâtre de l'Académie Royale de Musique at the Salle Le Peletier in Paris, France, on 28 June 1841. The choreography in modern productions generally derives from the revivals of Marius Petipa
Marius Petipa
Victor Marius Alphonse Petipa was a French ballet dancer, teacher and choreographer. Petipa is considered to be the most influential ballet master and choreographer of ballet that has ever lived....
for the Imperial Russian Ballet (1884, 1899, 1903).

The pervasive atmosphere of the ballet was indebted to the works of Victor Hugo
Victor Hugo
Victor-Marie Hugo was a Frenchpoet, playwright, novelist, essayist, visual artist, statesman, human rights activist and exponent of the Romantic movement in France....
, Heinrich Heine
Heinrich Heine
Christian Johann Heinrich Heine was one of the most significant German poets of the 19th century. He was also a journalist, essayist, and literary critic. He is best known outside Germany for his early lyric poetry, which was set to music in the form of Lieder by composers such as Robert Schumann...
, and the ballet critic Théophile Gautier
Théophile Gautier
Pierre Jules Théophile Gautier was a French poet, dramatist, novelist, journalist, art critic and literary critic....
. The librettist Verney de Saint-Georges had first been attracted to Hugo's Orientales with its evocation of a ballroom where dancers were condemned to dance all night, and to Heine's De l'Allemagne and its depiction of the Wilis, Slavonic supernatural beings who lured young men to death by dancing. The notion may have been based on St. Vitus's dance, the dancing mania of the Middle Ages.

The ballet is set in the Rhineland of the Middle Ages during the grape harvest. When the curtain rises on the first act, the cottage of Giselle and her mother Berthe are seen on one side, and opposite is seen the cottage of Duke Albrecht of Silesia, a nobleman who has disguised himself as a peasant named Loys, in order to sow a few wild oats before his marriage to Bathilde, the daughter of the Prince of Courland. Against the advice of his squire Wilfrid, Albrecht flirts with Giselle, who falls completely in love with him. Hilarion, a gamekeeper, is also in love with Giselle and warns the girl against trusting the stranger, but Giselle refuses to listen. Albrecht and Giselle dance a love duet, with Giselle picking the petals from a daisy to divine her lover's sincerity. The couple is interrupted by Giselle's mother, who, worried about her daughter's fragile health, ushers the girl into the cottage.

Horns are heard in the distance and Loys retreats from the scene. A hunting party enters and refreshments are served. Among the hunters are Bathilde and her father. Giselle returns to the scene, dances for the party, and receives a necklace from Bathilde. When the party departs, Loys reappears with the grape harvesters. A celebration begins. Giselle and the harvesters dance but the merriment is brought to a halt by Hilarion who, having investigated the Duke's cottage now brandishes the nobleman's horn and sword. The horn is sounded, and the hunting party returns. The truth about Loys (Albrecht) is learned and Giselle goes mad and dies. Although Giselle takes Albrecht's sword, her death is actually a result of her weak heart.

The second act is set in a moonlit glade near Giselle's grave. Hilarion is grieving Giselle's death. He is frightened from the glade by the Wilis, female spirits who, jilted before their wedding day, rise from their graves at night and seek revenge upon men by dancing them to death. Giselle is summoned from her grave and welcomed by the supernatural creatures who then quickly disappear. Albrecht enters searching for Giselle's grave, and she appears before him. He begs forgiveness. Giselle, her love undiminished, readily forgives him and the two dance. The scene ends with Albrecht in pursuit of Giselle as she disappears into the forest.

The ballet was first presented at the Paris Opéra's Salle Le Peletier on 28 June 1841 with Carlotta Grisi
Carlotta Grisi
Carlotta Grisi, real name Caronne Adele Josephine Marie Grisi was an Italian ballet dancer born in Visinada, Istria . She was trained at the ballet school of Teatro alla Scala in Milan and later with dancer/balletmaster Jules Perrot...
as Giselle, Lucien Petipa
Lucien Petipa
Lucien Petipa was a French ballet dancer in the early 19th century and was the brother of the famous balletmaster of the Russian Imperial Ballet , Marius Petipa...
as Albrecht, and Jean Coralli
Jean Coralli
Jean Coralli , born Jean Coralli Peracini, was a French dancer and choreographer and later held the esteemed post of First Balletmaster of the Paris Opera Ballet...
as Hilarion. Scenery was designed by Pierre Ciceri and costumes by Paul Lormier. On 12 March 1842, the ballet was first presented in England at Her Majesty's Theatre, London with Carlotta Grisi and Jules Perrot
Jules Perrot
Jules-Joseph Perrot was a dancer and choreographer who later became Balletmaster of the Imperial Ballet in St. Petersburg, Russia...
in the principal roles and Louise Fleury as Myrtha, and, on 30 December of the same year, the ballet was first presented in St. Petersburg at the Bolshoi Theatre with Elena Andreyanova as Giselle. In Italy, it was first presented in Milan at Teatro alla Scala on 17 January 1843 with choreography by A. Cortesi and music by N. Bajetti. In the United States, the ballet premiered at the Howard Atheneum, Boston on January 1, 1846 with Mary Ann Lee and George Washington Smith in the principal roles.

The version passed down to the present day was staged by Marius Petipa
Marius Petipa
Victor Marius Alphonse Petipa was a French ballet dancer, teacher and choreographer. Petipa is considered to be the most influential ballet master and choreographer of ballet that has ever lived....
for the Imperial Ballet
Mariinsky Ballet
The Mariinsky Ballet is a classical ballet company based at the Mariinsky Theatre in Saint Petersburg, Russia. Founded in the 18th century and originally known as the Imperial Russian Ballet, the Mariinsky Ballet is one of the world's leading ballet companies...
(today the Kirov/Mariinsky Ballet). Petipa staged his definitive revival of Giselle in 1884 for the Ballerina Maria Gorshenkova, but made his final touches to the work for Anna Pavlova's debut in 1903. It is said that the Kirov/Mariinsky Ballet still dance the ballet in Petipa's original design nearly unchanged. Petipa's final work on Giselle was notated in the Stepanov method of choreographic notation around the turn of the 20th century, and is today held as part of the famous Sergeyev Collection
Sergeyev Collection
The Sergeyev Collection is a collection of choreographic notation, music, photos, décor and costume designs, theatre programs and various other materials relating to the repertory of the Imperial Ballet of St. Petersburg, Russia at the turn of the 20th century...
in the Harvard University Library Theatre Collection
Harvard University
Harvard University is a private Ivy League university located in Cambridge, Massachusetts, United States, established in 1636 by the Massachusetts legislature. Harvard is the oldest institution of higher learning in the United States and the first corporation chartered in the country...
.


Résumé of scenes and dances

American Ballet Theatre
American Ballet Theatre
American Ballet Theatre , based in New York City, was one of the foremost ballet companies of the 20th century. It continues as a leading dance company in the world today...
's first Giselle was Annabelle Lyon
Annabelle Lyon (dancer)
Annabelle Lyon was raised in Memphis, where father Max ran a chain of grocery stores...
, partnered by Anton Dolin
Anton Dolin
Sir Anton Dolin was an English ballet dancer and choreographer.Dolin was born in Slinfold in Sussex as Sydney Francis Patrick Chippendall Healey-Kay but was generally known as Patrick Kay. He joined Sergei Diaghilev's Ballets Russes in 1921, was a principal there from 1924, and was a principal...
January 12, 1940,