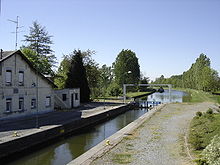 The Sambre-Oise Canal is located in northern France
France
The French Republic , The French Republic , The French Republic , (commonly known as France , is a unitary semi-presidential republic in Western Europe with several overseas territories and islands located on other continents and in the Indian, Pacific, and Atlantic oceans. Metropolitan France...
. It forms a connection between the river Sambre
Sambre
The Sambre is a river in northern France and Wallonia, southern Belgium, left tributary of the Meuse River. The ancient Romans called the river Sabis.-Course:...
(Meuse
Meuse River
The Maas or Meuse is a major European river, rising in France and flowing through Belgium and the Netherlands before draining into the North Sea...
basin) at Landrecies
Landrecies
Landrecies is a commune in the Nord department in northern France.It is the site of a skirmish between the British I Corps under Douglas Haig and the German Fifth Army on 25 August 1914.-Heraldry:-People:...
and the Oise
Oise River
The River Oise is a right tributary of the River Seine, flowing for 302 km in Belgium and France. Its source is in the Belgian province Hainaut, south of the town Chimay. It crosses the border with France after about 20 km. It flows into the Seine in Conflans-Sainte-Honorine, near Paris...
(Seine
Seine
The Seine is a -long river and an important commercial waterway within the Paris Basin in the north of France. It rises at Saint-Seine near Dijon in northeastern France in the Langres plateau, flowing through Paris and into the English Channel at Le Havre . It is navigable by ocean-going vessels...
basin) at Tergnier
Tergnier
Tergnier is a commune in the Aisne department in Picardy in northern France.-Population:...
. The canal is 71 km long, and has 38 locks
Lock (water transport)
A lock is a device for raising and lowering boats between stretches of water of different levels on river and canal waterways. The distinguishing feature of a lock is a fixed chamber in which the water level can be varied; whereas in a caisson lock, a boat lift, or on a canal inclined plane, it is...
. It is only suited for small boats, maximum length 38.5 m.

The forcing of the Sambre-Oise Canal took place on November 4, 1918. Participating in the operation were the 2nd Battalion Royal Sussex
Royal Sussex Regiment
The Royal Sussex Regiment was an infantry regiment of the British Army from 1881 to 1966. The regiment was formed as part of the Childers reforms by the amalgamation of the 35th Regiment of Foot and the 107th Regiment of Foot...
, as well as the 2nd Manchesters
The Manchester Regiment
The Manchester Regiment was a regiment of the British army, formed in 1881 by the amalgamation of the 63rd Regiment of Foot and the 96th Regiment of Foot...
, to which the poet
Poet
A poet is a person who writes poetry. A poet's work can be literal, meaning that his work is derived from a specific event, or metaphorical, meaning that his work can take on many meanings and forms. Poets have existed since antiquity, in nearly all languages, and have produced works that vary...
Wilfred Owen
Wilfred Owen
Wilfred Edward Salter Owen MC was an English poet and soldier, one of the leading poets of the First World War...
belonged. The Lancashire Fusiliers
Lancashire Fusiliers
The Lancashire Fusiliers was a British infantry regiment that was amalgamated with other Fusilier regiments in 1968 to form the Royal Regiment of Fusiliers.- Formation and early history:...
also took part in the battle. The British forces were to cross some fields surrounded by high hedges, then cross the canal
Canal
Canals are man-made channels for water. There are two types of canal:#Waterways: navigable transportation canals used for carrying ships and boats shipping goods and conveying people, further subdivided into two kinds:...
at a point where there was a lockhouse. The German
Germany
Germany , officially the Federal Republic of Germany , is a federal parliamentary republic in Europe. The country consists of 16 states while the capital and largest city is Berlin. Germany covers an area of 357,021 km2 and has a largely temperate seasonal climate...
s had this area defended with machine gun
Machine gun
A machine gun is a fully automatic mounted or portable firearm, usually designed to fire rounds in quick succession from an ammunition belt or large-capacity magazine, typically at a rate of several hundred rounds per minute....
s and rifle
Rifle
A rifle is a firearm designed to be fired from the shoulder, with a barrel that has a helical groove or pattern of grooves cut into the barrel walls. The raised areas of the rifling are called "lands," which make contact with the projectile , imparting spin around an axis corresponding to the...
teams.

As the 2nd Battalion advanced on the canal, the Royal Engineers
Royal Engineers
The Corps of Royal Engineers, usually just called the Royal Engineers , and commonly known as the Sappers, is one of the corps of the British Army....
placed small footbridge
Footbridge
A footbridge or pedestrian bridge is a bridge designed for pedestrians and in some cases cyclists, animal traffic and horse riders, rather than vehicular traffic. Footbridges complement the landscape and can be used decoratively to visually link two distinct areas or to signal a transaction...
s across the lock. Some Royal Sussex Regiment men actually climbed up onto the lock gates, one of them firing his Lewis gun
Lewis Gun
The Lewis Gun is a World War I–era light machine gun of American design that was perfected and widely used by the British Empire. It was first used in combat in World War I, and continued in service with a number of armed forces through to the end of the Korean War...
from the hip as he went. Eventually the British managed to take the lockhouse and pushed on to their final objective near the Étreux
Étreux
Étreux is a commune in the Aisne department in Picardy in northern France.-History:The first major engagement of the British Expeditionary Force in the First World War in August 1914, resulted in what became known as the Great Retreat during the Battle of Mons, in the course of which a strategic...
road.

Wilfred Owen
Wilfred Owen
Wilfred Edward Salter Owen MC was an English poet and soldier, one of the leading poets of the First World War...
, officer and poet, was killed as he crossed the Sambre-Oise Canal at the head of a raiding party: Owen's death occurred only a week before the war ended.
The source of this article is wikipedia, the free encyclopedia.  The text of this article is licensed under the GFDL.