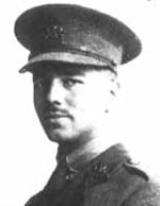 Overview
Wilfred Edward Salter Owen MC
Military Cross
The Military Cross is the third-level military decoration awarded to officers and other ranks of the British Armed Forces; and formerly also to officers of other Commonwealth countries....
(18 March 1893 – 4 November 1918) was an English poet and soldier, one of the leading poets of the First World War
World War I
World War I , which was predominantly called the World War or the Great War from its occurrence until 1939, and the First World War or World War I thereafter, was a major war centred in Europe that began on 28 July 1914 and lasted until 11 November 1918...
. His shocking, realistic war poetry on the horrors of trenches
Trench warfare
Trench warfare is a form of occupied fighting lines, consisting largely of trenches, in which troops are largely immune to the enemy's small arms fire and are substantially sheltered from artillery...
and gas
Poison gas in World War I
The use of chemical weapons in World War I ranged from disabling chemicals, such as tear gas and the severe mustard gas, to lethal agents like phosgene and chlorine. This chemical warfare was a major component of the first global war and first total war of the 20th century. The killing capacity of...
warfare was heavily influenced by his friend Siegfried Sassoon
Siegfried Sassoon
Siegfried Loraine Sassoon CBE MC was an English poet, author and soldier. Decorated for bravery on the Western Front, he became one of the leading poets of the First World War. His poetry both described the horrors of the trenches, and satirised the patriotic pretensions of those who, in Sassoon's...
and stood in stark contrast to both the public perception of war at the time, and to the confidently patriotic verse written earlier by war poets such as Rupert Brooke
Rupert Brooke
Rupert Chawner Brooke was an English poet known for his idealistic war sonnets written during the First World War, especially The Soldier...
.

When did u join the army
More

What countries did u fight
More

Bent double, like old beggars under sacks,Knock-kneed, coughing like hags, we cursed through sludge,Till on the haunting flares we turned our backsAnd towards our distant rest began to trudge.

Men marched asleep. Many had lost their bootsBut limped on, blood-shod.

Gas! GAS! Quick, boys! — An ecstasy of fumbling,Fitting the clumsy helmets just in time;But someone still was yelling out and stumbling,And flound'ring like a man in fire or lime...Dim, through the misty panes and thick green light,As under a green sea, I saw him drowning.

He dropped, — more sullenly than wearily,Lay stupid like a cod, heavy like meat,And none of us could kick him to his feet;— Just blinked at my revolver, blearily;— Didn't appear to know a war was on,Or see the blasted trench at which he stared.

What passing-bells for these who die as cattle?— Only the monstrous anger of the guns.Only the stuttering rifles' rapid rattleCan patter out their hasty orisons.No mockeries now for them; no prayers nor bells;Nor any voice of mourning save the choirs, —The shrill, demented choirs of wailing shells;And bugles calling for them from sad shires.