Encyclopedia
Saluzzo is a town and former principality in the province of Cuneo
Province of Cuneo
ayr is a province in the southwest of the Piedmont region of Italy. To the west it borders on the French region of Provence-Alpes-Côte d'Azur ....
, Piedmont
Piedmont
Piedmont is one of the 20 regions of Italy. It has an area of 25,402 square kilometres and a population of about 4.4 million. The capital of Piedmont is Turin. The main local language is Piedmontese. Occitan is also spoken by a minority in the Occitan Valleys situated in the Provinces of...
region, Italy
Italy
Italy , officially the Italian Republic languages]] under the European Charter for Regional or Minority Languages. In each of these, Italy's official name is as follows:;;;;;;;;), is a unitary parliamentary republic in South-Central Europe. To the north it borders France, Switzerland, Austria and...
.

The city of Saluzzo is built on a hill overlooking a vast, well-cultivated plain. Iron, lead, silver, marble, slate etc. are found in the surrounding mountains.
It has a population of approximately 16,000.

Saluzzo (Salusse in Piemontese
Piemontese
Piemontese* Guardia Piemontese* Bonarda Piemontese* Tarocco Piemontese* Piedmontese language...
) was a civitas (tribal city state) of the Vagienni, or mountain Ligures
Ligures
The Ligures were an ancient people who gave their name to Liguria, a region of north-western Italy.-Classical sources:...
, and later of the Salluvii. This district was brought under Roman control by the Consul Marcus Fulvius
Marcus Fulvius Flaccus (consul 125 BC)
Marcus Fulvius Flaccus was a Roman senator and an ally of the Gracchi. He became an administrator of the agrarian reform in 130 BC, and as a solution to the problem of land division among the allied cities, proposed Roman citizenship for the allies' citizens, thus introducing a question that vexed...
.

In the Carolingian
Carolingian
The Carolingian dynasty was a Frankish noble family with origins in the Arnulfing and Pippinid clans of the 7th century AD. The name "Carolingian", Medieval Latin karolingi, an altered form of an unattested Old High German *karling, kerling The Carolingian dynasty (known variously as the...
age it became the residence of a count
Count
A count or countess is an aristocratic nobleman in European countries. The word count came into English from the French comte, itself from Latin comes—in its accusative comitem—meaning "companion", and later "companion of the emperor, delegate of the emperor". The adjective form of the word is...
; later, having passed to the Marquesses of Susa
Susa, Italy
Susa is a city and comune in Piedmont, Italy. It is situated on at the confluence of the Cenischia with the Dora Riparia, a tributary of the Po River, at the foot of the Cottian Alps, 51 km west of Turin.-History:...
, Manfred I, son of Marquess Bonifacio del Vasto, on the division of that principality became Marquess of Saluzzo; this family held the marquisate of Saluzzo from 1142 to 1548. The marquisate embraced the territory lying between the Alps, the Po and the Stura, and was extended on several occasions. In the Middle Ages it had a chequered existence, often being in conflict with powerful neighbours, chiefly the Counts (later Dukes) of Savoy. After Manfred II's death, his widow had to accept a series of tributes, which were to be later the base of the House of Savoy
House of Savoy
The House of Savoy was formed in the early 11th century in the historical Savoy region. Through gradual expansion, it grew from ruling a small county in that region to eventually rule the Kingdom of Italy from 1861 until the end of World War II, king of Croatia and King of Armenia...
's claims over the increasingly feebler marquises' territories. Thomas III
Thomas III of Saluzzo
-Biography:He was born in Saluzzo in north-western Italy to Frederick II del Vasto and Beatrice of Geneva. His maternal grandfather was Hugh of Geneva, Lord of Gex, Anthon and Varey....
, a vassal of France, wrote the romance Le chevalier errant ('the knight-errant').

Ludovico I
Ludovico I of Saluzzo
Ludovico I del Vasto was Marquess of Saluzzo from 1416 until his death.The son of Marquess Thomas III, he held the Marquisate of Saluzzo for much of the 15th century, under its period of greatest splendour...
(1416–75) started the Golden Age of the city and imposed himself as a mediator between the neighbouring powers. Ludovico II
Ludovico II of Saluzzo
Ludovico II del Vasto was marquess of Saluzzo from 1475 until his death. Before his accession ar marquis he held the title of Count of Carmagnola....
constructed a tunnel, no longer in use, through the Monviso, a remarkable work for the time. With the help of the French he resisted a vigorous siege by the Duke of Savoy in 1486, but in 1487 yielded and retired to France where he wrote L'art de la chevalerie sous Vegèce ("The art of chivalry under Vegetius", 1488), a treatise on good government, and other works on military affairs. He was a patron
Patrón
Patrón is a luxury brand of tequila produced in Mexico and sold in hand-blown, individually numbered bottles.Made entirely from Blue Agave "piñas" , Patrón comes in five varieties: Silver, Añejo, Reposado, Gran Patrón Platinum and Gran Patrón Burdeos. Patrón also sells a tequila-coffee blend known...
of clerics and authors. In 1490 Ludovico regained power, but after his deaths his sons struggled longly for the rule and impoverished the state.

After long struggles for independence, the marquisate was occupied (1548) by the French, as a fief of the Crown of France
France
The French Republic , The French Republic , The French Republic , (commonly known as France , is a unitary semi-presidential republic in Western Europe with several overseas territories and islands located on other continents and in the Indian, Pacific, and Atlantic oceans. Metropolitan France...
- with the name of Saluces - and remained part of that kingdom until it was ceded to Savoy
Savoy
Savoy is a region of France. It comprises roughly the territory of the Western Alps situated between Lake Geneva in the north and Monaco and the Mediterranean coast in the south....
in 1601. In 1588 Charles Emmanuel I of Savoy took possession of the city. Thenceforward Saluzzo shared the destinies of Piedmont, with which it formed "one of the keys of the house" of Italy.

The area is also the setting of Chaucer's
Geoffrey Chaucer
Geoffrey Chaucer , known as the Father of English literature, is widely considered the greatest English poet of the Middle Ages and was the first poet to have been buried in Poet's Corner of Westminster Abbey...
Clerk's Tale
The Clerk's Prologue and Tale
The Clerk's Tale is the first tale of Group E in Geoffrey Chaucer's The Canterbury Tales. It is preceded by The Summoner's Tale and followed by The Merchant's Tale. The Clerk of Oxenford is a student of what would nowadays be considered philosophy or theology...
in The Canterbury Tales
The Canterbury Tales
The Canterbury Tales is a collection of stories written in Middle English by Geoffrey Chaucer at the end of the 14th century. The tales are told as part of a story-telling contest by a group of pilgrims as they travel together on a journey from Southwark to the shrine of Saint Thomas Becket at...
http://classiclit.about.com/library/bl-etexts/gchaucer/bl-gchau-can-clerk.htm. 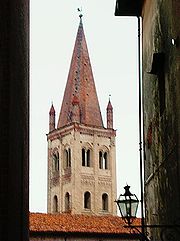