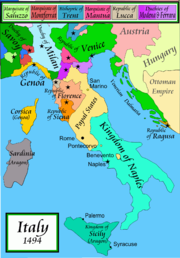 The marquesses of Saluzzo were the medieval feudal rulers city of Saluzzo
Saluzzo
Saluzzo is a town and former principality in the province of Cuneo, Piedmont region, Italy.The city of Saluzzo is built on a hill overlooking a vast, well-cultivated plain. Iron, lead, silver, marble, slate etc...
(Piedmont
Piedmont
Piedmont is one of the 20 regions of Italy. It has an area of 25,402 square kilometres and a population of about 4.4 million. The capital of Piedmont is Turin. The main local language is Piedmontese. Occitan is also spoken by a minority in the Occitan Valleys situated in the Provinces of...
) and its countryside from 1175 to 1549. Originally counts, the family received in feudum the city from the margrave of Turin, Ulric Manfred. It passed to the margrave of Susa, of the del Vasto
Adelaide del Vasto
Adelaide del Vasto was the third wife of Roger I of Sicily and mother of Roger II of Sicily, as well as Queen consort of Jerusalem due to her later marriage to Baldwin I of Jerusalem, as his third wife.-Family:She was the daughter of Manfred del Vasto Adelaide del Vasto (Adelasia, Azalaïs) (c....
family of Savona
Savona
Savona is a seaport and comune in the northern Italian region of Liguria, capital of the Province of Savona, in the Riviera di Ponente on the Mediterranean Sea....
, and, in 1175, it was raised to margravial status by the Emperor Frederick I. In 1549, it was annexed to France
France
The French Republic , The French Republic , The French Republic , (commonly known as France , is a unitary semi-presidential republic in Western Europe with several overseas territories and islands located on other continents and in the Indian, Pacific, and Atlantic oceans. Metropolitan France...
during the Italian Wars
Italian Wars
The Italian Wars, often referred to as the Great Italian Wars or the Great Wars of Italy and sometimes as the Habsburg–Valois Wars, were a series of conflicts from 1494 to 1559 that involved, at various times, most of the city-states of Italy, the Papal States, most of the major states of Western...
.