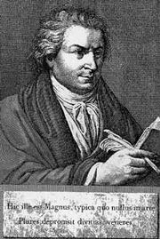 Encyclopedia
Giambattista Bodoni was an Italian
Italy
Italy , officially the Italian Republic languages]] under the European Charter for Regional or Minority Languages. In each of these, Italy's official name is as follows:;;;;;;;;), is a unitary parliamentary republic in South-Central Europe. To the north it borders France, Switzerland, Austria and...
engraver
Engraving
Engraving is the practice of incising a design on to a hard, usually flat surface, by cutting grooves into it. The result may be a decorated object in itself, as when silver, gold, steel, or glass are engraved, or may provide an intaglio printing plate, of copper or another metal, for printing...
, publisher, printer
Printing
Printing is a process for reproducing text and image, typically with ink on paper using a printing press. It is often carried out as a large-scale industrial process, and is an essential part of publishing and transaction printing....
and typographer
Typography
Typography is the art and technique of arranging type in order to make language visible. The arrangement of type involves the selection of typefaces, point size, line length, leading , adjusting the spaces between groups of letters and adjusting the space between pairs of letters...
of high repute remembered for designing a family of different typefaces called Bodoni
Bodoni
-Cold Type versions:As it had been a standard type for many years, Bodoni was widely available in cold type. Alphatype, Autologic, Berthold, Compugraphic, Dymo, Harris, Mergenthaler, MGD Graphic Systems, and Varityper, Hell AG, Monotype, all sold the face under the name ‘’Bodoni, while Graphic...
.


Early years and the Vatican

Bodoni came from a printmaking background, his father and grandfather both being in that trade. He worked for a time as an apprentice in the Vatican
Holy See
The Holy See is the episcopal jurisdiction of the Catholic Church in Rome, in which its Bishop is commonly known as the Pope. It is the preeminent episcopal see of the Catholic Church, forming the central government of the Church. As such, diplomatically, and in other spheres the Holy See acts and...
's Propaganda Fide printing house in Rome
Rome
Rome is the capital of Italy and the country's largest and most populated city and comune, with over 2.7 million residents in . The city is located in the central-western portion of the Italian Peninsula, on the Tiber River within the Lazio region of Italy.Rome's history spans two and a half...
. There, it was said he impressed his superiors so much with his eagerness to learn, studiousness in mastery of ancient languages and types, and energy of effort, that he was allowed to place his own name on his first books, a Coptic
Coptic language
Coptic or Coptic Egyptian is the current stage of the Egyptian language, a northern Afro-Asiatic language spoken in Egypt until at least the 17th century. Egyptian began to be written using the Greek alphabet in the 1st century...
Missal
Missal
A missal is a liturgical book containing all instructions and texts necessary for the celebration of Mass throughout the year.-History:Before the compilation of such books, several books were used when celebrating Mass...
and a version of the Tibetan alphabet. With Baskerville in England and the Didot family in France, Bodoni was a leader in originating pseudoclassical typefaces.

After a battle of malaria put Bodoni out of commission for a while, he was hired by the Duke Ferdinand of Bourbon-Parma to organize a printing house in Parma
Parma
Parma is a city in the Italian region of Emilia-Romagna famous for its ham, its cheese, its architecture and the fine countryside around it. This is the home of the University of Parma, one of the oldest universities in the world....
, to be one of the great houses of Italy, called la Stamperia Reale. Bodoni got to work publicizing the house with the creation of specimen books, which were very well received amongst the upper classes of European capitals. Soon, fine editions of classical and respected works followed, such as Homer's works and Gerusalemme Liberata of Torquato Tasso
Torquato Tasso
Torquato Tasso was an Italian poet of the 16th century, best known for his poem La Gerusalemme liberata , in which he depicts a highly imaginative version of the combats between Christians and Muslims at the end of the First Crusade, during the siege of Jerusalem...
. Eventually his success was such that he was permitted to open a printing house under his own name, Officina Bodoni.

Bodoni achieved an unprecedented level of technical refinement, allowing him to faithfully reproduce letterforms with very thin "hairlines", standing in sharp contrast to the thicker lines constituting the main stems of the characters. He became known for his designs of pseudoclassical typefaces and highly styled editions some considered more apt "to be admired for typeface and layout, not to be studied or read." His printing reflected an aesthetic of plain, unadorned style, combined with purity of materials. This style attracted many admirers and imitators, surpassing the popularity of French typographers such as Philippe Grandjean
Philippe Grandjean
Philippe Grandjean was a French type engraver notable for his series of Roman and italic types known as Romain du Roi , produced in tandem with Louis Simonneau. King Louis XIV, in 1692, directed that a typeface be designed at any necessary expense for the exclusive use of the Royal printer...
and Pierre Simon Fournier
Pierre Simon Fournier
Pierre Simon Fournier was a French mid-18th century punch-cutter, typefounder and typographic theoretician. He was both a collector and originator of types”. Fournier's contributions to printing were his creation of initials and ornaments, his design of letters, and his standardization of type...
.

Unflagged by his famous rivalry with Didot, in his life Bodoni designed and personally engraved 298 typefaces, and the various printing houses he managed produced roughly 1,200 fine editions. After his death at Parma, 1813, his widow published Il Manuale tipografico (The Manual of Typography), presenting 373 characters, 34 Greek and 48 Oriental or exotic ones.William Morris considered Bodoni's mechanical perfection in typography the ultimate example of modern ugliness.
On his chest, when examining his dead body they found the deep scar left by the bar of the printing press.

The Bodoni Museum, named for the artisan, was opened in Parma
Parma
Parma is a city in the Italian region of Emilia-Romagna famous for its ham, its cheese, its architecture and the fine countryside around it. This is the home of the University of Parma, one of the oldest universities in the world....
, Italy in 1963.