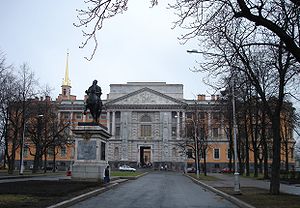 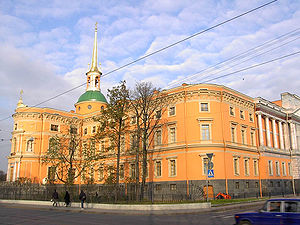 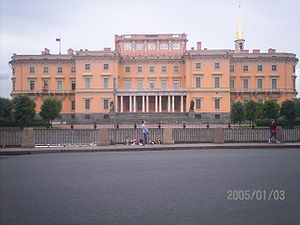 St. Michael's Castle also called the Mikhailovsky Castle or the Engineers Castle , is a former royal residence in the historic centre of Saint Petersburg
Saint Petersburg
Saint Petersburg is a city and a federal subject of Russia located on the Neva River at the head of the Gulf of Finland on the Baltic Sea...
, Russia
Russia
Russia or , officially known as both Russia and the Russian Federation , is a country in northern Eurasia. It is a federal semi-presidential republic, comprising 83 federal subjects...
. St. Michael's Castle was built as a residence for Emperor Paul I
Paul I of Russia
Paul I was the Emperor of Russia between 1796 and 1801. He also was the 72nd Prince and Grand Master of the Order of Malta .-Childhood:...
by architects Vincenzo Brenna
Vincenzo Brenna
Vincenzo Brenna was an Italian architect and painter who was the house architect of Paul I of Russia. Brenna was hired by Paul and his spouse Maria Fyodorovna as interior decorator in 1781 and by the end of 1780s became the couple's leading architect...
and Vasili Bazhenov
Vasili Bazhenov
Vasily Ivanovich Bazhenov was a Russian neoclassical architect, graphic artist, architectural theorist and educator...
in 1797-1801. The castle
Castle
A castle is a type of fortified structure built in Europe and the Middle East during the Middle Ages by European nobility. Scholars debate the scope of the word castle, but usually consider it to be the private fortified residence of a lord or noble...
looks different from each side, as the architects used the motifs of various architectural styles such as French Classicism
French Baroque and Classicism
17th-century French art is generally referred to as Baroque, but from the mid to late 17th century, French art is more often referred to as Neo-classicism, which implies an adherence to certain rules of proportion and sobriety uncharacteristic of the Baroque as it was practiced in Southern and...
, Italian Renaissance
Renaissance architecture
Renaissance architecture is the architecture of the period between the early 15th and early 17th centuries in different regions of Europe, demonstrating a conscious revival and development of certain elements of ancient Greek and Roman thought and material culture. Stylistically, Renaissance...
and Gothic
Gothic architecture
Gothic architecture is a style of architecture that flourished during the high and late medieval period. It evolved from Romanesque architecture and was succeeded by Renaissance architecture....
.

St. Michael's Castle was built to the south of the Summer Garden
Summer Garden
The Summer Garden occupies an island between the Fontanka, Moika, and the Swan Canal in Saint Petersburg and shares its name with the adjacent Summer Palace of Peter the Great.-Original:...
and replaced a small wooden palace of Empress Elizabeth Petrovna. Afraid of intrigues and assassination
Assassination
To carry out an assassination is "to murder by a sudden and/or secret attack, often for political reasons." Alternatively, assassination may be defined as "the act of deliberately killing someone, especially a public figure, usually for hire or for political reasons."An assassination may be...
plots, Emperor Paul I didn't like the Winter Palace
Winter Palace
The Winter Palace in Saint Petersburg, Russia, was, from 1732 to 1917, the official residence of the Russian monarchs. Situated between the Palace Embankment and the Palace Square, adjacent to the site of Peter the Great's original Winter Palace, the present and fourth Winter Palace was built and...
where he never felt safe. Due to his personal interest in Medieval knight
Knight
A knight was a member of a class of lower nobility in the High Middle Ages.By the Late Middle Ages, the rank had become associated with the ideals of chivalry, a code of conduct for the perfect courtly Christian warrior....
s and his constant fear of assassination, the new royal residence was built like a castle
Castle
A castle is a type of fortified structure built in Europe and the Middle East during the Middle Ages by European nobility. Scholars debate the scope of the word castle, but usually consider it to be the private fortified residence of a lord or noble...
with rounded corners in which a small octagonal courtyard is located. The castle was surrounded by the waters of the Moika River
Moika River
The Moyka River is a small river which encircles the central portion of Saint Petersburg, effectively making it an island. The river, originally known as Mya, derives its name from the Ingrian word for "slush, mire"...
, the Fontanka River and two specially dug canals (the Church Canal and the Sunday Canal), transforming the castle area into an artificial island which could only be reached by drawbridge
Drawbridge
A drawbridge is a type of movable bridge typically associated with the entrance of a castle surrounded by a moat. The term is often used to describe all different types of movable bridges, like bascule bridges and lift bridges.-Castle drawbridges:...
s.

Construction began on 26 February (N.S.
Old Style and New Style dates
Old Style and New Style are used in English language historical studies either to indicate that the start of the Julian year has been adjusted to start on 1 January even though documents written at the time use a different start of year ; or to indicate that a date conforms to the Julian...
9 March), 1797 and the castle was solemnly consecrated on 8 November 1800, i.e. on St. Michael's Day
Michael (archangel)
Michael , Micha'el or Mîkhā'ēl; , Mikhaḗl; or Míchaël; , Mīkhā'īl) is an archangel in Jewish, Christian, and Islamic teachings. Roman Catholics, Anglicans, and Lutherans refer to him as Saint Michael the Archangel and also simply as Saint Michael...
according to the Eastern Orthodoxy
Eastern Orthodox Church
The Orthodox Church, officially called the Orthodox Catholic Church and commonly referred to as the Eastern Orthodox Church, is the second largest Christian denomination in the world, with an estimated 300 million adherents mainly in the countries of Belarus, Bulgaria, Cyprus, Georgia, Greece,...
, though works on its internal furnishing proceeded until March 1801. In 1800, the bronze
Bronze sculpture
Bronze is the most popular metal for cast metal sculptures; a cast bronze sculpture is often called simply a "bronze".Common bronze alloys have the unusual and desirable property of expanding slightly just before they set, thus filling the finest details of a mold. Then, as the bronze cools, it...
equestrian Monument to Peter the Great
Monument to Peter I (St. Michael's Castle)
The Monument to Peter I is a bronze equestrian monument of Peter the Great in front of the St. Michael's Castle in Saint Petersburg, Russia....
was erected in front of the castle. The equestrian statue had been designed during Peter the Great's lifetime and later, with the casting completed in 1747 by architect Bartolomeo Rastrelli
Bartolomeo Rastrelli
Francesco Bartolomeo Rastrelli was an Italian architect naturalized Russian. He developed an easily recognizable style of Late Baroque, both sumptuous and majestic...
. By order of Paul I, the inscription "From Great Grandson to Great Grandfather" was made on the pedestal that is decorated with bas-reliefs depicting scenes of two Russian victories over Sweden
Sweden
Sweden , officially the Kingdom of Sweden , is a Nordic country on the Scandinavian Peninsula in Northern Europe. Sweden borders with Norway and Finland and is connected to Denmark by a bridge-tunnel across the Öresund....
during the Great Northern War
Great Northern War
The Great Northern War was a conflict in which a coalition led by the Tsardom of Russia successfully contested the supremacy of the Swedish Empire in northern Central Europe and Eastern Europe. The initial leaders of the anti-Swedish alliance were Peter I the Great of Russia, Frederick IV of...
.

Ironically, Paul I was assassinated only 40 nights after he moved into his newly built castle. He was murdered on 12 March 1801, in his own bedroom, by a group of dismissed officers headed by General Bennigsen
Levin August, Count von Bennigsen
Levin August Gottlieb Theophil , Count von Bennigsen was a German general in the service of the Russian Empire....
. The conspirators forced him to a table, and tried to compel him to sign his abdication
Abdication
Abdication occurs when a monarch, such as a king or emperor, renounces his office.-Terminology:The word abdication comes derives from the Latin abdicatio. meaning to disown or renounce...
. Paul offered some resistance, and one of the assassins struck him with a sword, and he was then strangled and trampled to death. He was succeeded by his son, the Emperor Alexander I
Alexander I of Russia
Alexander I of Russia , served as Emperor of Russia from 23 March 1801 to 1 December 1825 and the first Russian King of Poland from 1815 to 1825. He was also the first Russian Grand Duke of Finland and Lithuania....
, who was actually in the palace, and to whom general Nicholas Zubov, one of the assassins, announced his accession.

After Paul's death, the imperial
Russian Empire
The Russian Empire was a state that existed from 1721 until the Russian Revolution of 1917. It was the successor to the Tsardom of Russia and the predecessor of the Soviet Union...
family returned to the Winter Palace; St. Michael's Castle was abandoned and in 1819 was given to the army
Military history of Imperial Russia
The Military history of the Russian Empire encompasses the history of armed conflict in which the Empire participated. This history stretches from its creation in 1721 by Peter the Great, until the Russian Revolution , which led to the establishment of the Soviet Union...
's Main Engineering School
Military Engineering-Technical University
The Saint Petersburg Military Engineering-Technical University , previously known as the Saint Petersburg Nikolaevsky Engineering Academy, was established in 1810 under Alexander I...
(later to become the Nikolayevskaya Engineering Academy and now Military Engineering-Technical University). Since then the building has been called the Engineer Castle. Between 1838 and 1843, the Russian writer Fyodor Dostoyevsky studied as a cadet at the Main Engineering School.