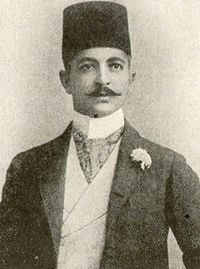 Said Halim Pasha (18 January 1865 - 6 December 1921), Ottoman Empire
Ottoman Empire
The Ottoman EmpireIt was usually referred to as the "Ottoman Empire", the "Turkish Empire", the "Ottoman Caliphate" or more commonly "Turkey" by its contemporaries...
Grand Vizier
Grand Vizier
Grand Vizier, in Turkish Vezir-i Azam or Sadr-ı Azam , deriving from the Arabic word vizier , was the greatest minister of the Sultan, with absolute power of attorney and, in principle, dismissable only by the Sultan himself...
from 1913-17. Born in Cairo, Egypt, he was the grandson of Muhammad Ali of Egypt
Muhammad Ali of Egypt
Muhammad Ali Pasha al-Mas'ud ibn Agha was a commander in the Ottoman army, who became Wāli, and self-declared Khedive of Egypt and Sudan...
, "founder of modern Egypt". The "Pasha" in his name is an honorific that translates in English to "Lord", or "Lord Said Halim".

He was one of the signers in Ottoman-German Alliance
Ottoman-German Alliance
The Ottoman–German Alliance was established between the Ottoman Empire and the German Empire on August 2, 1914. It was this binding alliance that ultimately led the Ottoman Empire to enter the First World War on the side of the Central Powers....
. Yet, he resigned after the incident of the pursuit of Goeben and Breslau
Pursuit of Goeben and Breslau
The pursuit of Goeben and Breslau was a naval action that occurred in the Mediterranean Sea at the outbreak of the First World War when elements of the British Mediterranean Fleet attempted to intercept the German Mittelmeerdivision comprising the battlecruiser and the light cruiser...
, an event which served to cement the Ottoman-German alliance during World War I
World War I
World War I , which was predominantly called the World War or the Great War from its occurrence until 1939, and the First World War or World War I thereafter, was a major war centred in Europe that began on 28 July 1914 and lasted until 11 November 1918...
. It is claimed that Mehmed V
Mehmed V
Mehmed V Reshad was the 35th Ottoman Sultan. He was the son of Sultan Abdülmecid I. He was succeeded by his half-brother Mehmed VI.-Birth:...
wanted a person in whom he trusted as Vizier, and that he asked Said Halim to stay in his post as long as possible. Said Halim's second term lasted until 1917, made short because of continuous clashes between him and the Committee of Union and Progress
Committee of Union and Progress
The Committee of Union and Progress began as a secret society established as the "Committee of Ottoman Union" in 1889 by the medical students İbrahim Temo, Abdullah Cevdet, İshak Sükuti and Ali Hüseyinzade...
, which was the Imperial Government of the Ottoman Empire
Imperial Government of the Ottoman Empire
The Imperial Government of the Ottoman Empire was the government structure added to the Ottoman governing structure during the Second Constitutional Era. The Committee of Union and Progress was in power between 1908 and 1918...
.

During the military trials of World War I in the Ottoman Empire, he was accused of treason as he had his signature under Ottoman-German Alliance. He was exiled on 29 May 1919 to a prison on Malta
Malta
Malta , officially known as the Republic of Malta , is a Southern European country consisting of an archipelago situated in the centre of the Mediterranean, south of Sicily, east of Tunisia and north of Libya, with Gibraltar to the west and Alexandria to the east.Malta covers just over in...
. He was acquitted from the accusations and set free in 1921 at which time he moved to Sicily. He wanted to return to the capital of the Ottoman Empire, Constantinopole (present day Istanbul
Istanbul
Istanbul , historically known as Byzantium and Constantinople , is the largest city of Turkey. Istanbul metropolitan province had 13.26 million people living in it as of December, 2010, which is 18% of Turkey's population and the 3rd largest metropolitan area in Europe after London and...
) in 1921, but this request was rejected. He was assassinated
Operation Nemesis
Operation Nemesis is the Armenian Revolutionary Federation's code-name for a covert operation in early 1920s to assassinate the Turkish planners of the Armenian Genocide. Those involved with the planning and execution of the operation were survivors of the massacres...
soon after by agents of the Armenian Revolutionary Federation
Armenian Revolutionary Federation
The Armenian Revolutionary Federation is an Armenian political party founded in Tiflis in 1890 by Christapor Mikaelian, Stepan Zorian, and Simon Zavarian...
for his role in the Armenian Genocide
Armenian Genocide
The Armenian Genocide—also known as the Armenian Holocaust, the Armenian Massacres and, by Armenians, as the Great Crime—refers to the deliberate and systematic destruction of the Armenian population of the Ottoman Empire during and just after World War I...
.