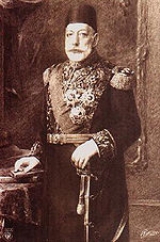 Overview
Mehmed V Reshad (2/3 November 1844 – 3/4 July 1918) was the 35th Ottoman Sultan. He was the son of Sultan Abdülmecid I
Abdülmecid I
Sultan Abdülmecid I, Abdul Mejid I, Abd-ul-Mejid I or Abd Al-Majid I Ghazi was the 31st Sultan of the Ottoman Empire and succeeded his father Mahmud II on July 2, 1839. His reign was notable for the rise of nationalist movements within the empire's territories...
. He was succeeded by his half-brother Mehmed VI
Mehmed VI
Mehmet VI was the 36th and last Sultan of the Ottoman Empire, reigning from 1918 to 1922...
.
He was born at Topkapı Palace
Topkapi Palace
The Topkapı Palace is a large palace in Istanbul, Turkey, that was the primary residence of the Ottoman Sultans for approximately 400 years of their 624-year reign....
, Constantinople. Like many other potential heirs to the throne, he was confined for 30 years in the Harems
Seraglio
A seraglio or serail is the sequestered living quarters used by wives and concubines in a Turkish household. The word comes from an Italian variant of Turkish saray, from Persian sarai , meaning palace, or the enclosed courts for the wives and concubines of the harem of a house or palace...
of the palace. For nine of those years he was in solitary confinement. During this time he studied poetry of the old Persian style and was an acclaimed poet
Poet
A poet is a person who writes poetry. A poet's work can be literal, meaning that his work is derived from a specific event, or metaphorical, meaning that his work can take on many meanings and forms. Poets have existed since antiquity, in nearly all languages, and have produced works that vary...
.

Why is Medhmed V significant to the ottoman empire? What is their "claim to fame?"
More
x