SKF, Svenska Kullagerfabriken AB (Swedish
Swedish language
Swedish is a North Germanic language, spoken by approximately 10 million people, predominantly in Sweden and parts of Finland, especially along its coast and on the Åland islands. It is largely mutually intelligible with Norwegian and Danish...
: Swedish ball bearing
Ball bearing
A ball bearing is a type of rolling-element bearing that uses balls to maintain the separation between the bearing races.The purpose of a ball bearing is to reduce rotational friction and support radial and axial loads. It achieves this by using at least two races to contain the balls and transmit...
factory AB), later AB SKF, is a Swedish
Sweden
Sweden , officially the Kingdom of Sweden , is a Nordic country on the Scandinavian Peninsula in Northern Europe. Sweden borders with Norway and Finland and is connected to Denmark by a bridge-tunnel across the Öresund....
bearing
Rolling-element bearing
A rolling-element bearing, also known as a rolling bearing, is a bearing which carries a load by placing round elements between the two pieces...
company
Company
A company is a form of business organization. It is an association or collection of individual real persons and/or other companies, who each provide some form of capital. This group has a common purpose or focus and an aim of gaining profits. This collection, group or association of persons can be...
founded in 1907, supplying bearings, seals
Seal (mechanical)
A mechanical seal is a device which helps join systems or mechanisms together by preventing leakage , containing pressure, or excluding contamination...
, lubrication and lubrication systems, maintenance products, mechatronics
Mechatronics
Mechatronics is the combination of mechanical engineering, electronic engineering, computer engineering, software engineering, control engineering, and systems design engineering in order to design, and manufacture useful products. Mechatronics is a multidisciplinary field of engineering, that is...
products, power transmission products and related services globally.

The company was founded on Sven Wingqvist's 1907 Swedish patent
Patent
A patent is a form of intellectual property. It consists of a set of exclusive rights granted by a sovereign state to an inventor or their assignee for a limited period of time in exchange for the public disclosure of an invention....
No. 25406, a multi-row self-aligning radial ball bearing
Ball bearing
A ball bearing is a type of rolling-element bearing that uses balls to maintain the separation between the bearing races.The purpose of a ball bearing is to reduce rotational friction and support radial and axial loads. It achieves this by using at least two races to contain the balls and transmit...
. The Patent was granted on 6 June in Sweden coinciding with patents in 10 other countries. The new ball bearing was successful from the outset. By 1910, the company had 325 employees and a subsidiary in the United Kingdom
United Kingdom
The United Kingdom of Great Britain and Northern IrelandIn the United Kingdom and Dependencies, other languages have been officially recognised as legitimate autochthonous languages under the European Charter for Regional or Minority Languages...
. Manufacturing
Manufacturing
Manufacturing is the use of machines, tools and labor to produce goods for use or sale. The term may refer to a range of human activity, from handicraft to high tech, but is most commonly applied to industrial production, in which raw materials are transformed into finished goods on a large scale...
operations were later established in multiple countries.

By 1912, SKF was represented in 32 countries and by 1930, a staff of over 21,000 were employed in 12 manufacturing
Manufacturing
Manufacturing is the use of machines, tools and labor to produce goods for use or sale. The term may refer to a range of human activity, from handicraft to high tech, but is most commonly applied to industrial production, in which raw materials are transformed into finished goods on a large scale...
facilities worldwide with the largest in Philadelphia, Pa.

Assar Gabrielsson
Assar Gabrielsson
Assar Thorvald Nathanael Gabrielsson was a Swedish industrialist and co-founder of Volvo.- Family :He married Anna Theresia Andreasson in 1916...
, SKF sales manager and Björn Prytz
Björn Prytz
Björn Prytz was a Swedish industrialist in the early 1900s and from 1937 to 1947 an envoyé in London for the Swedish government.He was employed 1913 at S.K.F. as marketing manager. He became managing director for S.K.F. around 1921-22. Björn Prytz was the man behind the name Volvo during the time...
, Managing Director of SKF were the founders of Volvo
Volvo
AB Volvo is a Swedish builder of commercial vehicles, including trucks, buses and construction equipment. Volvo also supplies marine and industrial drive systems, aerospace components and financial services...
AB in 1926. In the beginning, the company functioned as a subsidiary automobile company within the SKF group. SKF funded the production run of the first thousand cars, built at Hisingen
Hisingen
Hisingen is the fourth-largest island of Sweden , with an area of , and the most populous, forming part of Gothenburg Municipality, Västra Götaland County. It is bordered by the Göta älv in the south and east, the Nordre älv in the north, and the Kattegat in the west...
in Gothenburg
Gothenburg
Gothenburg is the second-largest city in Sweden and the fifth-largest in the Nordic countries. Situated on the west coast of Sweden, the city proper has a population of 519,399, with 549,839 in the urban area and total of 937,015 inhabitants in the metropolitan area...
, beginning in 1927. SKF used one of the company's trademarked names: AB Volvo, which derives from the Latin "I roll", with its obvious connotations of bearings in motion. The ownership of Volvo lasted until 1935 when the last shares were divested.

In the 1970s SKF embarked on a massive production rationalization program in Europe. A visionary project, "Production Concept for the 80s" was launched with the aim to run the night shifts practically unmanned. To increase productivity and safeguard the product quality, a continuous, automatic flow of bearing rings was needed, so SKF developed the Flexlink
Flexlink
FlexLink, also FlexLink AB, is a manufacturer of flexible, modular conveyors and industrial automation equipment. Headquartered in Göteborg, Sweden, FlexLink has manufacturing, production and engineering facilities in Allentown, PA USA, Poznan, Poland and Kuala Lampur, Malaysia. There are sales...
multiflex plastic chain conveyor system. SKF divested FlexLink as a separate company in 1997. 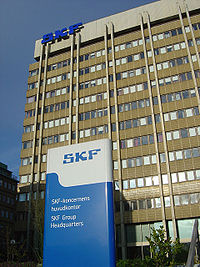 Today, SKF is the largest bearing manufacturer in the world and employs approximately 40,000 people in approximately 100 manufacturing sites that span 70 countries. Turnover
Revenue
In business, revenue is income that a company receives from its normal business activities, usually from the sale of goods and services to customers. In many countries, such as the United Kingdom, revenue is referred to as turnover....
for FY2005 was SEK
Swedish krona
The krona has been the currency of Sweden since 1873. Both the ISO code "SEK" and currency sign "kr" are in common use; the former precedes or follows the value, the latter usually follows it, but especially in the past, it sometimes preceded the value...
49,285 million, and total assets were SEK40,349 million. The SKF Group currently consists of approximately 150 companies including the seal
Seal (mechanical)
A mechanical seal is a device which helps join systems or mechanisms together by preventing leakage , containing pressure, or excluding contamination...
manufacturer Chicago Rawhide. Since its founding, SKF's company headquarters have been located in Gothenburg. One recent acquisition was that of Economos, part of Salzer Holding, an Austria
Austria
Austria , officially the Republic of Austria , is a landlocked country of roughly 8.4 million people in Central Europe. It is bordered by the Czech Republic and Germany to the north, Slovakia and Hungary to the east, Slovenia and Italy to the south, and Switzerland and Liechtenstein to the...
-based seal company, Jaeger Industrial and ABBA, Taiwan
Taiwan
Taiwan , also known, especially in the past, as Formosa , is the largest island of the same-named island group of East Asia in the western Pacific Ocean and located off the southeastern coast of mainland China. The island forms over 99% of the current territory of the Republic of China following...
ese manufacturers of linear actuator
Linear actuator
A linear actuator is an actuator that creates linear motion .Mechanical and hydraulic actuation are the most common methods of achieving the linear motion...
s.

The company's clients include General Electric
General Electric
General Electric Company , or GE, is an American multinational conglomerate corporation incorporated in Schenectady, New York and headquartered in Fairfield, Connecticut, United States...
, Rolls-Royce plc
Rolls-Royce plc
Rolls-Royce Group plc is a global power systems company headquartered in the City of Westminster, London, United Kingdom. It is the world’s second-largest maker of aircraft engines , and also has major businesses in the marine propulsion and energy sectors. Through its defence-related activities...
and Pratt and Whitney. It also supplies bearings for Ferrari
Ferrari
Ferrari S.p.A. is an Italian sports car manufacturer based in Maranello, Italy. Founded by Enzo Ferrari in 1929, as Scuderia Ferrari, the company sponsored drivers and manufactured race cars before moving into production of street-legal vehicles as Ferrari S.p.A. in 1947...
racing
Racing
A sport race is a competition of speed, against an objective criterion, usually a clock or to a specific point. The competitors in a race try to complete a given task in the shortest amount of time...
vehicles, used in Formula One
Formula One
Formula One, also known as Formula 1 or F1 and referred to officially as the FIA Formula One World Championship, is the highest class of single seater auto racing sanctioned by the Fédération Internationale de l'Automobile . The "formula" designation in the name refers to a set of rules with which...
races, and is a sponsor of F1. Another focus area is the energy sector, including wind turbines which generate electricity.

SKF is a member of World Bearing Association (WBA).

SKF runs an own business excellence
Business excellence
Business excellence is the systematic use of quality management principles and tools in business management, with the goal of improving performance based on the principles of customer focus, stakeholder value, and process management...
program for continuous improvement of its business process
Business process
A business process or business method is a collection of related, structured activities or tasks that produce a specific service or product for a particular customer or customers...
es in all parts of the company. The program is based on previous initiatives like TQM
Total Quality Management
Total quality management or TQM is an integrative philosophy of management for continuously improving the quality of products and processes....
and integrates with lean management also statistical methods of Six Sigma
Six Sigma
Six Sigma is a business management strategy originally developed by Motorola, USA in 1986. , it is widely used in many sectors of industry.Six Sigma seeks to improve the quality of process outputs by identifying and removing the causes of defects and minimizing variability in manufacturing and...
along with related project management
Project management
Project management is the discipline of planning, organizing, securing, and managing resources to achieve specific goals. A project is a temporary endeavor with a defined beginning and end , undertaken to meet unique goals and objectives, typically to bring about beneficial change or added value...
. Many elements of this SKF program remind of the integrated approach of the actual EFQM
EFQM
EFQM is a non-profit membership foundation based in Brussels. EFQM is the custodian of the EFQM Excellence Model, a non-prescriptive management framework that is widely used in public & private sector organisations throughout Europe and beyond.EFQM Membership is open to organisations, rather than...
model for Business Excellence.

CEO Tom Johnstone was recognized as the Premier Six Sigma Leader of the year (2006) in Europe by the International Society of Six Sigma Professionals.