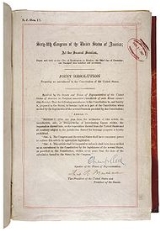 What were some consequences of this amendment?
More

Demand for liquor continued, and the law resulted in the criminalization of producers, suppliers, transporters and consumers. The police, courts and prisons were overwhelmed with new cases; organized crime
Organized crime
Organized crime or criminal organizations are transnational, national, or local groupings of highly centralized enterprises run by criminals for the purpose of engaging in illegal activity, most commonly for monetary profit. Some criminal organizations, such as terrorist organizations, are...
increased in power, and corruption extended among law enforcement officials. The amendment was repealed in 1933 by ratification of the Twenty-first Amendment
Twenty-first Amendment to the United States Constitution
The Twenty-first Amendment to the United States Constitution repealed the Eighteenth Amendment to the United States Constitution, which had mandated nationwide Prohibition...
, the only instance in United States history of repeal of a constitutional amendment.

Many state legislatures had already enacted statewide prohibition prior to the ratification of the Eighteenth Amendment. 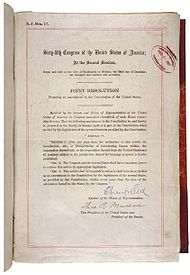 In the House, the vote was 282 to 128, with the Democrats' voting 146 in favor and 64 in opposition; and the Republicans' voting 137 in favor and 62 in opposition. It was officially proposed by the Congress to the states when the Senate passed the resolution, by a vote of 47 to 8, the next day, December 18.

The amendment and its enabling legislation did not ban the consumption of alcohol, but made it difficult to obtain alcoholic beverages legally.

The ratification of the Amendment was completed on January 16, 1919, when Nebraska became the thirty-sixth of the forty-eight states then in the Union to ratify it. On January 29, acting Secretary of State Frank L. Polk certified the ratification.

The following states ratified the amendment:


The following states rejected the amendment: 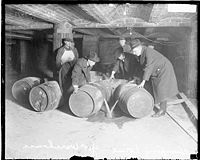 To define the language used in the Amendment, Congress enacted enabling legislation called the National Prohibition Act, better known as the Volstead Act
Volstead Act
The National Prohibition Act, known informally as the Volstead Act, was the enabling legislation for the Eighteenth Amendment which established prohibition in the United States...
, on October 28, 1919. President Woodrow Wilson veto
Veto
A veto, Latin for "I forbid", is the power of an officer of the state to unilaterally stop an official action, especially enactment of a piece of legislation...
ed that bill, but the House of Representatives immediately voted to override the veto and the Senate voted similarly the next day. The Volstead Act set the starting date for nationwide prohibition for January 17, 1920, which was the earliest date allowed by the 18th Amendment.

Following the 18th Amendment's adoption, prohibition effectively resulted in a public demand for illegal alcohol, making criminals of producers and consumers. The criminal justice system was swamped although police forces and courts had expanded in recent years. Prisons were jam-packed and court dockets were behind in trying to deal with the rapid surge in crimes. Organized crime expanded to deal with the lucrative business, and there was widespread corruption among those charged with enforcing unpopular laws.