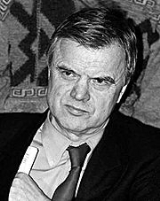 Encyclopedia
Ruslan Imranovich Khasbulatov (born November 22, 1942) is a Russia
Russia
Russia or , officially known as both Russia and the Russian Federation , is a country in northern Eurasia. It is a federal semi-presidential republic, comprising 83 federal subjects...
n economist
Economist
An economist is a professional in the social science discipline of economics. The individual may also study, develop, and apply theories and concepts from economics and write about economic policy...
and politician
Politician
A politician, political leader, or political figure is an individual who is involved in influencing public policy and decision making...
of Chechen
Chechen people
Chechens constitute the largest native ethnic group originating in the North Caucasus region. They refer to themselves as Noxçi . Also known as Sadiks , Gargareans, Malkhs...
descent who played a central role in the events leading to the 1993 constitutional crisis
Russian constitutional crisis of 1993
The constitutional crisis of 1993 was a political stand-off between the Russian president and the Russian parliament that was resolved by using military force. The relations between the president and the parliament had been deteriorating for a while...
in the Russian Federation.

Khasbulatov was born in Tolstoy-yurt, a village near Grozny
Grozny
Grozny is the capital city of the Chechen Republic, Russia. The city lies on the Sunzha River. According to the preliminary results of the 2010 Census, the city had a population of 271,596; up from 210,720 recorded in the 2002 Census. but still only about two-thirds of 399,688 recorded in the 1989...
, the capital of Chechnya
Chechnya
The Chechen Republic , commonly referred to as Chechnya , also spelled Chechnia or Chechenia, sometimes referred to as Ichkeria , is a federal subject of Russia . It is located in the southeastern part of Europe in the Northern Caucasus mountains. The capital of the republic is the city of Grozny...
, on November 22, 1942. Following Stalin
Joseph Stalin
Joseph Vissarionovich Stalin was the Premier of the Soviet Union from 6 May 1941 to 5 March 1953. He was among the Bolshevik revolutionaries who brought about the October Revolution and had held the position of first General Secretary of the Communist Party of the Soviet Union's Central Committee...
's decision to deport the entire Chechen population
Population transfer in the Soviet Union
Population transfer in the Soviet Union may be classified into the following broad categories: deportations of "anti-Soviet" categories of population, often classified as "enemies of workers," deportations of entire nationalities, labor force transfer, and organized migrations in opposite...
on February 23, 1944, Khasbulatov was moved, along with his mother, to the Kazakh SSR
Kazakh SSR
The Kazakh Soviet Socialist Republic , also known as the Kazakh SSR for short, was one of republics that made up the Soviet Union.At in area, it was the second largest constituent republic in the USSR, after the Russian SFSR. Its capital was Alma-Ata . Today it is the independent state of...
; his father, mortally ill, remained behind in hospitalization and soon died.

After studying in the Almaty
Almaty
Almaty , also known by its former names Verny and Alma-Ata , is the former capital of Kazakhstan and the nation's largest city, with a population of 1,348,500...
, Khasbulatov moved to Moscow
Moscow
Moscow is the capital, the most populous city, and the most populous federal subject of Russia. The city is a major political, economic, cultural, scientific, religious, financial, educational, and transportation centre of Russia and the continent...
in 1962, where he studied law at the prestigious Moscow State University
Moscow State University
Lomonosov Moscow State University , previously known as Lomonosov University or MSU , is the largest university in Russia. Founded in 1755, it also claims to be one of the oldest university in Russia and to have the tallest educational building in the world. Its current rector is Viktor Sadovnichiy...
. After graduating in 1966, he joined the Communist Party of the Soviet Union
Communist Party of the Soviet Union
The Communist Party of the Soviet Union was the only legal, ruling political party in the Soviet Union and one of the largest communist organizations in the world...
. He continued his studies, focusing on the political, social and economic development of capitalist countries, and received several higher degrees between 1970 and 1980. During the 1970s and 1980s, he published a number of books on international economics and trade.


Role in the 1993 Constitutional Crisis

While Khasbulatov had been an ally of Yeltsin in this period, the two drifted apart following the collapse of the Soviet Union
Soviet Union
The Soviet Union , officially the Union of Soviet Socialist Republics , was a constitutionally socialist state that existed in Eurasia between 1922 and 1991....
at the end of 1991. After the collapse of the USSR, Khasbulatov consolidated his control over the Russian parliament and became the second most powerful man in Russia after Yeltsin himself. Among other factors, the escalating clash of egos between Khasbulatov and Yeltsin led to the Russian constitutional crisis of 1993
Russian constitutional crisis of 1993
The constitutional crisis of 1993 was a political stand-off between the Russian president and the Russian parliament that was resolved by using military force. The relations between the president and the parliament had been deteriorating for a while...
, in which Khasbulatov (along with former Vice-President Aleksandr Rutskoy) led the Russian Supreme Soviet in its power struggle with the president, which ended with Yeltsin's violent assault on and subsequent dissolution of the parliament in October 1993.

Khasbulatov was arrested along with the other leaders of the parliament. In 1994, the newly elected Duma
State Duma
The State Duma , common abbreviation: Госду́ма ) in the Russian Federation is the lower house of the Federal Assembly of Russia , the upper house being the Federation Council of Russia. The Duma headquarters is located in central Moscow, a few steps from Manege Square. Its members are referred to...
pardoned him along with other key leaders of the anti-Yeltsin resistance.

Following the end of his political career, Khasbulatov returned to his earlier profession as a teacher of economics
Economics
Economics is the social science that analyzes the production, distribution, and consumption of goods and services. The term economics comes from the Ancient Greek from + , hence "rules of the house"...
as founder and head of the Department of International Economy at the Plekhanov Russian Academy of Economics
Plekhanov Russian Academy of Economics
Plekhanov Russian Economic University is a public university located in Moscow, Russia. The university is one of the largest Russian economic institutes of higher education and a member of several international university bodies, such as the European University Association and the European...
(REA). He continues to comment on political developments in Russia.
The source of this article is wikipedia, the free encyclopedia.  The text of this article is licensed under the GFDL.