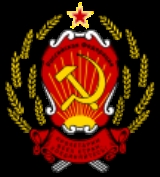 In the 1940s
1940s
File:1940s decade montage.png|Above title bar: events which happened during World War II : From left to right: Troops in an LCVP landing craft approaching "Omaha" Beach on "D-Day"; Adolf Hitler visits Paris, soon after the Battle of France; The Holocaust occurred during the war as Nazi Germany...
, the Supreme Soviet Presidium and the Council of Ministers of the Russian SFSR were located in the former mansion of counts Ostermanov (str Delegatskaya, 3), which was later in 1991 given to a museum. The sessions were held in Grand Kremlin Palace
Grand Kremlin Palace
The Grand Kremlin Palace , also translated Great Kremlin Palace, was built from 1837 to 1849 in Moscow, Russia on the site of the estate of the Grand Princes, which had been established in the 14th century on Borovitsky Hill...
. In 1981 the Supreme Soviet was moved to a specially constructed building on Krasnopresnenskaya embankment, The House of Soviets
White House, Moscow
The White House , also known as the Russian White House, is a government building in Moscow. It stands on Krasnopresnenskaya embankment. Construction started in 1965 and ended in 1981. Originally called The House of Soviets, it was designed by the architects Dmitry Chechulin and P. Shteller...
.

From 1990–1993 the Supreme Soviet consisted of 252 deputies in the two equal chambers—the Soviet of the Republic (Chairman: Ramazan Abdulatipov
Ramazan Abdulatipov
Ramazan Gadzhimuradovich Abdulatipov is a Russian politician of Dagestani heritage and is currently the Ambassador Extraordinary and Plenipotentiary of the Russian Federation to the Republic of Tajikistan.1990–1993 he was Chairman of the Council of Nationalities, a chamber of...
) and the Soviet of Nationalities (Chairman: Veniamin Sokolov). However, the bicameral Supreme Soviet was nominal, because the major decisions were adopted as joint resolution
Joint resolution
In the United States Congress, a joint resolution is a legislative measure that requires approval by the Senate and the House and is presented to the President for his/her approval or disapproval, in exactly the same case as a bill....
s and concurrent resolution
Concurrent resolution
A concurrent resolution is a resolution adopted by both houses of a bicameral legislature that lacks the force of law and does not require the approval of the chief executive.-United States Congress:...
s of all chambers; many of legislative committees were shared between these chambers. The Supreme Soviet of Russia ceased to exist after the events of September–October 1993.