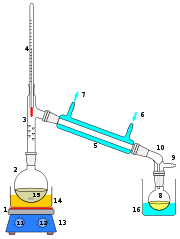 Round-bottom flasks are types of flask
Flask
Flask may refer to:* Laboratory flask, laboratory glassware for holding larger volumes than simple test tubes* Vacuum flask a container designed to keep warm drinks warm and refrigerated drinks cold...
s having spherical bottoms used as laboratory glassware
Laboratory glassware
Laboratory glassware refers to a variety of equipment, traditionally made of glass, used for scientific experiments and other work in science, especially in chemistry and biology laboratories...
, mostly for chemical
Chemistry
Chemistry is the science of matter, especially its chemical reactions, but also its composition, structure and properties. Chemistry is concerned with atoms and their interactions with other atoms, and particularly with the properties of chemical bonds....
or biochemical
Biochemistry
Biochemistry, sometimes called biological chemistry, is the study of chemical processes in living organisms, including, but not limited to, living matter. Biochemistry governs all living organisms and living processes...
work. They are typically made of glass
Glass
Glass is an amorphous solid material. Glasses are typically brittle and optically transparent.The most familiar type of glass, used for centuries in windows and drinking vessels, is soda-lime glass, composed of about 75% silica plus Na2O, CaO, and several minor additives...
for chemical inertness; and in modern days, they are usually made of heat-resistant borosilicate glass. There is at least one tubular section known as the neck with an opening at the tip. Two or three-necked flasks are common as well. Round bottom flasks come in many sizes, from 5 mL to 5 L, with the sizes usually inscribed on the glass. In pilot plants even larger flasks are encountered.

This flask shape is also more resistant to fracturing under vacuum, as a sphere more evenly distributes stress across its surface.

Round-bottom flasks are often used to contain chemical reaction
Chemical reaction
A chemical reaction is a process that leads to the transformation of one set of chemical substances to another. Chemical reactions can be either spontaneous, requiring no input of energy, or non-spontaneous, typically following the input of some type of energy, such as heat, light or electricity...
s run by chemists, especially for reflux
Reflux
Reflux is a technique involving the condensation of vapors and the return of this condensate to the system from which it originated. It is used in industrial and laboratory distillations...
set-ups and laboratory
Laboratory
A laboratory is a facility that provides controlled conditions in which scientific research, experiments, and measurement may be performed. The title of laboratory is also used for certain other facilities where the processes or equipment used are similar to those in scientific laboratories...
-scale synthesis
Chemical synthesis
In chemistry, chemical synthesis is purposeful execution of chemical reactions to get a product, or several products. This happens by physical and chemical manipulations usually involving one or more reactions...
. Boiling chip
Boiling chip
A boiling chip or boiling stone is a small, irregularly shaped piece of material added to liquids to make them boil more smoothly. Boiling chips are frequently employed in distillation and heating. When a liquid becomes superheated, a particle of dust or a stirring rod can cause flash boiling...
s are often added in distilling flasks for distillations or boiling chemical reactions to allow a nucleation site for gradual boiling. This nucleation avoids a sudden boiling surge where the contents may overflow from the boiling flask. Stirring bar
Stir bar
A stir bar is a magnetic bar used to stir a liquid mixture or solution, usually in a laboratory. The stir bar's motion is driven by a separate rotating magnet or assembly of electromagnets located beneath the vessel containing the liquid...
s or other stirring devices suited for round-bottom flasks are sometimes used. Round bottom flasks suffer from poor stirring when compared with Erlenmeyer flask
Erlenmeyer flask
An Erlenmeyer flask, also known as a conical flask, is a widely used type of laboratory flask which features a flat bottom, a conical body, and a cylindrical neck. It is named after the German chemist Emil Erlenmeyer, who created it in 1861...
s, as they can't accept large stir bars and material can become trapped at the base. For a reflux set-up, a condenser
Condenser (laboratory)
In a laboratory a condenser is a piece of laboratory glassware used to cool hot vapors or liquids. A condenser usually consists of a large glass tube containing a smaller glass tube running its entire length, within which the hot fluids pass....
is typically attached to the middle or only neck of the flask being used. Additional necks on a flask could allow a thermometer
Thermometer
Developed during the 16th and 17th centuries, a thermometer is a device that measures temperature or temperature gradient using a variety of different principles. A thermometer has two important elements: the temperature sensor Developed during the 16th and 17th centuries, a thermometer (from the...
or a mechanical stirrer to be inserted into the flask contents. The additional necks can also allow a dropping funnel
Dropping funnel
A dropping funnel is a type of laboratory glassware used to transfer fluids. They are fitted with a stopcock which allows the flow of to be controlled. Dropping funnels are useful for adding reagents slowly, i.e. drop-wise...
to be attached to let reactants slowly drip in.

Special electrically powered heating mantles are available in various sizes into which the bottoms of round-bottom flasks can fit so that the contents of a flask can be heated for distillation, chemical reactions, boiling, etc. Heating can also be accomplished by submerging the bottom of the flask into a heat bath, water bath
Water bath
A water bath can refer to:* A Bain-marie* A heated bath* A Laboratory water bath...
, or sand bath
Sand bath
A sand bath is a common piece of laboratory equipment made from a container filled with heated sand. It is used to provide even heating for another container, most often during a chemical reaction....
. Similarly cooling can be accomplished by partial submerging into a cooling bath
Cooling bath
A cooling bath is a mixture used in a laboratory when low temperatures are needed, for example to conduct low-temperature chemical reactions , to collect highly volatile liquids from distillation, or in cold traps...
, filled with e.g. cold water
Water
Water is a chemical substance with the chemical formula H2O. A water molecule contains one oxygen and two hydrogen atoms connected by covalent bonds. Water is a liquid at ambient conditions, but it often co-exists on Earth with its solid state, ice, and gaseous state . Water also exists in a...
, ice
Ice
Ice is water frozen into the solid state. Usually ice is the phase known as ice Ih, which is the most abundant of the varying solid phases on the Earth's surface. It can appear transparent or opaque bluish-white color, depending on the presence of impurities or air inclusions...
, eutectic ice/salt mixtures, dry ice
Dry ice
Dry ice, sometimes referred to as "Cardice" or as "card ice" , is the solid form of carbon dioxide. It is used primarily as a cooling agent. Its advantages include lower temperature than that of water ice and not leaving any residue...
/solvent mixtures, or liquid nitrogen
Liquid nitrogen
Liquid nitrogen is nitrogen in a liquid state at a very low temperature. It is produced industrially by fractional distillation of liquid air. Liquid nitrogen is a colourless clear liquid with density of 0.807 g/mL at its boiling point and a dielectric constant of 1.4...
.