Encyclopedia
In a chemistry
Chemistry
Chemistry is the science of matter, especially its chemical reactions, but also its composition, structure and properties. Chemistry is concerned with atoms and their interactions with other atoms, and particularly with the properties of chemical bonds....
laboratory, a retort is a glassware device used for distillation
Distillation
Distillation is a method of separating mixtures based on differences in volatilities of components in a boiling liquid mixture. Distillation is a unit operation, or a physical separation process, and not a chemical reaction....
or dry distillation
Dry distillation
Dry distillation is the heating of solid materials to produce gaseous products . The method may or may not involve pyrolysis/thermolysis. The products are condensed and collected. This method usually requires higher temperatures than classical distillation. The method has been used to obtain...
of substances. It consists of a spherical
Sphere
A sphere is a perfectly round geometrical object in three-dimensional space, such as the shape of a round ball. Like a circle in two dimensions, a perfect sphere is completely symmetrical around its center, with all points on the surface lying the same distance r from the center point...
vessel with a long downward-pointing neck. The liquid
Liquid
Liquid is one of the three classical states of matter . Like a gas, a liquid is able to flow and take the shape of a container. Some liquids resist compression, while others can be compressed. Unlike a gas, a liquid does not disperse to fill every space of a container, and maintains a fairly...
to be distilled is placed in the vessel and heated. The neck acts as a condenser
Condensation
Condensation is the change of the physical state of matter from gaseous phase into liquid phase, and is the reverse of vaporization. When the transition happens from the gaseous phase into the solid phase directly, the change is called deposition....
, allowing the evaporated vapors to condense and flow along the neck to a collection vessel placed underneath.

In the chemical industry, a retort is an airtight vessel in which substances are heated for a chemical reaction producing gaseous products to be collected in a collection vessel or for further processing. Such industrial-scale retorts are used in shale oil extraction and the production of charcoal
Charcoal
Charcoal is the dark grey residue consisting of carbon, and any remaining ash, obtained by removing water and other volatile constituents from animal and vegetation substances. Charcoal is usually produced by slow pyrolysis, the heating of wood or other substances in the absence of oxygen...
. A process of heating oil shale
Oil shale
Oil shale, an organic-rich fine-grained sedimentary rock, contains significant amounts of kerogen from which liquid hydrocarbons called shale oil can be produced...
to produce shale oil
Shale oil
Shale oil, known also as kerogen oil or oil-shale oil, is an unconventional oil produced from oil shale by pyrolysis, hydrogenation, or thermal dissolution. These processes convert the organic matter within the rock into synthetic oil and gas...
, shale gas
Shale gas
Shale gas is natural gas produced from shale. Shale gas has become an increasingly important source of natural gas in the United States over the past decade, and interest has spread to potential gas shales in the rest of the world...
, and spent shale is commonly called retorting.

In the food industry, pressure cookers are often referred to as retorts, meaning "canning
Canning
Canning is a method of preserving food in which the food contents are processed and sealed in an airtight container. Canning provides a typical shelf life ranging from one to five years, although under specific circumstances a freeze-dried canned product, such as canned, dried lentils, can last as...
retorts". 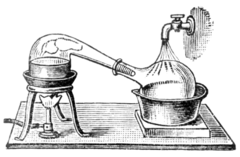 With the invention of the alembic
Alembic
An alembic is an alchemical still consisting of two vessels connected by a tube...
, a kind of retort, the alchemist Jābir ibn Hayyān developed the process of distillation into what it is today. Retorts were widely used by alchemists, and images of retorts appear in many drawings and sketches of their laboratories. Before the advent of modern condensers, retorts were used by many prominent chemists, such as Antoine Lavoisier and Jöns Berzelius.

In laboratory
Laboratory
A laboratory is a facility that provides controlled conditions in which scientific research, experiments, and measurement may be performed. The title of laboratory is also used for certain other facilities where the processes or equipment used are similar to those in scientific laboratories...
use, due to advances in technology, especially the invention of the Liebig condenser, retorts were largely considered to have been rendered obsolete as early as the beginning of the 20th However, some laboratory techniques
Laboratory techniques
Laboratory techniques are the sum of procedures used on natural sciences such as chemistry, biology, physics in order to conduct an experiment, all of them follow scientific method; while some of them involves the use of complex laboratory equipment from laboratory glassware to electrical devices...
that involve simple distillation and do not require sophisticated apparatus may use a retort as a substitute for more complex distillation equipment.
The source of this article is wikipedia, the free encyclopedia.  The text of this article is licensed under the GFDL.