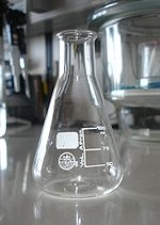 The Erlenmeyer is usually marked on the side (graduated) to indicate the approximate volume of contents, and has a spot of ground glass
Ground glass
Ground glass is glass whose surface has been ground to produce a flat but rough finish.Ground glass surfaces have many applications, ranging from mere ornamentation on windows and table glassware to scientific uses in optics and laboratory glassware....
or enamel where it can be labeled with a pencil
Pencil
A pencil is a writing implement or art medium usually constructed of a narrow, solid pigment core inside a protective casing. The case prevents the core from breaking, and also from marking the user’s hand during use....
. It differs from the beaker
Beaker (glassware)
A beaker is a simple container for stirring, mixing and heating liquids commonly used in many laboratories. Beakers are generally cylindrical in shape, with a flat bottom. Most also have a small spout to aid pouring as shown in the picture...
in its tapered body and narrow neck.

The opening usually has a slight rounded lip so that the Erlenmeyer can be easily stoppered using a piece of cotton wool, rubber bung or similar. Alternatively, the neck may be fitted with a female
Gender of connectors and fasteners
In electrical and mechanical trades and manufacturing, each half of a pair of mating connectors or fasteners is conventionally assigned the designation male or female...
ground glass joint to accept a glass stopper. The conical shape allows the contents to be swirled or stirred during an experiment, either by hand or by a shaker; the narrow neck keeps the contents from spilling out. The small neck reduces evaporative losses compared to a beaker, while the flat bottom of the conical flask makes it unlikely to tip over and spill.

Erlenmeyers are used in chemistry labs for titration
Titration
Titration, also known as titrimetry, is a common laboratory method of quantitative chemical analysis that is used to determine the unknown concentration of an identified analyte. Because volume measurements play a key role in titration, it is also known as volumetric analysis. A reagent, called the...
, e.g. for pH
PH
In chemistry, pH is a measure of the acidity or basicity of an aqueous solution. Pure water is said to be neutral, with a pH close to 7.0 at . Solutions with a pH less than 7 are said to be acidic and solutions with a pH greater than 7 are basic or alkaline...
, as they can be held and the contents mixed single-handed leaving the other hand free to add reagent
Reagent
A reagent is a "substance or compound that is added to a system in order to bring about a chemical reaction, or added to see if a reaction occurs." Although the terms reactant and reagent are often used interchangeably, a reactant is less specifically a "substance that is consumed in the course of...
.

Erlenmeyer flasks are suitable for heating liquids, e.g. with a Bunsen burner
Bunsen burner
A Bunsen burner, named after Robert Bunsen, is a common piece of laboratory equipment that produces a single open gas flame, which is used for heating, sterilization, and combustion.- Operation:...
. The flask is usually placed on a ring held to a ring stand by means of a ring clamp. A wire gauze
Gauze
Gauze is a thin, translucent fabric with a loose open weave.-Uses and types:Gauze was originally made of silk and was used for clothing. It is now used for many different things, including gauze sponges for medical purposes. When used as a medical dressing, gauze is generally made of cotton...
mesh or pad is usually placed between the ring and the flask to prevent the flames from directly touching the glass in the same manner as for a beaker. When heating (or cooling) in a water bath the flask can be clamped by the neck to a stand or a hooped weight may be placed over the conical part of the flask to prevent it from floating in the bath.

Erlenmeyers are also used in microbiology
Microbiology
Microbiology is the study of microorganisms, which are defined as any microscopic organism that comprises either a single cell , cell clusters or no cell at all . This includes eukaryotes, such as fungi and protists, and prokaryotes...
for the preparation of microbial cultures. Plastic Erlenmeyer flasks used in cell culture are pre-sterilized and feature closures and vented closures to enhance gas exchange during incubation and shaking.
The source of this article is wikipedia, the free encyclopedia.  The text of this article is licensed under the GFDL.