Encyclopedia
Rory O'Connor was an Irish republican activist. He is best remembered for his role in the Irish Civil War
Irish Civil War
The Irish Civil War was a conflict that accompanied the establishment of the Irish Free State as an entity independent from the United Kingdom within the British Empire....
1922-1923, which led to his execution.

O'Connor was born in Dublin in 1883 and in his youth he worked as a railway engineer in Canada
Canada
Canada is a North American country consisting of ten provinces and three territories. Located in the northern part of the continent, it extends from the Atlantic Ocean in the east to the Pacific Ocean in the west, and northward into the Arctic Ocean...
.

After his return to Ireland, he became involved in Irish nationalist politics, joined the Ancient Order of Hibernians
Ancient Order of Hibernians
The Ancient Order of Hibernians is an Irish Catholic fraternal organization. Members must be Catholic and either Irish born or of Irish descent. Its largest membership is now in the United States, where it was founded in New York City in 1836...
and was interned
Internment
Internment is the imprisonment or confinement of people, commonly in large groups, without trial. The Oxford English Dictionary gives the meaning as: "The action of 'interning'; confinement within the limits of a country or place." Most modern usage is about individuals, and there is a distinction...
after the Easter Rising
Easter Rising
The Easter Rising was an insurrection staged in Ireland during Easter Week, 1916. The Rising was mounted by Irish republicans with the aims of ending British rule in Ireland and establishing the Irish Republic at a time when the British Empire was heavily engaged in the First World War...
in 1916.


The War of Independence 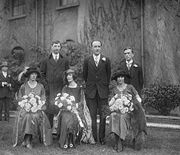 He did not accept the Anglo-Irish Treaty
Anglo-Irish Treaty
The Anglo-Irish Treaty , officially called the Articles of Agreement for a Treaty Between Great Britain and Ireland, was a treaty between the Government of the United Kingdom of Great Britain and Ireland and representatives of the secessionist Irish Republic that concluded the Irish War of...
of 1921, which established the Irish Free State
Irish Free State
The Irish Free State was the state established as a Dominion on 6 December 1922 under the Anglo-Irish Treaty, signed by the British government and Irish representatives exactly twelve months beforehand...
, but which abolished the Irish Republic
Irish Republic
The Irish Republic was a revolutionary state that declared its independence from Great Britain in January 1919. It established a legislature , a government , a court system and a police force...
declared in 1916 and 1919, which O'Connor and his comrades had sworn to uphold. On 26 March 1922, the anti-treaty officers of the IRA held a convention in Dublin, in which they rejected the Treaty compromise and repudiated the authority of the Dáil, the elected Irish Parliament. Asked by a journalist if this meant they were proposing a military dictatorship in Ireland, O'Connor replied, "you can take it that way if you want".

On 14 April 1922 O'Connor, with 200 other hardline anti-treaty IRA men under his command, took over the Four Courts
Four Courts
The Four Courts in Dublin is the Republic of Ireland's main courts building. The Four Courts are the location of the Supreme Court, the High Court and the Dublin Circuit Court. The building until 2010 also formerly was the location for the Central Criminal Court.-Gandon's Building:Work based on...
building in the centre of Dublin in defiance of the Provisional Government
Provisional Government of Southern Ireland
The provisional Government of Southern Ireland was the provisional government for the administration of Southern Ireland between 16 January 1922 and 6 December 1922. The government was effectively a transitional administration for the period between the ratifying of the Anglo-Irish Treaty and the...
. They wanted to provoke the British troops (whom were still in the country) into attacking them, which they thought would re-start the war with Britain, and re-unite the IRA against their common enemy. They also occupied other smaller buildings thought to be associated with the former British administration, such as the Ballast Office and the Freemasons' Hall in Molesworth Street
Molesworth Street, Dublin
Molesworth Street links the more notable Dawson Street with Kildare Street. Both houses of the Oireachtas are located in Leinster House, Kildare Street ....
, but the Four Courts remained the focus of interest.

In the following months Michael Collins
Michael Collins (Irish leader)
Michael "Mick" Collins was an Irish revolutionary leader, Minister for Finance and Teachta Dála for Cork South in the First Dáil of 1919, Director of Intelligence for the IRA, and member of the Irish delegation during the Anglo-Irish Treaty negotiations. Subsequently, he was both Chairman of the...
tried desperately to persuade O'Connor and his men to leave the building before fighting broke out. In June 1922, after the Four Courts garrison had kidnapped JJ O'Connell, a general in the new Free State Army, Collins shelled the Four Courts with borrowed British artillery. O'Connor surrendered after two days of fighting and was arrested and held in Mountjoy Prison
Mountjoy Prison
Mountjoy Prison , founded as Mountjoy Gaol, nicknamed The Joy, is a medium security prison located in Phibsboro in the centre of Dublin, Ireland. It has the largest prison population in Ireland.The current prison governor is Mr...
. This incident sparked the Irish Civil War
Irish Civil War
The Irish Civil War was a conflict that accompanied the establishment of the Irish Free State as an entity independent from the United Kingdom within the British Empire....
- as fighting broke out around the country between pro and anti treaty factions.

On the 8th of December 1922, along with three other republicans (Liam Mellows
Liam Mellows
Liam Mellows was an Irish Republican and Sinn Féin politician. Born in England, Mellows grew up in County Wexford in Ireland. He was active with the Irish Republican Brotherhood and Irish Volunteers, and participated in the Easter Rising in County Galway, and the War of Independence...
, Richard Barrett
Richard Barrett (Irish Republican)
Richard Barrett was a prominent Irish Republican Army volunteer who was executed during the Irish Civil War in 1922.-War of Independence:...
and Joe McKelvey
Joe McKelvey
Joe McKelvey was an Irish Republican Army officer who was executed during the Irish Civil War. He participated in the anti-Treaty IRA's repudiation of the authority of the Dáil in March 1922 and was elected to the IRA Army Executive...
) captured with the fall of the Four Courts, Rory O'Connor was executed by firing squad
Executions during the Irish Civil War
The executions during the Irish Civil War took place during the guerrilla phase of the Irish Civil War . This phase of the war was bitter, and both sides, the government forces of the Irish Free State and the anti-Treaty Irish Republican Army insurgents, used executions and terror in what...
in reprisal for the anti-treaty IRA's killing of Free State member of parliament Sean Hales
Sean Hales
Sean Hales was an Irish political activist in the early 20th century. Hales was born in Ballinadee, County Cork, where he and his brothers Tom, Donal and Robert were involved in the Irish Republican Army during the Irish War of Independence.At the 1921 elections Hales was elected to the Second...
. The execution order was signed by Kevin O'Higgins
Kevin O'Higgins
Kevin Christopher O'Higgins was an Irish politician who served as Vice-President of the Executive Council and Minister for Justice. He was part of early nationalist Sinn Féin, before going on to become a prominent member of Cumann na nGaedheal. O'Higgins initiated the An Garda Síochána police force...
, who less than a year earlier had appointed O'Connor to be best man at his wedding, symbolising the bitterness and division which the Civil War had caused. O'Connor, along with the other 76 executed republicans, was subsequently seen as a martyr by the Republican Movement in Ireland.

"Rory O'Connor Place" in Arklow
Arklow
Arklow , also known as Inbhear Dé from the Avonmore river's older name Abhainn Dé, is a historic town located in County Wicklow on the east coast of Ireland. Founded by the Vikings in the ninth century, Arklow was the site of one of the bloodiest battles of the 1798 rebellion...
is named in his honour. There is also a pub in Crumlin, Dublin
Crumlin, Dublin
Crumlin is suburb in Southside Dublin, Ireland. It is the site of Ireland's largest hospital for children.-Location:Crumlin covers the area from the River Poddle near the KCR to the Drimnagh Road, to Bunting Road, and is situated not far from the city centre, on the Southside of Dublin city....
named after him, and a residential road in Deansgrange, Dún Laoghaire (County Dublin) called "Rory O'Connor Park".