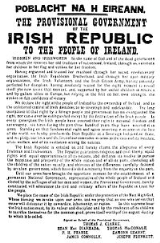 Overview
The Easter Rising was an insurrection
Rebellion
Rebellion, uprising or insurrection, is a refusal of obedience or order. It may, therefore, be seen as encompassing a range of behaviors aimed at destroying or replacing an established authority such as a government or a head of state...
staged in Ireland
Ireland
Ireland is an island to the northwest of continental Europe. It is the third-largest island in Europe and the twentieth-largest island on Earth...
during Easter Week
Easter Week
Easter Week is the period of seven days from Easter Sunday through the Saturday following.-Western Church:In the Latin Rite of Roman Catholicism, Anglican and other Western churches, Easter Week is the week beginning with the Christian feast of Easter and ending a week later on Easter Saturday...
, 1916. The Rising was mounted by Irish republicans
Irish Republicanism
Irish republicanism is an ideology based on the belief that all of Ireland should be an independent republic.In 1801, under the Act of Union, the Kingdom of Great Britain and the Kingdom of Ireland merged to form the United Kingdom of Great Britain and Ireland...
with the aims of ending British rule
United Kingdom of Great Britain and Ireland
The United Kingdom of Great Britain and Ireland was the formal name of the United Kingdom during the period when what is now the Republic of Ireland formed a part of it....
in Ireland and establishing the Irish Republic
Irish Republic
The Irish Republic was a revolutionary state that declared its independence from Great Britain in January 1919. It established a legislature , a government , a court system and a police force...
at a time when the British Empire was heavily engaged in the First World War. It was the most significant uprising in Ireland since the rebellion of 1798
Irish Rebellion of 1798
The Irish Rebellion of 1798 , also known as the United Irishmen Rebellion , was an uprising in 1798, lasting several months, against British rule in Ireland...
.

How did the Easter Rising effect the political ties between Ireland and England?
More

Did the easter rising speed up the independence or would it have occured anyway?
More
x