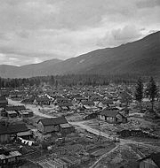 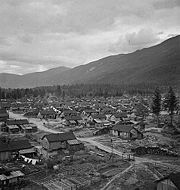 Internment is the imprisonment or confinement of people, commonly in large groups, without trial. The Oxford English Dictionary
Oxford English Dictionary
The Oxford English Dictionary , published by the Oxford University Press, is the self-styled premier dictionary of the English language. Two fully bound print editions of the OED have been published under its current name, in 1928 and 1989. The first edition was published in twelve volumes , and...
(1989) gives the meaning as: "The action of 'interning'; confinement within the limits of a country or place." Most modern usage is about individuals, and there is a distinction between internment, which is being confined usually for preventive or political reasons, and imprisonment, which is being closely confined as a punishment for crime.

Internment also refers to the practice of neutral countries
Neutral country
A neutral power in a particular war is a sovereign state which declares itself to be neutral towards the belligerents. A non-belligerent state does not need to be neutral. The rights and duties of a neutral power are defined in Sections 5 and 13 of the Hague Convention of 1907...
in time of war in detaining belligerent armed forces and equipment in their territories under the Second Hague Convention.

Early civilizations such as Assyria
Assyria
Assyria was a Semitic Akkadian kingdom, extant as a nation state from the mid–23rd century BC to 608 BC centred on the Upper Tigris river, in northern Mesopotamia , that came to rule regional empires a number of times through history. It was named for its original capital, the ancient city of Assur...
used forced resettlement of populations as a means of controlling territory, but it was not until much later in the late 19th and 20th centuries that records exist of groups of civilian non-combatants being concentrated into large prison camps.

The Universal Declaration of Human Rights
Universal Declaration of Human Rights
The Universal Declaration of Human Rights is a declaration adopted by the United Nations General Assembly . The Declaration arose directly from the experience of the Second World War and represents the first global expression of rights to which all human beings are inherently entitled...
restricts the use of internment. Article 9 states that "No one shall be subjected to arbitrary arrest
Arbitrary arrest and detention
Arbitrary arrest and arbitrary detention are the arrest or detention of an individual in a case in which there is no likelihood or evidence that they committed a crime against legal statute, or in which there has been no proper due process of law...
, detention
Detention (imprisonment)
Detention is the process when a state, government or citizen lawfully holds a person by removing their freedom of liberty at that time. This can be due to criminal charges being raised against the individual as part of a prosecution or to protect a person or property...
or exile."

An internment camp is a large detention
Detention (imprisonment)
Detention is the process when a state, government or citizen lawfully holds a person by removing their freedom of liberty at that time. This can be due to criminal charges being raised against the individual as part of a prosecution or to protect a person or property...
center created for political opponents, enemy aliens, people with mental illness
Mental illness
A mental disorder or mental illness is a psychological or behavioral pattern generally associated with subjective distress or disability that occurs in an individual, and which is not a part of normal development or culture. Such a disorder may consist of a combination of affective, behavioural,...
, members of specific ethnic or religious groups, civilian inhabitants of a critical war-zone, or other groups of people, usually during a war. The term is used for facilities where the inmates were selected by some generalized criteria, rather than detained as individuals after due process of law fairly applied by a judiciary
Judiciary
The judiciary is the system of courts that interprets and applies the law in the name of the state. The judiciary also provides a mechanism for the resolution of disputes...
.

The Random House Dictionary defines the term "concentration camp" as: "a guarded compound for the detention or imprisonment of aliens, members of ethnic minorities, political opponents, etc.", and, the American Heritage Dictionary defines it as: "A camp where civilians, enemy aliens, political prisoners, and sometimes prisoners of war are detained and confined, typically under harsh conditions."


Earliest usage of concentration camps and origins of the term

Polish historian Władysław Konopczyński has suggested the first concentration camps were created in Poland
Poland
Poland , officially the Republic of Poland , is a country in Central Europe bordered by Germany to the west; the Czech Republic and Slovakia to the south; Ukraine, Belarus and Lithuania to the east; and the Baltic Sea and Kaliningrad Oblast, a Russian exclave, to the north...
in the 18th century, during the Bar Confederation
Bar Confederation
The Bar Confederation was an association of Polish nobles formed at the fortress of Bar in Podolia in 1768 to defend the internal and external independence of the Polish–Lithuanian Commonwealth against Russian influence and against King Stanisław August Poniatowski and Polish reformers who were...
rebellion, when the Russian Empire
Russian Empire
The Russian Empire was a state that existed from 1721 until the Russian Revolution of 1917. It was the successor to the Tsardom of Russia and the predecessor of the Soviet Union...
established three concentration camps for Polish rebel captives awaiting deportation to Siberia
Siberia
Siberia is an extensive region constituting almost all of Northern Asia. Comprising the central and eastern portion of the Russian Federation, it was part of the Soviet Union from its beginning, as its predecessor states, the Tsardom of Russia and the Russian Empire, conquered it during the 16th...
.

The English
English language
English is a West Germanic language that arose in the Anglo-Saxon kingdoms of England and spread into what was to become south-east Scotland under the influence of the Anglian medieval kingdom of Northumbria...
term "concentration camp" grew in prominence during the Second Boer War
Second Boer War
The Second Boer War was fought from 11 October 1899 until 31 May 1902 between the British Empire and the Afrikaans-speaking Dutch settlers of two independent Boer republics, the South African Republic and the Orange Free State...
(1899–1902), when they were operated by the British in South Africa.

There were a total of 45 tented camps built for Boer internees and 64 for black Africans. Of the 28,000 Boer men captured as prisoners of war, 25,630 were sent overseas. The vast majority of Boers remaining in the local camps were women and children. 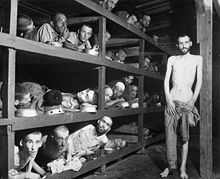 However, even Nazi concentration camps were not necessarily death camps. For example, some camps were sources of slave labor
Slavery
Slavery is a system under which people are treated as property to be bought and sold, and are forced to work. Slaves can be held against their will from the time of their capture, purchase or birth, and deprived of the right to leave, to refuse to work, or to demand compensation...
: the inmates were exploited rather than killed, although many were worked to death or killed for refusing to work.

Because of these negative connotations, the term "concentration camp", originally itself a euphemism, has been replaced by newer euphemisms such as internment camp, resettlement camp, and detention facility, regardless of the actual circumstances of these camps, which vary a great deal.