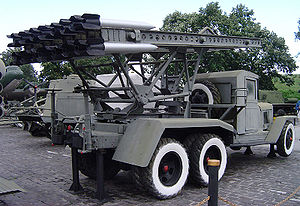 A rocket is a self propelled, unguided weapon
Weapon
A weapon, arm, or armament is a tool or instrument used with the aim of causing damage or harm to living beings or artificial structures or systems...
system powered by a rocket
Rocket
A rocket is a missile, spacecraft, aircraft or other vehicle which obtains thrust from a rocket engine. In all rockets, the exhaust is formed entirely from propellants carried within the rocket before use. Rocket engines work by action and reaction...
motor.

In military parlance, powered munitions are broadly categorised as follows:


However, the distinction can become somewhat blurred, especially where a weapon begins as an unguided rocket and is then fitted with a guidance system - e.g. the GMLRS system is still referred to as rocket artillery, despite employing guided munitions.

The use of rockets as some form of artillery
Artillery
Originally applied to any group of infantry primarily armed with projectile weapons, artillery has over time become limited in meaning to refer only to those engines of war that operate by projection of munitions far beyond the range of effect of personal weapons...
dates back to medieval China
China
Chinese civilization may refer to:* China for more general discussion of the country.* Chinese culture* Greater China, the transnational community of ethnic Chinese.* History of China* Sinosphere, the area historically affected by Chinese culture...
where devices such as fire arrows were used (albeit mostly as a psychological weapon), and gradually spread to Europe
Europe
Europe is, by convention, one of the world's seven continents. Comprising the westernmost peninsula of Eurasia, Europe is generally 'divided' from Asia to its east by the watershed divides of the Ural and Caucasus Mountains, the Ural River, the Caspian and Black Seas, and the waterways connecting...
and the Middle East
Middle East
The Middle East is a region that encompasses Western Asia and Northern Africa. It is often used as a synonym for Near East, in opposition to Far East...
. Rockets became a significant weapon during the 20th Century, when precise manufacturing processes made relatively accurate rockets possible. 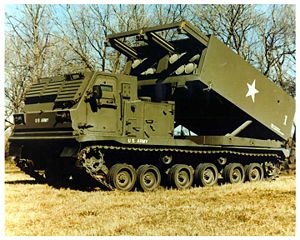 Rockets are widely used as an artillery weapon, due to their simplicity and the ability of a launch platform to fire mulitple rockets in a very short space of time - unlike gun
Gun
A gun is a muzzle or breech-loaded projectile-firing weapon. There are various definitions depending on the nation and branch of service. A "gun" may be distinguished from other firearms in being a crew-served weapon such as a howitzer or mortar, as opposed to a small arm like a rifle or pistol,...
based artillery, which typically carries a single, heavy barrel and must be reloaded for each shot, multiple rocket lauchers can typically fire their entire ammunition supply in a matter of seconds. This rate of fire is very useful as it allows little time for the target to take cover or get away, and allows the artillery unit to shoot-and-scoot
Shoot-and-scoot
The term shoot and scoot refers to an artillery tactic of firing at a target and then immediately moving away from the location where the shots were fired. The reason for this is to avoid counter-battery fire - fired by enemy artillery or delivered by attack aircraft and helicopters, in order to...
, avoiding enemy counter-battery fire
Counter-battery fire
Counter-battery fire is a type of mission assigned to military artillery forces, which are given the task of locating and firing upon enemy artillery.-Background:...
.

With the invention of the tank
Tank
A tank is a tracked, armoured fighting vehicle designed for front-line combat which combines operational mobility, tactical offensive, and defensive capabilities...
, the infantry
Infantry
Infantrymen are soldiers who are specifically trained for the role of fighting on foot to engage the enemy face to face and have historically borne the brunt of the casualties of combat in wars. As the oldest branch of combat arms, they are the backbone of armies...
required a weapon to counter the threat. Tank armour
Armour
Armour or armor is protective covering used to prevent damage from being inflicted to an object, individual or a vehicle through use of direct contact weapons or projectiles, usually during combat, or from damage caused by a potentially dangerous environment or action...
soon developed beyond the point at which an anti-tank rifle
Anti-tank rifle
An anti-tank rifle is a rifle designed to penetrate the armour of vehicles, particularly tanks. The usefulness of rifles for this purpose ran from the introduction of tanks in World War I and until the Korean War...
could practically be carried by an infantryman, and by the Second World War rocket weapons such as the US Bazooka
Bazooka
Bazooka is the common name for a man-portable recoilless rocket antitank weapon, widely fielded by the U.S. Army. Also referred to as the "Stovepipe", the innovative bazooka was amongst the first-generation of rocket propelled anti-tank weapons used in infantry combat...
and German
Germans
The Germans are a Germanic ethnic group native to Central Europe. The English term Germans has referred to the German-speaking population of the Holy Roman Empire since the Late Middle Ages....
Panzerschreck
Panzerschreck
Panzerschreck was the popular name for the Raketenpanzerbüchse , an 88 mm calibre reusable anti-tank rocket launcher developed by Nazi Germany in World War II. Another popular nickname was Ofenrohr ....
were in service. Development continued after the war, with weapons such as the RPG-7
RPG-7
The RPG-7 is a widely-produced, portable, unguided, shoulder-launched, anti-tank rocket-propelled grenade launcher. Originally the RPG-7 and its predecessor, the RPG-2, were designed by the Soviet Union, and now manufactured by the Bazalt company...
, although a need to increase range lead to the development of guided weapons to fulfill the anti-tank role.

The use of anti-tank weapons to attack buildings and other targets has led to the development of weapons and ammunition
Ammunition
Ammunition is a generic term derived from the French language la munition which embraced all material used for war , but which in time came to refer specifically to gunpowder and artillery. The collective term for all types of ammunition is munitions...
designed specifically to attack non-tank targets, such as the one-shot LASM
M72 LAW
The M72 LAW is a portable one-shot 66 mm unguided anti-tank weapon, designed in the United States by Paul V. Choate, Charles B. Weeks, and Frank A. Spinale et al...
and the larger SMAW
Shoulder-Launched Multipurpose Assault Weapon
The Shoulder-Launched Multipurpose Assault Weapon is a shoulder-launched rocket weapon, based on the Israeli B-300, with the primary function of being a portable assault weapon and a secondary anti-armor rocket launcher. It was introduced to the United States armed forces in 1984...
. 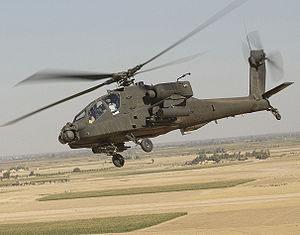 Unguided rockets have been launched from aircraft
Aircraft
An aircraft is a vehicle that is able to fly by gaining support from the air, or, in general, the atmosphere of a planet. An aircraft counters the force of gravity by using either static lift or by using the dynamic lift of an airfoil, or in a few cases the downward thrust from jet engines.Although...
since the early 20th century, to attack land, sea and air targets. Even after the development of guided missiles, rockets remain useful for short-range attacks - typically for close air support
Close air support
In military tactics, close air support is defined as air action by fixed or rotary winged aircraft against hostile targets that are close to friendly forces, and which requires detailed integration of each air mission with fire and movement of these forces.The determining factor for CAS is...
missions.
The source of this article is wikipedia, the free encyclopedia.  The text of this article is licensed under the GFDL.