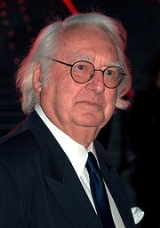 For the American urban planner, see Richard L. Meier
Richard L. Meier
Richard Louis Meier, is an US regional planner, systems theorist, scientist, urban scholar, and futurist, who was Professor in the College of Environmental Design at University of California at Berkeley. He was an early thinker on sustainability in planning, and recognized as a leading figure in...


Richard Meier (born October 12, 1934) is an American
United States
The United States of America is a federal constitutional republic comprising fifty states and a federal district...
architect
Architect
An architect is a person trained in the planning, design and oversight of the construction of buildings. To practice architecture means to offer or render services in connection with the design and construction of a building, or group of buildings and the space within the site surrounding the...
, whose rationalist
Rationalism (architecture)
The intellectual principles of rationalism are based on architectural theory. Vitruvius had already established in his work De Architectura that architecture is a science that can be comprehended rationally. This formulation was taken up and further developed in the architectural treatises of the...
buildings make prominent use of the color white.

Meier is Jewish and was born in Newark, New Jersey
Newark, New Jersey
Newark is the largest city in the American state of New Jersey, and the seat of Essex County. As of the 2010 United States Census, Newark had a population of 277,140, maintaining its status as the largest municipality in New Jersey. It is the 68th largest city in the U.S...
. He earned a Bachelor of Architecture
Bachelor of Architecture
The Bachelor of Architecture is an undergraduate academic degree designed to satisfy the academic component of professional accreditation bodies, to be followed by a period of practical training prior to professional examination and registration. It is awarded for a course of study that lasts up...
degree from Cornell University
Cornell University
Cornell University is an Ivy League university located in Ithaca, New York, United States. It is a private land-grant university, receiving annual funding from the State of New York for certain educational missions...
in 1957, worked for Skidmore, Owings and Merrill
Skidmore, Owings and Merrill
Skidmore, Owings and Merrill LLP is an American architectural and engineering firm that was formed in Chicago in 1936 by Louis Skidmore and Nathaniel Owings; in 1939 they were joined by John O. Merrill. They opened their first branch in New York City, New York in 1937. SOM is one of the largest...
briefly in 1959, and then for Marcel Breuer
Marcel Breuer
Marcel Lajos Breuer , was a Hungarian-born modernist, architect and furniture designer of Jewish descent. One of the masters of Modernism, Breuer displayed interest in modular construction and simple forms.- Life and work :Known to his friends and associates as Lajkó, Breuer studied and taught at...
for three years, prior to starting his own practice in New York
New York
New York is a state in the Northeastern region of the United States. It is the nation's third most populous state. New York is bordered by New Jersey and Pennsylvania to the south, and by Connecticut, Massachusetts and Vermont to the east...
in 1963. Identified as one of The New York Five
The New York Five
The New York Five refers to a group of five New York City architects whose work appeared in a Museum of Modern Art exhibition organized by Arthur Drexler in 1967, and the subsequent book Five Architects in 1972.These five had a common allegiance to a pure form of architectural modernism, harkening...
in 1972, his commission of the Getty Center
Getty Center
The Getty Center, in Brentwood, Los Angeles, California, is a campus for cultural institutions founded by oilman J. Paul Getty. The $1.3 billion center, which opened on December 16, 1997, is also well known for its architecture, gardens, and views overlooking Los Angeles...
in Los Angeles
Los Ángeles
Los Ángeles is the capital of the province of Biobío, in the commune of the same name, in Region VIII , in the center-south of Chile. It is located between the Laja and Biobío rivers. The population is 123,445 inhabitants...
, California catapulted his popularity into the mainstream. Richard Meier & Partners Architects has offices in New York and Los Angeles with current projects ranging from China and Tel Aviv to Paris and Hamburg.

Much of Meier's work builds on the work of architects of the early to mid-20th century, especially that of Le Corbusier
Le Corbusier
Charles-Édouard Jeanneret, better known as Le Corbusier , was a Swiss-born French architect, designer, urbanist, writer and painter, famous for being one of the pioneers of what now is called modern architecture. He was born in Switzerland and became a French citizen in 1930...
and, in particular, Le Corbusier's early phase. Meier has built more using Corbusier's ideas than anyone, including Le Corbusier himself. Meier expanded many ideas evident in Le Corbusier's work, particularly the Villa Savoye
Villa Savoye
Villa Savoye is a modernist villa in Poissy, in the outskirts of Paris, France. It was designed by Swiss architects Le Corbusier and his cousin, Pierre Jeanneret, and built between 1928 and 1931....
and the Swiss Pavilion.

His work also reflects the influences of other designers such as Mies Van der Rohe
Ludwig Mies van der Rohe
Ludwig Mies van der Rohe was a German architect. He is commonly referred to and addressed as Mies, his surname....
and, in some instances, Frank Lloyd Wright
Frank Lloyd Wright
Frank Lloyd Wright was an American architect, interior designer, writer and educator, who designed more than 1,000 structures and completed 500 works. Wright believed in designing structures which were in harmony with humanity and its environment, a philosophy he called organic architecture...
and Luis Barragán
Luis Barragán
Luis Barragán Morfin was a Mexican architect. He was self-trained.-Early life:Educated as an engineer, he graduated from the Escuela Libre de Ingenieros in Guadalajara in 1923 and was self-trained as an architect.After graduation, he travelled through Spain, France , and...
(without the colour). White has been used in many architectural landmark buildings throughout history, including cathedrals and the white-washed villages of the Mediterranean region, in Spain, southern Italy and Greece.

In 1984, Meier was awarded the Pritzker Prize
Pritzker Prize
The Pritzker Architecture Prize is awarded annually by the Hyatt Foundation to honour "a living architect whose built work demonstrates a combination of those qualities of talent, vision and commitment, which has produced consistent and significant contributions to humanity and the built...
. In 2008, he won the gold medal in architecture from the Academy of Arts and Letters and his work Jesolo Lido Village was awarded the Dedalo Minosse International Prize for commissioning a building
Dedalo Minosse Prize
The Dedalo Minosse International Prize for commissioning a building is promoted by ALA-Assoarchitetti, Italian association for professional Architects....
. Meier is a Senior Fellow of the Design Futures Council
Design Futures Council
The Design Futures Council is an interdisciplinary network of design, product, and construction leaders exploring global trends, challenges, and opportunities to advance innovation and shape the future of the industry and environment...
.

The Mayor of Rome Gianni Alemanno included in his campaign platform a promise to tear down the big travertine wall of Meier's Ara Pacis
Ara Pacis
The Ara Pacis Augustae is an altar to Peace, envisioned as a Roman goddess...
. Mayor Alemmano has since changed his stance on the building and has agreed with Mr. Meier to modifications including drastically reducing the height of the wall between an open-air space outside the museum and a busy road along the Tiber river. The city plans to build a wide pedestrian area along the river and run the road underneath it. "It's an improvement," says Meier, adding that "the reason that wall was there has to do with traffic and noise. Once that is eliminated, the idea of opening the piazza to the river is a good one." The mayor’s office said Alemanno hopes to complete the project before the end of his term in 2013. 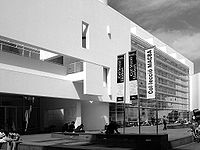