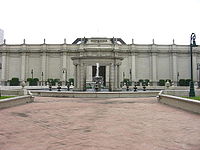 Reforma is a Mexican
Mexico
The United Mexican States , commonly known as Mexico , is a federal constitutional republic in North America. It is bordered on the north by the United States; on the south and west by the Pacific Ocean; on the southeast by Guatemala, Belize, and the Caribbean Sea; and on the east by the Gulf of...
newspaper based in Mexico City
Mexico City
Mexico City is the Federal District , capital of Mexico and seat of the federal powers of the Mexican Union. It is a federal entity within Mexico which is not part of any one of the 31 Mexican states but belongs to the federation as a whole...
. It has 276,700 readers in Mexico City. The paper shares content with other papers in parent newsgroup Grupo Reforma
Grupo Reforma
Grupo Reforma is the largest printed media company in Mexico and Latin America. It publishes ten daily newspapers in five cities, including the leading newspapers in Mexico's three largest cities: Reforma in Mexico City, El Norte in Monterrey and Mural in Guadalajara...
. The cumulative readership of the newsgroup is above 400,000. Reforma is named after the Mexico City avenue of the same name, Paseo de la Reforma
Paseo de la Reforma
Paseo de la Reforma is a wide avenue that runs in a straight line, cutting diagonally across Mexico City. It was designed by Ferdinand von Rosenzweig in the 1860s and modeled after the great boulevards of Europe, such as Vienna's Ringstrasse or the Champs-Élysées in Paris...
, which is in turn named after "La Reforma
La Reforma
La Reforma was a period halfway through the 19th century in the history of Mexico that was characterized by liberal reforms and the transformation of Mexico into a nation state...
": a series of liberal reforms undertaken by the country in the mid 19th century.

The newspaper emphasizes its design
Graphic design
Graphic design is a creative process – most often involving a client and a designer and usually completed in conjunction with producers of form – undertaken in order to convey a specific message to a targeted audience...
, variety of columnists, and editorials that denounce political corruption. Reforma, along with the other newspapers of its parent, have an interest in color printing.

Reforma was founded in 1993, as an offshoot of El Norte, the noted Monterrey
Monterrey
Monterrey , is the capital city of the northeastern state of Nuevo León in the country of Mexico. The city is anchor to the third-largest metropolitan area in Mexico and is ranked as the ninth-largest city in the nation. Monterrey serves as a commercial center in the north of the country and is the...
-based daily. Reforma was the first newsgroup in Mexico to separate its commercial division from its journalism division. This allowed for a greater independence in journalism, and helps journalists resist the temptation of writing favorable notes on sponsors.

When it was founded, on November 20, the newspaper pressured unionized newsstands to sell the paper on that day. Since November 20 is the Mexican Revolution
Mexican Revolution
The Mexican Revolution was a major armed struggle that started in 1910, with an uprising led by Francisco I. Madero against longtime autocrat Porfirio Díaz. The Revolution was characterized by several socialist, liberal, anarchist, populist, and agrarianist movements. Over time the Revolution...
day, an obligatory public holiday in México, the unions refused, and so Reforma had to be sold on the streets by journalists and celebrities, as a protest against what they considered "a boycott".

Reforma changed the traditional distribution of newspapers because of its independence from the unionized newsstands and printed media resellers. It also was innovative because of the inclusion of people of all political opinions in its editorial pages.

The newsgroup is 85 years old. It all started with the founding of El Sol in April 1922, followed by El Norte in 1938, Monterrey's Metro in 1988, Reforma in 1993, Palabra and Mexico City's Metro in 1997, Mural in 1998, Saltillo
Saltillo
Saltillo is the capital city of the northeastern Mexican state of Coahuila and the municipal seat of the municipality of the same name. The city is located about 400 km south of the U.S. state of Texas, and 90 km west of Monterrey, Nuevo León....
's Metro in 2004 and Guadalajara
Guadalajara
Guadalajara may refer to:In Mexico:*Guadalajara, Jalisco, the capital of the state of Jalisco and second largest city in Mexico**Guadalajara Metropolitan Area*University of Guadalajara, a public university in Guadalajara, Jalisco...
's Metro in 2005.

Grupo Refoma's independent journalism drew the ire of the powerful Mexico City's carrier union barely a year after it was born. This syndicate controls distribution of all newspapers in the capital city and was traditionally used by the political system to bring down any paper that was deemed unacceptable. The carried union boycotted the distribution of Reforma in Mexico City in October 1994. Grupo Reforma decided to create and independent distribution channel to sell Reforma in Mexico City's streets. The support of the readers was incredible: intellectuals, artists and regular folks joined Reforma's personnel in the process to create this channel. Dozens of people went to the streets to sell the paper, withstandin the verbal and even physical violence of the carrier union. Currently, Reforma is distributed independently to the homes of 85,000 subscribers, to supermarkets and other retail outlets and to readers in Mexico City's streets. The paper's daily circulation averages 200,000 coopies.

Grupo Reforma's dailies have an open journalism model that is very different from any newspaper in the world. One of the cornerstones of this model are the editorial boards. Each section of all of the papers has an editorial board, which is a group of readers and leaders in the section's area of interest that get together weekly or bi-monthly to set the section's editorial agenda. For example, the editorial board of Reforma's national section may include a diputado (member of house of representatives), a senator, several politicians, some members of NGO's, as well as normal readers, like housewives, students, etc...

The boards have complete liberty of action in setting what the paper is covering. The board is led by each section's editor, so the board members are working with the person who is directly responsible for the daily operation of the section.

Each board session is divided in two parts. In the first one, the board members criticize the content of the session since the last time they met. What was done right? What needs to be corrected? What was plainly wrong? These and other similar topics are dealt with in this first discussion.

During the next step in the session, the discussion centers on the work ahead. What stories should the section be working on? Who should the paper be interviewing? Are there any events that are worth covering? It is in this part of the meeting where the editorial agenda is defined by the group.

Each year, 850 people are part of the 70 editorial boards that define the editorial agenda for all of Grupo Reforma's papers. More than 8 thousand people have been members of an editorial board during the 15 years that they have been in operation. Participation is voluntary, so no payment is given out to the board members. The "payment" they receive is to see how they indeed are setting the agenda for some of the most influential newspapers in Mexico and thus collaborating to transform the country. The boards are renewed every year, but a couple of the members are chosen by the same board to stay on, so there is some continuity with any work in progress that was left behind. Every quarter, the editor gives his/her board a balance of all the suggestions they've provided and how they have been implemented in the section.

Despite its avowed independent editorial style, Reforma has been labeled as a right-wing newspaper in references by The Guardian
The Guardian
The Guardian, formerly known as The Manchester Guardian , is a British national daily newspaper in the Berliner format...
, Clarin
Clarín (newspaper)
Clarín is the largest newspaper in Argentina, published by the Grupo Clarín media group. It was founded by Roberto Noble on 28 August 1945. It is politically centrist but popularly understood to oppose the Kirchner government...
, the San Antonio Express-News
San Antonio Express-News
The San Antonio Express-News is the daily newspaper of San Antonio, Texas. It is ranked as the third-largest daily newspaper in the state of Texas in terms of circulation, and is one of the leading news sources of South Texas, with offices in Austin, Brownsville, Laredo, and Mexico City...
, the University of Miami school of communication
University of Miami
The University of Miami is a private, non-sectarian university founded in 1925 with its main campus in Coral Gables, Florida, a medical campus in Miami city proper at Civic Center, and an oceanographic research facility on Virginia Key., the university currently enrolls 15,629 students in 12...
, and the The Princeton Progressive Nation
Princeton University
Princeton University is a private research university located in Princeton, New Jersey, United States. The school is one of the eight universities of the Ivy League, and is one of the nine Colonial Colleges founded before the American Revolution....
. Former presidential candidate Andres Manuel López Obrador
Andrés Manuel López Obrador
Andrés Manuel López Obrador , also known as AMLO or El Peje, is a Mexican politician who held the position of Head of Government of the Federal District from 2000 to 2005, before resigning in July 2005 to contend the 2006 presidential election, representing the unsuccessful Coalition for the Good...
has also accused the paper of this bias, and even denounced the paper of being a "press bulletin for the PAN". However, the paper itself has columnists who openly support Andrés Manuel López Obrador, such as Guadalupe Loaeza, Lorenzo Meyer, and Miguel Ángel Granados Chapa.

Another alleged bias of the newspaper is to be in favor of privatizing the Electrical Utilities (CFE,LyF). After the Enron collapse, this bias has diminished.