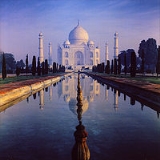 A reflecting pool or reflection pool is a water feature found in gardens, parks, and at memorial sites. It usually consists of a shallow pool of water
Water
Water is a chemical substance with the chemical formula H2O. A water molecule contains one oxygen and two hydrogen atoms connected by covalent bonds. Water is a liquid at ambient conditions, but it often co-exists on Earth with its solid state, ice, and gaseous state . Water also exists in a...
, undisturbed by fountain jets, for a calm reflective surface.

Reflecting pools are often designed with the outer basin floor at the rim slightly deeper than the central area to suppress wave formation. They can be as small as a bird bath, to as large as a major civic element. Their origins are from ancient Persian gardens
Persian Gardens
The tradition and style in the garden design of Persian gardens has influenced the design of gardens from Andalusia to India and beyond. The gardens of the Alhambra show the influence of Persian Garden philosophy and style in a Moorish Palace scale from the era of Al-Andalus in Spain...
.