The memorial was formally dedicated on April 19, 2000: the fifth anniversary of the bombing. The museum was dedicated and opened the following year on February 19.

Months after the attack, Mayor Ron Norick appointed a task force to look into a creation of a permanent memorial where the Murrah building once stood. The Task Force called for 'a symbolic outdoor memorial', a Memorial Museum, and for creation of Oklahoma City National Memorial Institute for the Prevention of Terrorism. Six hundred and twenty four designs were submitted for the memorial and on July 1997 a design by Butzer Design Partnership, which consists of the husband and wife, Hans and Torrey Butzer was chosen.

On October 1997, President Bill Clinton
Bill Clinton
William Jefferson "Bill" Clinton is an American politician who served as the 42nd President of the United States from 1993 to 2001. Inaugurated at age 46, he was the third-youngest president. He took office at the end of the Cold War, and was the first president of the baby boomer generation...
signed law creating the Oklahoma City National Memorial as a unit of the National Park Service
National Park Service
The National Park Service is the U.S. federal agency that manages all national parks, many national monuments, and other conservation and historical properties with various title designations...
to be operated by the Oklahoma City National Memorial Trust. The total cost of the memorial was $29.1 Million; $10 Million for the Outdoor Symbolic Memorial, $7 Million for the Memorial Museum, $5 Million for the Memorial Institute for the Prevention of Terrorism and the rest for other costs. The Federal Government appropriated $5 Million for construction with the State of Oklahoma matching that amount. More than $17 Million of private donations were raised.

The Outdoor Symbolic Memorial consists of the following segments on 3.3 acre
Acre
The acre is a unit of area in a number of different systems, including the imperial and U.S. customary systems. The most commonly used acres today are the international acre and, in the United States, the survey acre. The most common use of the acre is to measure tracts of land.The acre is related...
s (13,000 m2); it can be visited 24 hours a day, 365 days a year.


The outside of each gate bears this inscription:

The force of the blast ripped most of the branches from the Survivor Tree, glass and debris were embedded in its trunk and fire from the cars parked beneath it blackened what was left. Most thought the tree could not survive. Almost a year after the bombing, family members, survivors and rescue workers gathered for a memorial ceremony by the tree noticed it was beginning to bloom again. The Survivor Tree now thrives, as the Outdoor Memorial design included a mandate to feature and protect the tree. For example, one of the roots that would have been cut by the wall surrounding the tree was placed inside a large pipe, so it could reach the soil beyond the wall without being damaged. The decking around the tree was raised several feet to make an underground crawlspace; workers enter through a secure hatchway and monitor the health of the tree and maintain its very deep roots.

The inscription around the inside of the deck wall around the Survivor Tree reads:


Hundreds of seeds from the Survivor Tree are planted annually and the resulting saplings are distributed each year on the anniversary of the bombing. Thousands of Survivor Trees are growing in public and private places all over the United States. 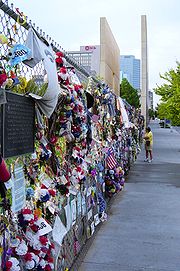