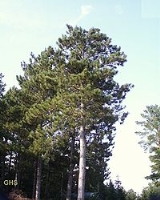 Encyclopedia
Pinus resinosa, commonly known as the red pine or Norway pine,http://www.dnr.state.mn.us/snapshots/plants/redpine.html is pine
Pine
Pines are trees in the genus Pinus ,in the family Pinaceae. They make up the monotypic subfamily Pinoideae. There are about 115 species of pine, although different authorities accept between 105 and 125 species.-Etymology:...
native to North America
North America
North America is a continent wholly within the Northern Hemisphere and almost wholly within the Western Hemisphere. It is also considered a northern subcontinent of the Americas...
. The Red Pine occurs from Newfoundland west to Manitoba
Manitoba
Manitoba is a Canadian prairie province with an area of . The province has over 110,000 lakes and has a largely continental climate because of its flat topography. Agriculture, mostly concentrated in the fertile southern and western parts of the province, is vital to the province's economy; other...
, and south to Pennsylvania
Pennsylvania
The Commonwealth of Pennsylvania is a U.S. state that is located in the Northeastern and Mid-Atlantic regions of the United States. The state borders Delaware and Maryland to the south, West Virginia to the southwest, Ohio to the west, New York and Ontario, Canada, to the north, and New Jersey to...
, with several smaller, disjunct populations occurring in the Appalachian Mountains
Appalachian Mountains
The Appalachian Mountains #Whether the stressed vowel is or ,#Whether the "ch" is pronounced as a fricative or an affricate , and#Whether the final vowel is the monophthong or the diphthong .), often called the Appalachians, are a system of mountains in eastern North America. The Appalachians...
in Virginia
Virginia
The Commonwealth of Virginia , is a U.S. state on the Atlantic Coast of the Southern United States. Virginia is nicknamed the "Old Dominion" and sometimes the "Mother of Presidents" after the eight U.S. presidents born there...
and West Virginia
West Virginia
West Virginia is a state in the Appalachian and Southeastern regions of the United States, bordered by Virginia to the southeast, Kentucky to the southwest, Ohio to the northwest, Pennsylvania to the northeast and Maryland to the east...
, as well as a few small pockets in extreme northern New Jersey
New Jersey
New Jersey is a state in the Northeastern and Middle Atlantic regions of the United States. , its population was 8,791,894. It is bordered on the north and east by the state of New York, on the southeast and south by the Atlantic Ocean, on the west by Pennsylvania and on the southwest by Delaware...
and one in north central Illinois
Illinois
Illinois is the fifth-most populous state of the United States of America, and is often noted for being a microcosm of the entire country. With Chicago in the northeast, small industrial cities and great agricultural productivity in central and northern Illinois, and natural resources like coal,...
.

Red Pine is an evergreen tree characterized by tall, straight growth in a variety of habitats. It usually ranges from 20–35 m (65-115 ft) in height and 1 m (3 ft) in trunk diameter, exceptionally reaching 43 m (141 ft) tall (Gymnosperm Database). The crown is conical, becoming a narrow rounded dome with age. The bark
Bark
Bark is the outermost layers of stems and roots of woody plants. Plants with bark include trees, woody vines and shrubs. Bark refers to all the tissues outside of the vascular cambium and is a nontechnical term. It overlays the wood and consists of the inner bark and the outer bark. The inner...
is thick and gray-brown at the base of the tree, but thin, flaky and bright orange-red in the upper crown; the tree's name derives from this distinctive character. Some red color may be seen in the fissures of the bark. Red Pine is self pruning; there tend not to be dead branches on the trees, and older trees may have very long lengths of branchless trunk below the canopy.

The leaves
Leaf
A leaf is an organ of a vascular plant, as defined in botanical terms, and in particular in plant morphology. Foliage is a mass noun that refers to leaves as a feature of plants....
are needle-like, dark green, in fascicles of two, 12–18 cm (4.7-7 in) long, and brittle. The leaves snap cleanly when bent; this character, stated as diagnostic for Red Pine in some texts, is however shared by several other pine species. The cones
Conifer cone
A cone is an organ on plants in the division Pinophyta that contains the reproductive structures. The familiar woody cone is the female cone, which produces seeds. The male cones, which produce pollen, are usually herbaceous and much less conspicuous even at full maturity...
are symmetrical ovoid, 4–6 cm (1.5-2.4 in) long, 2.5 cm (1 in) broad and purple before maturity, ripening nut-blue and opening to 4–5 cm (1.5-2 in) broad, the scales without a prickle and almost stakeless.

The species is notable for its very constant morphology and low genetic variation throughout its range, suggesting it has been through a near extinction in its recent evolution
Evolution
Evolution is any change across successive generations in the heritable characteristics of biological populations. Evolutionary processes give rise to diversity at every level of biological organisation, including species, individual organisms and molecules such as DNA and proteins.Life on Earth...
ary history

This species is intolerant of shade, but does well in windy sites; it grows best in well-drained soil. It is a long-lived tree, reaching a maximum age of about 500 years. The wood
Wood
Wood is a hard, fibrous tissue found in many trees. It has been used for hundreds of thousands of years for both fuel and as a construction material. It is an organic material, a natural composite of cellulose fibers embedded in a matrix of lignin which resists compression...
is commercially valuable in forestry
Forestry
Forestry is the interdisciplinary profession embracing the science, art, and craft of creating, managing, using, and conserving forests and associated resources in a sustainable manner to meet desired goals, needs, and values for human benefit. Forestry is practiced in plantations and natural stands...
for timber
Timber
Timber may refer to:* Timber, a term common in the United Kingdom and Australia for wood materials * Timber, Oregon, an unincorporated community in the U.S...
and paper pulp
Paper
Paper is a thin material mainly used for writing upon, printing upon, drawing or for packaging. It is produced by pressing together moist fibers, typically cellulose pulp derived from wood, rags or grasses, and drying them into flexible sheets....
, and the tree is also used for landscaping.

The Red Pine is the state tree of Minnesota
Minnesota
Minnesota is a U.S. state located in the Midwestern United States. The twelfth largest state of the U.S., it is the twenty-first most populous, with 5.3 million residents. Minnesota was carved out of the eastern half of the Minnesota Territory and admitted to the Union as the thirty-second state...
.http://www.sos.state.mn.us/index.aspx?page=169