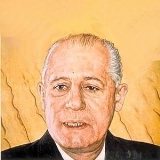 Encyclopedia
Raoul Albin Louis Salan (ʁaul salɑ̃; 10 June 1899 - 3 July 1984) was a French Army
French Army
The French Army, officially the Armée de Terre , is the land-based and largest component of the French Armed Forces.As of 2010, the army employs 123,100 regulars, 18,350 part-time reservists and 7,700 Legionnaires. All soldiers are professionals, following the suspension of conscription, voted in...
general and the fourth French
France
The French Republic , The French Republic , The French Republic , (commonly known as France , is a unitary semi-presidential republic in Western Europe with several overseas territories and islands located on other continents and in the Indian, Pacific, and Atlantic oceans. Metropolitan France...
commanding general
General
A general officer is an officer of high military rank, usually in the army, and in some nations, the air force. The term is widely used by many nations of the world, and when a country uses a different term, there is an equivalent title given....
during the First Indochina War
First Indochina War
The First Indochina War was fought in French Indochina from December 19, 1946, until August 1, 1954, between the French Union's French Far East...
. Salan was one of four generals who organized the 1961 Algiers Putsch operation and then founded the Organisation de l'armée secrète.

Salan was born in Roquecourbe
Roquecourbe
Roquecourbe is a commune in the Tarn department in southern France....
, Tarn. After the Second World War, he became commander of French forces in Tonkin
Tonkin
Tonkin , also spelled Tongkin, Tonquin or Tongking, is the northernmost part of Vietnam, south of China's Yunnan and Guangxi Provinces, east of northern Laos, and west of the Gulf of Tonkin. Locally, it is known as Bắc Kỳ, meaning "Northern Region"...
and signed agreements regarding the disposition of French troops within Vietnam. By 1948, he was commander of all French land forces in East Asia; after the death of Jean de Lattre de Tassigny
Jean de Lattre de Tassigny
Jean Joseph Marie Gabriel de Lattre de Tassigny, GCB, MC was a French military hero of World War II and commander in the First Indochina War.-Early life:...
in 1952, Salan became the commander-in-chief in Indochina. Although he was probably the most experienced officer in Indochina, the new government led up by René Mayer
René Mayer
René Mayer was a French Radical politician of the Fourth Republic who served briefly as Prime Minister during 1953. He led the Mayer Authority from 1955 to 1958.-Mayer's Ministry, 8 January – 28 June 1953:*René Mayer – President of the Council...
wanted a new policy in Indochina and replaced him in January 1953 with Henri Navarre
Henri Navarre
Henri Eugène Navarre was a French Army general. He fought during World War I, World War II and was the seventh commander of French Far East Expeditionary Corps during the First Indochina War...
, who was previously in charge in the intelligence service, not on field operations.

On 16 January 1957, while commander of the 10th military area and interarmy commander in Algiers
Algiers
' is the capital and largest city of Algeria. According to the 1998 census, the population of the city proper was 1,519,570 and that of the urban agglomeration was 2,135,630. In 2009, the population was about 3,500,000...
, Salan was the target of an assassination
Assassination
To carry out an assassination is "to murder by a sudden and/or secret attack, often for political reasons." Alternatively, assassination may be defined as "the act of deliberately killing someone, especially a public figure, usually for hire or for political reasons."An assassination may be...
attempt using a bazooka
Bazooka
Bazooka is the common name for a man-portable recoilless rocket antitank weapon, widely fielded by the U.S. Army. Also referred to as the "Stovepipe", the innovative bazooka was amongst the first-generation of rocket propelled anti-tank weapons used in infantry combat...
, resulting in the death of a French major
Major
Major is a rank of commissioned officer, with corresponding ranks existing in almost every military in the world.When used unhyphenated, in conjunction with no other indicator of rank, the term refers to the rank just senior to that of an Army captain and just below the rank of lieutenant colonel. ...
. Salan was warned minutes before the attempt by his military Attaché, Michel Houet; (21 March 1926). The attackers were French residents of Algiers who wanted to replace Salan with General René Cogny
René Cogny
René Cogny was a French Général de division, World War II and French Resistance veteran and survivor of Buchenwald and Mauthausen-Gusen concentration camps. He was a commander of the French forces in Tonkin during the First Indochina War, and notably during the Battle of Dien Bien Phu...
, whom they saw as a more energetic leader. The group's leader blamed the influence of a group of six prominent French politicians, which included future French Prime Minister Michel Debré
Michel Debré
Michel Jean-Pierre Debré was a French Gaullist politician. He is considered the "father" of the current Constitution of France, and was the first Prime Minister of the Fifth Republic...
(a senator at the time of the incident), as inspiration for the assassination attempt. However, he did not present any evidence to support the claim, and an investigation did not produce any definite answers about their involvement in the attack.

Salan was charged with treason and condemned in absentia
In absentia
In absentia is Latin for "in the absence". In legal use, it usually means a trial at which the defendant is not physically present. The phrase is not ordinarily a mere observation, but suggests recognition of violation to a defendant's right to be present in court proceedings in a criminal trial.In...
to death. Then, in April 1962, he was arrested in Algiers. The death sentence on him was commuted to life imprisonment. A July 1968 act granted him and others amnesty; a November 1982 law reintegrated the surviving generals into the Army and Salan with seven others benefitted from this law.