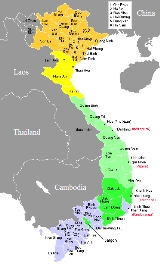 Tonkin also spelled Tongkin, Tonquin or Tongking, is the northernmost part of Vietnam
Vietnam
Vietnam – sometimes spelled Viet Nam , officially the Socialist Republic of Vietnam – is the easternmost country on the Indochina Peninsula in Southeast Asia. It is bordered by China to the north, Laos to the northwest, Cambodia to the southwest, and the South China Sea –...
, south of China
China
Chinese civilization may refer to:* China for more general discussion of the country.* Chinese culture* Greater China, the transnational community of ethnic Chinese.* History of China* Sinosphere, the area historically affected by Chinese culture...
's Yunnan
Yunnan
Yunnan is a province of the People's Republic of China, located in the far southwest of the country spanning approximately and with a population of 45.7 million . The capital of the province is Kunming. The province borders Burma, Laos, and Vietnam.Yunnan is situated in a mountainous area, with...
and Guangxi
Guangxi
Guangxi, formerly romanized Kwangsi, is a province of southern China along its border with Vietnam. In 1958, it became the Guangxi Zhuang Autonomous Region of the People's Republic of China, a region with special privileges created specifically for the Zhuang people.Guangxi's location, in...
Provinces, east of northern Laos
Laos
Laos Lao: ສາທາລະນະລັດ ປະຊາທິປະໄຕ ປະຊາຊົນລາວ Sathalanalat Paxathipatai Paxaxon Lao, officially the Lao People's Democratic Republic, is a landlocked country in Southeast Asia, bordered by Burma and China to the northwest, Vietnam to the east, Cambodia to the south and Thailand to the west...
, and west of the Gulf of Tonkin
Gulf of Tonkin
The Gulf of Tonkin is an arm of the South China Sea, lying off the coast of northeastern Vietnam.-Etymology:The name Tonkin, written "東京" in Hán tự and Đông Kinh in romanised Vietnamese, means "Eastern Capital", and is the former toponym for Hanoi, the capital of Vietnam...
. Locally, it is known as Bắc Kỳ, meaning "Northern Region". Located on the fertile delta
Red River Delta
The Red River Delta is the flat plain formed by the Red River and its distributaries joining in the Thai Binh River in northern Vietnam. The delta measuring some 15,000 square km is well protected by a network of dikes. It is an agriculturally rich area and densely populated...
of the Red River
Red River (Vietnam)
The Red River , also known as the Sông Cái - Mother River , or Yuan River , is a river that flows from southwest China through northern Vietnam to the Gulf of Tonkin...
, Tonkin is rich in rice
Rice
Rice is the seed of the monocot plants Oryza sativa or Oryza glaberrima . As a cereal grain, it is the most important staple food for a large part of the world's human population, especially in East Asia, Southeast Asia, South Asia, the Middle East, and the West Indies...
production.

The area was called Văn Lang
Van Lang
Văn Lang was, according to tradition, the first nation of the ancient Vietnamese people, founded in 2879 BC and existing until 258 BC. It was ruled by the Hùng Kings of the Hồng Bàng Dynasty. There is, however, little reliable historical information available...
by Vietnamese ancestors at around 2000-100 BCE. Evidence of the earliest established society other than the Đông Sơn culture in Northern Vietnam was found in Cổ Loa
Co Loa Citadel
Cổ Loa Citadel is a citadel built near Phong Khe, about 20km to the North of today’s Hanoi, during the end of the Hồng Bàng Dynasty . The fortress is a spiral-shaped complex of the then new capital...
, the ancient city situated near present-day Hà Nội. According to Vietnamese myths the first Vietnamese peoples descended from the Dragon Lord Lạc Long Quân
Lac Long Quan
Lạc Long Quân , according to the creation myth of the Vietnamese people, was the father of the Vietnamese people, and their first true king. Lạc Long Quân was the son and sole successor of Kinh Dương Vương , who ruled over Xích Quỷ...
and the Immortal Fairy Âu Cơ
Au Co
Âu Cơ , according to the creation myth of the Vietnamese people, was an immortal mountain fairy who married Lạc Long Quân , and bore an egg sac that hatched a hundred children known collectively as Baiyue, ancestors to the Vietnamese people...
. Lạc Long Quân and Âu Cơ had 100 sons before they decided to part ways. 50 of the children went with their mother to the mountains, and the other 50 went with their father to the sea. The eldest son became the first in a line of earliest Vietnamese kings, collectively known as the Hùng kings (Hùng Vương
Hung Vuong
Hùng Vương is a title used in many modern discussions of the ancient Vietnamese rulers of the Hồng Bàng) period. In antiquity this title began to be used for the ruler who was the religious and political leader of united ancient Vietnam...
or the Hồng Bàng Dynasty). The Hùng kings called the country, which was then located on the Red River delta in present-day northern Vietnam, Văn Lang. The people of Văn Lang were referred to as the Lạc Việt.

Lê Lợi (reigned 1428–1433), a notable land owner in the Lam Kinh region, had a following of more than 1,000 people before rising up against the Chinese Ming regime. Following his victory he mounted the throne and established himself in Thang Long ('Ascending Dragon'), the old capital of Vietnam since the 7th century, now Ha Noi. Thang Long was also called Đông Kinh (東京), meaning 'Eastern Capital'. (東京 is identical in meaning and written form in Chinese characters to that of Tokyo
Tokyo
, ; officially , is one of the 47 prefectures of Japan. Tokyo is the capital of Japan, the center of the Greater Tokyo Area, and the largest metropolitan area of Japan. It is the seat of the Japanese government and the Imperial Palace, and the home of the Japanese Imperial Family...
). 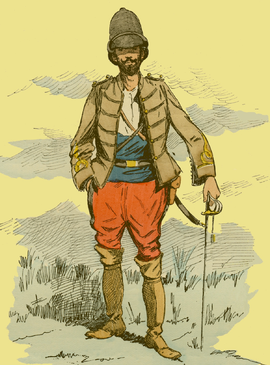 After the Sino-French War
Sino-French War
The Sino–French War was a limited conflict fought between August 1884 and April 1885 to decide whether France should replace China in control of Tonkin . As the French achieved their war aims, they are usually considered to have won the war...
(1884–1885), Tonkin came under French sovereignty, all of Vietnam was now governed by the French. During the French colonial administration, Vietnam was administratively divided into three different territories. The territories were: Tonkin protectorate (in the North), Annam protectorate (in the center), and the colony of Cochinchina
Cochinchina
Cochinchina is a region encompassing the southern third of Vietnam whose principal city is Saigon. It was a French colony from 1862 to 1954. The later state of South Vietnam was created in 1954 by combining Cochinchina with southern Annam. In Vietnamese, the region is called Nam Bộ...
(in the south). These territories were fairly arbitrary in their geographic extent, the vast majority of the Vietnamese regarded their country as a single land and fought for much of the next 70 years to achieve an independent state. Effective French colonial administration lasted until World War II, when French Indochina was occupied by Japan. At the end of the war, the Allies had the surrender in the North taken by China and in the South by the British. This was decided by Harry Truman at the Potsdam Conference
Potsdam Conference
The Potsdam Conference was held at Cecilienhof, the home of Crown Prince Wilhelm Hohenzollern, in Potsdam, occupied Germany, from 16 July to 2 August 1945. Participants were the Soviet Union, the United Kingdom, and the United States...
, stating an intention to hand the region back to French rule. However, immediately after the Japanese were defeated in World War II, Ho Chi Minh
Ho Chi Minh
Hồ Chí Minh , born Nguyễn Sinh Cung and also known as Nguyễn Ái Quốc, was a Vietnamese Marxist-Leninist revolutionary leader who was prime minister and president of the Democratic Republic of Vietnam...
proclaimed the establishment of the Democratic Republic of Vietnam in Ba Đình Square. After the Viet Minh
Viet Minh
Việt Minh was a national independence coalition formed at Pac Bo on May 19, 1941. The Việt Minh initially formed to seek independence for Vietnam from the French Empire. When the Japanese occupation began, the Việt Minh opposed Japan with support from the United States and the Republic of China...
army had defeated the French at the battle of Dien Bien Phu
Battle of Dien Bien Phu
The Battle of Dien Bien Phu was the climactic confrontation of the First Indochina War between the French Union's French Far East Expeditionary Corps and Viet Minh communist revolutionaries. The battle occurred between March and May 1954 and culminated in a comprehensive French defeat that...
(in Western Tonkin) in 1954, the republic transformed into what became known as North Vietnam
North Vietnam
The Democratic Republic of Vietnam , was a communist state that ruled the northern half of Vietnam from 1954 until 1976 following the Geneva Conference and laid claim to all of Vietnam from 1945 to 1954 during the First Indochina War, during which they controlled pockets of territory throughout...
, consisting of Tonkin and North-central Vietnam.
The source of this article is wikipedia, the free encyclopedia.  The text of this article is licensed under the GFDL.