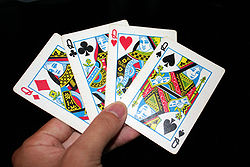 In the standard English playing card deck, the Queen and the other face cards represent no one in particular, although legend states the Queen of Hearts is a representation of Elizabeth of York
Elizabeth of York
Elizabeth of York was Queen consort of England as spouse of King Henry VII from 1486 until 1503, and mother of King Henry VIII of England....
, queen consort
Queen consort
A queen consort is the wife of a reigning king. A queen consort usually shares her husband's rank and holds the feminine equivalent of the king's monarchical titles. Historically, queens consort do not share the king regnant's political and military powers. Most queens in history were queens consort...
of Henry VII of England
Henry VII of England
Henry VII was King of England and Lord of Ireland from his seizing the crown on 22 August 1485 until his death on 21 April 1509, as the first monarch of the House of Tudor....
. Certainly the headdress the queen wears under her crown is of the Early Tudor
Tudor dynasty
The Tudor dynasty or House of Tudor was a European royal house of Welsh origin that ruled the Kingdom of England and its realms, including the Lordship of Ireland, later the Kingdom of Ireland, from 1485 until 1603. Its first monarch was Henry Tudor, a descendant through his mother of a legitimised...
era.