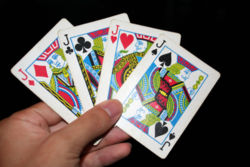 A Jack, also Knave, is a playing card
Playing card
A playing card is a piece of specially prepared heavy paper, thin cardboard, plastic-coated paper, cotton-paper blend, or thin plastic, marked with distinguishing motifs and used as one of a set for playing card games...
with a picture of a man on it. The usual rank of a jack, within its suit
Suit (cards)
In playing cards, a suit is one of several categories into which the cards of a deck are divided. Most often, each card bears one of several symbols showing to which suit it belongs; the suit may alternatively or in addition be indicated by the color printed on the card...
, is as if it were an 11 (that is, between the queen
Queen (playing card)
The Queen is a playing card with a picture of a queen on it. The usual rank of a queen is as if it were 12 ....
and the 10).

As the lowest face (or "court") card, the jack often represents a minimum standard — for example, many poker games require a minimum hand of a pair of jacks ("jacks or better") in order to start the betting.

As early as the mid-16th century the card was known in English decks as the Knave (meaning a male servant of royalty). It became Jack in 1864, when Samuel Hart, an English cardmaker, published a deck using J instead of Kn for the lowest court card. The Knave had been called a Jack as part of the terminology of All-Fours
All-Fours
All Fours, also known as High-Low-Jack or Seven Up, is an English tavern trick-taking card game that was popular as a gambling game until the end of the 19th century...
since the 17th century, but this was not common usage because the word was considered vulgar. However, because the card abbreviation for knave was so close to that of the king, it was very easy to confuse them, especially after suits and rankings were moved to the corners of the card in order to enable people to fan them in one hand and still see all the values. The earliest known deck to place suits and rankings in the corner of the card is from 1693, but these cards did not become common until after 1864 when Hart reintroduced them along with the knave-to-jack change. However, books of card games published in the third quarter of the 19th century evidently still referred to the "knave", and the term with this definition is still recognized in the United Kingdom
United Kingdom
The United Kingdom of Great Britain and Northern IrelandIn the United Kingdom and Dependencies, other languages have been officially recognised as legitimate autochthonous languages under the European Charter for Regional or Minority Languages...
. (Note the exclamation by Estella in Charles Dickens
Charles Dickens
Charles John Huffam Dickens was an English novelist, generally considered the greatest of the Victorian period. Dickens enjoyed a wider popularity and fame than had any previous author during his lifetime, and he remains popular, having been responsible for some of English literature's most iconic...
's novel Great Expectations
Great Expectations
Great Expectations is a novel by Charles Dickens. It was first published in serial form in the publication All the Year Round from 1 December 1860 to August 1861. It has been adapted for stage and screen over 250 times....
: "He calls the knaves, Jacks, this boy!")

In decks with English faces, the jack and the other face cards represent no one in particular — this is in contrast to the historical French practice, in which each court card is said to represent a particular historical or mythological personage. The jacks in a French-styled deck have traditionally assigned names as follows:

The term has come to mean "every single person", as in the following examples:

They're scoundrels... to the last man Jack!

You're to rescue them... every man Jack of them!

The term originates from a cricket pun. In the cricket batting order
Batting order (cricket)
In cricket, the batting order is the sequence in which batsmen play through their team's innings, there always being two batsmen taking part at any one time...
, the worst batsman is listed at number 11. The "last man" (to bat) can therefore be referred to using playing cards terminology; following numbers 8, 9 and 10 comes Jack.

The figure of the Jack has been quoted in many literary works throughout the centuries. Among these is one by the English writer Samuel Rowlands
Samuel Rowlands
Samuel Rowlands , English author of pamphlets in prose and verse, which reflect the follies and humours of the lower middle-class life of his time, seems to have had no contemporary literary reputation; but his work throws considerable light on the development of popular literature and social life...
, a prolific writer of the end of the sixteenth and early part of the succeeding century. The Four Knaves is a series of Satirical Tracts, with Introduction and Notes by E. F. Rimbault, upon the subject of playing cards. His The Knave of Clubbs: Tis Merry When Knaves Meet was first published in 1600, then again in 1609 and 1611. In accordance with a promise at the end of this book, Rowlands went on with his series of Knaves, and in 1612 gave to the world The Knave of Harts: Haile Fellowe, Well Meet, where his Supplication To Card-Makers appears. It was probably written to the English manufacturers who copied the Court figures created by the French to the English decks.

These card designs are based on those from a historical French deck, and include the historical and mythological names associated with the French cards. The Anglo-American designs can be seen in the photo at the top of the page.

The lowest court figure of the Jack has been, from the earliest known European card games like Karnöffel
Karnöffel
Karnöffel is a card game which probably came from the upper-German language area in Europe in the first quarter of the 15th century. It first appeared "listed in a municipal ordinance of Nördlingen, Bavaria, in 1426 among the games that could be lawfully played at the annual city fête...
to the more recent ones like Euchre
Euchre
Euchre or eucre, is a trick-taking card game most commonly played with four people in two partnerships with a deck of 24 standard playing cards. It is the game responsible for introducing the joker into modern packs; this was invented around 1860 to act as a top trump or best bower...
, mysteriously promoted to a higher or the highest position in the traditional rank of cards where the Ace or King usually occupy the first place. Games with such reversal include