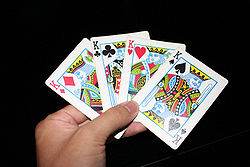 The king is a playing card
Playing card
A playing card is a piece of specially prepared heavy paper, thin cardboard, plastic-coated paper, cotton-paper blend, or thin plastic, marked with distinguishing motifs and used as one of a set for playing card games...
with a picture of a king on it. The usual rank of a king is as if it were a 13; that is, above the queen
Queen (playing card)
The Queen is a playing card with a picture of a queen on it. The usual rank of a queen is as if it were 12 ....
. In some games, the king is the highest-ranked card; in others, the ace
Ace
An ace is a playing card. In the standard French deck, an ace has a single suit symbol located in the middle of the card, sometimes large and decorated, especially in the case of the Ace of Spades...
is higher. In pinochle
Pinochle
Pinochle or Binocle is a trick-taking game typically for two to four players and played with a 48 card deck. Derived from the card game bezique, players score points by trick-taking and also by forming combinations of cards into melds. It is thus considered part of a "trick-and-meld" category...
, schnapsen, and many other European games, both the ace and the 10 rank higher than the king.

In the standard English playing card deck, the king and the other face cards represent no one in particular. The king of hearts is sometimes called the "suicide king" because he appears to be sticking his sword into his head. However, it is debated whether or not the sword and hand holding it actually belong to the king, due to a different design pattern that could indicate someone else stabbed him. The king of hearts is the only one of the kings without a mustache, whereas the king of diamonds is the only king not depicted carrying a sword, wielding an axe instead.

In a French deck, the court cards do have names. Because the manufacture of playing cards was illegal in the UK
United Kingdom
The United Kingdom of Great Britain and Northern IrelandIn the United Kingdom and Dependencies, other languages have been officially recognised as legitimate autochthonous languages under the European Charter for Regional or Minority Languages...
during the Interregnum
Interregnum
An interregnum is a period of discontinuity or "gap" in a government, organization, or social order...
, when the English Restoration
English Restoration
The Restoration of the English monarchy began in 1660 when the English, Scottish and Irish monarchies were all restored under Charles II after the Interregnum that followed the Wars of the Three Kingdoms...
came and the court began playing card games, the suits
Suit (cards)
In playing cards, a suit is one of several categories into which the cards of a deck are divided. Most often, each card bears one of several symbols showing to which suit it belongs; the suit may alternatively or in addition be indicated by the color printed on the card...
in an English deck came from the French deck, but without all of the lore. For a period, starting in the 15th century, French playing-card manufacturers assigned to each of the court cards names taken from history or mythology. This practice had largely disappeared by the 19th century. The most common names for the kings were: