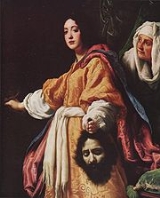 The Book of Judith is a deuterocanonical book, included in the Septuagint and the Catholic and Eastern Orthodox Christian
Christian
A Christian is a person who adheres to Christianity, an Abrahamic, monotheistic religion based on the life and teachings of Jesus of Nazareth as recorded in the Canonical gospels and the letters of the New Testament...
Old Testament
Old Testament
The Old Testament, of which Christians hold different views, is a Christian term for the religious writings of ancient Israel held sacred and inspired by Christians which overlaps with the 24-book canon of the Masoretic Text of Judaism...
of the Bible
Bible
The Bible refers to any one of the collections of the primary religious texts of Judaism and Christianity. There is no common version of the Bible, as the individual books , their contents and their order vary among denominations...
, but excluded by Jews
Judaism
Judaism ) is the "religion, philosophy, and way of life" of the Jewish people...
and Protestants
Protestantism
Protestantism is one of the three major groupings within Christianity. It is a movement that began in Germany in the early 16th century as a reaction against medieval Roman Catholic doctrines and practices, especially in regards to salvation, justification, and ecclesiology.The doctrines of the...
. The book contains numerous historical anachronisms, which is why many scholars now accept it as non-historical; it has been considered a parable
Parable
A parable is a succinct story, in prose or verse, which illustrates one or more instructive principles, or lessons, or a normative principle. It differs from a fable in that fables use animals, plants, inanimate objects, and forces of nature as characters, while parables generally feature human...
or perhaps the first historical novel.

The name Judith is the feminine form of Judah
Judah
The name Judah can refer to:*Judah , fourth son of the Biblical patriarch Jacob All later individuals, groups and places of this name are directly or indirectly derived from this Judah....
.
The Book of Judith has a tragic setting that appealed to Jewish patriots and it warned of the urgency of adhering to Mosaic law, generally speaking, but what accounted for its enduring appeal was the drama of its narrative.