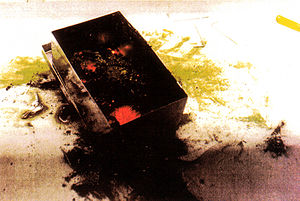 A pyrophoric substance (from Greek πυροφορος, purophoros, "fire-bearing") is a substance that will ignite spontaneously in air. Examples are iron sulfide
Iron(II) sulfide
Iron sulfide or ferrous sulfide is a chemical compound with the formula . In practice, iron sulfides are often non-stoichiometric. Powdered iron sulfide is pyrophoric Iron(II) sulfide or ferrous sulfide (Br.E. sulphide) is a chemical compound with the formula . In practice, iron sulfides are...
and many reactive metals including uranium
Uranium
Uranium is a silvery-white metallic chemical element in the actinide series of the periodic table, with atomic number 92. It is assigned the chemical symbol U. A uranium atom has 92 protons and 92 electrons, of which 6 are valence electrons...
, when powdered or sliced thin. Pyrophoric materials are often water-reactive as well and will ignite when they contact water or humid air. They can be handled safely in atmospheres of argon
Argon
Argon is a chemical element represented by the symbol Ar. Argon has atomic number 18 and is the third element in group 18 of the periodic table . Argon is the third most common gas in the Earth's atmosphere, at 0.93%, making it more common than carbon dioxide...
or (with a few exceptions) nitrogen
Nitrogen
Nitrogen is a chemical element that has the symbol N, atomic number of 7 and atomic mass 14.00674 u. Elemental nitrogen is a colorless, odorless, tasteless, and mostly inert diatomic gas at standard conditions, constituting 78.08% by volume of Earth's atmosphere...
. Most pyrophoric fires should be extinguished with a Class D fire extinguisher for burning metals.

The creation of sparks
Spark (fire)
A spark is an incandescent particle. Such sparks may be produced by pyrotechnics, by metalworking or as a by-product of fires, especially when burning wood.-Pyrotechnics:...
from metals is based on the pyrophoricity of small metal particles, and pyrophoric alloys are made for this purpose. This has certain uses: the sparking mechanisms in lighter
Lighter
A lighter is a portable device used to generate a flame. It consists of a metal or plastic container filled with a flammable fluid or pressurized liquid gas, a means of ignition, and some provision for extinguishing the flame.- History :...
s and various toys, using ferrocerium
Ferrocerium
Ferrocerium is a man-made metallic material that has the ability to give off a large number of hot sparks at temperatures at when scraped against a rough surface , such as ridged steel...
; starting fires without matches, using a firesteel
Firesteel
A Fire striker is a piece of high-carbon steel used for striking a spark, usually kept in a tinderbox together with flint and tinder.-Usage:...
; the flintlock
Flintlock
Flintlock is the general term for any firearm based on the flintlock mechanism. The term may also apply to the mechanism itself. Introduced at the beginning of the 17th century, the flintlock rapidly replaced earlier firearm-ignition technologies, such as the doglock, matchlock and wheellock...
mechanism in firearms; and spark-testing ferrous metals.

Small amounts of pyrophoric liquids are often supplied in a glass bottle with a PTFE-lined septum
Septum
In anatomy, a septum is a wall, dividing a cavity or structure into smaller ones.-In human anatomy:...
. Larger amounts are supplied in metal tanks similar to gas cylinders, designed so a needle can fit through the valve opening. A syringe, carefully dried and flushed of air with an inert gas, is used to extract the liquid from its container.

Pyrophoric solids require the use of a sealed glove box
Glovebox
A glovebox is a sealed container that is designed to allow one to manipulate objects where a separate atmosphere is desired. Built into the sides of the glovebox are gloves arranged in such a way that the user can place their hands into the gloves and perform tasks inside the box without breaking...
flushed with inert gas. Glove boxes are expensive and require maintenance. Thus, many pyrophoric solids are sold as solutions, or dispersions in mineral oil or lighter hydrocarbon solvents. Mildly pyrophoric solids (such as lithium aluminium hydride
Lithium aluminium hydride
Lithium aluminium hydride, commonly abbreviated to LAH or known as LithAl, is an inorganic compound with the chemical formula LiAlH4. It was discovered by Finholt, Bond and Schlesinger in 1947. This compound is used as a reducing agent in organic synthesis, especially for the reduction of esters,...
and sodium hydride
Sodium hydride
Sodium hydride is the chemical compound with the empirical formula NaH. It is primarily used as a strong base in organic synthesis. NaH is representative of the saline hydrides, meaning it is a salt-like hydride, composed of Na+ and H− ions, in contrast to the more molecular hydrides such as...
) can be handled in the air for brief periods of time, but the containers must be flushed with inert gas before storage.

Small amounts of pyrophoric materials and empty containers must be disposed of carefully, by quenching the residue. Less-reactive substances can be disposed of by diluting heavily with an unreactive solvent
Solvent
A solvent is a liquid, solid, or gas that dissolves another solid, liquid, or gaseous solute, resulting in a solution that is soluble in a certain volume of solvent at a specified temperature...
like hexane
Hexane
Hexane is a hydrocarbon with the chemical formula C6H14; that is, an alkane with six carbon atoms.The term may refer to any of four other structural isomers with that formula, or to a mixture of them. In the IUPAC nomenclature, however, hexane is the unbranched isomer ; the other four structures...
, placing the container in a cooling bath
Cooling bath
A cooling bath is a mixture used in a laboratory when low temperatures are needed, for example to conduct low-temperature chemical reactions , to collect highly volatile liquids from distillation, or in cold traps...
, and adding water dropwise. More reactive substances can be quenched by slowly adding the dilute solution to dry ice
Dry ice
Dry ice, sometimes referred to as "Cardice" or as "card ice" , is the solid form of carbon dioxide. It is used primarily as a cooling agent. Its advantages include lower temperature than that of water ice and not leaving any residue...
, then adding a mildly reactive substance that does not freeze in dry ice to the mixture (wet diethyl ether
Diethyl ether
Diethyl ether, also known as ethyl ether, simply ether, or ethoxyethane, is an organic compound in the ether class with the formula . It is a colorless, highly volatile flammable liquid with a characteristic odor...
, acetone
Acetone
Acetone is the organic compound with the formula 2CO, a colorless, mobile, flammable liquid, the simplest example of the ketones.Acetone is miscible with water and serves as an important solvent in its own right, typically as the solvent of choice for cleaning purposes in the laboratory...
, isopropyl alcohol
Isopropyl alcohol
Isopropyl alcohol is a common name for a chemical compound with the molecular formula C3H8O. It is a colorless, flammable chemical compound with a strong odor...
, and methanol
Methanol
Methanol, also known as methyl alcohol, wood alcohol, wood naphtha or wood spirits, is a chemical with the formula CH3OH . It is the simplest alcohol, and is a light, volatile, colorless, flammable liquid with a distinctive odor very similar to, but slightly sweeter than, ethanol...
are often used).