Encyclopedia
A pulse is an annual leguminous crop
Crop
Crop may refer to:* Crop, a plant grown and harvested for agricultural use* Crop , part of the alimentary tract of some animals* Crop , a modified whip used in horseback riding or disciplining humans...
yielding from one to twelve seeds of variable size, shape, and color within a pod. Pulses are used for food and animal feed. The term "pulse", as used by the Food and Agricultural Organization (FAO), is reserved for crops harvested solely for the dry seed. This excludes green beans and green peas, which are considered vegetable crops. Also excluded are crops that are mainly grown for oil extraction (oilseeds like soybeans and peanut
Peanut
The peanut, or groundnut , is a species in the legume or "bean" family , so it is not a nut. The peanut was probably first cultivated in the valleys of Peru. It is an annual herbaceous plant growing tall...
s), and crops which are used exclusively for sowing (clovers, alfalfa). However, in common use these distinctions are not clearly made, and many of the varieties so classified and given below are also used as vegetables, with their beans in pods while young cooked in whole cuisines and sold for the purpose; for example black eyed beans, lima beans and Toor or pigeon peas are thus eaten as fresh green beans cooked as part of a meal. Pulses are important food crops due to their high protein
Protein
Proteins are biochemical compounds consisting of one or more polypeptides typically folded into a globular or fibrous form, facilitating a biological function. A polypeptide is a single linear polymer chain of amino acids bonded together by peptide bonds between the carboxyl and amino groups of...
and essential amino acid
Essential amino acid
An essential amino acid or indispensable amino acid is an amino acid that cannot be synthesized de novo by the organism , and therefore must be supplied in the diet.-Essentiality vs. conditional essentiality in humans:...
content. Like many leguminous crops, pulses play a key role in crop rotation
Crop rotation
Crop rotation is the practice of growing a series of dissimilar types of crops in the same area in sequential seasons.Crop rotation confers various benefits to the soil. A traditional element of crop rotation is the replenishment of nitrogen through the use of green manure in sequence with cereals...
due to their ability to fix nitrogen
Nitrogen fixation
Nitrogen fixation is the natural process, either biological or abiotic, by which nitrogen in the atmosphere is converted into ammonia . This process is essential for life because fixed nitrogen is required to biosynthesize the basic building blocks of life, e.g., nucleotides for DNA and RNA and...
.

Just like words such as "bean" and "lentil", the word "pulse" may also refer to just the seed, rather than the entire plant.

India
India
India , officially the Republic of India , is a country in South Asia. It is the seventh-largest country by geographical area, the second-most populous country with over 1.2 billion people, and the most populous democracy in the world...
is the world's largest producer and the largest consumer of pulses. Pakistan
Pakistan
Pakistan , officially the Islamic Republic of Pakistan is a sovereign state in South Asia. It has a coastline along the Arabian Sea and the Gulf of Oman in the south and is bordered by Afghanistan and Iran in the west, India in the east and China in the far northeast. In the north, Tajikistan...
, Canada
Canada
Canada is a North American country consisting of ten provinces and three territories. Located in the northern part of the continent, it extends from the Atlantic Ocean in the east to the Pacific Ocean in the west, and northward into the Arctic Ocean...
, Burma, Australia
Australia
Australia , officially the Commonwealth of Australia, is a country in the Southern Hemisphere comprising the mainland of the Australian continent, the island of Tasmania, and numerous smaller islands in the Indian and Pacific Oceans. It is the world's sixth-largest country by total area...
and the United States
United States
The United States of America is a federal constitutional republic comprising fifty states and a federal district...
, in that order, are significant exporters and are India's most significant suppliers. 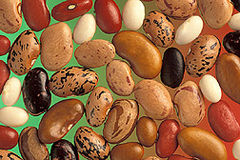 Pulses are 20 to 25% protein by weight, which is double the protein content of wheat
Wheat
Wheat is a cereal grain, originally from the Levant region of the Near East, but now cultivated worldwide. In 2007 world production of wheat was 607 million tons, making it the third most-produced cereal after maize and rice...
and three times that of rice
Rice
Rice is the seed of the monocot plants Oryza sativa or Oryza glaberrima . As a cereal grain, it is the most important staple food for a large part of the world's human population, especially in East Asia, Southeast Asia, South Asia, the Middle East, and the West Indies...
. While pulses are generally high in protein, and the digestibility of that protein is also high, they often are relatively poor in the essential amino acid
Essential amino acid
An essential amino acid or indispensable amino acid is an amino acid that cannot be synthesized de novo by the organism , and therefore must be supplied in the diet.-Essentiality vs. conditional essentiality in humans:...
methionine
Methionine
Methionine is an α-amino acid with the chemical formula HO2CCHCH2CH2SCH3. This essential amino acid is classified as nonpolar. This amino-acid is coded by the codon AUG, also known as the initiation codon, since it indicates mRNA's coding region where translation into protein...
, although Indian cuisine includes sesame seeds, which contain high levels of methionine. Grains
Cereal
Cereals are grasses cultivated for the edible components of their grain , composed of the endosperm, germ, and bran...
(which are themselves deficient in lysine
Lysine
Lysine is an α-amino acid with the chemical formula HO2CCH4NH2. It is an essential amino acid, which means that the human body cannot synthesize it. Its codons are AAA and AAG....
) are commonly consumed along with pulses to form a complete diet of protein.

Pulses have significant nutritional and health advantages for consumers. They are the most important dietary predictor of survival in older people of different ethnicities, and in the Seven Countries Study, legume consumption was highly correlated with a reduced mortality from coronary heart disease
Coronary heart disease
Coronary artery disease is the end result of the accumulation of atheromatous plaques within the walls of the coronary arteries that supply the myocardium with oxygen and nutrients. It is sometimes also called coronary heart disease...
. Furthermore, pulses are especially high in amylose
Amylose
Amylose is a linear polymer made up of D-glucose units.This polysaccharide is one of the two components of starch, making up approximately 2-30% of the structure...
starch making them a good source of prebiotic
Prebiotic (nutrition)
Prebiotics are non-digestible food ingredients that stimulate the growth and/or activity of bacteria in the digestive system in ways claimed to be beneficial to health. They were first identified and named by Marcel Roberfroid in 1995. As a functional food component, prebiotics, like probiotics,...
resistant starch
Resistant starch
Resistant starch is starch and starch degradation products that escape digestion in the small intestine of healthy individuals. Resistant starch is considered the third type of dietary fiber, as it can deliver some of the benefits of insoluble fiber and some of the benefits of soluble fiber.Some...
.