Overview
The Cowpea (International Feed Number, 5-01-661) is one of several species
Species
In biology, a species is one of the basic units of biological classification and a taxonomic rank. A species is often defined as a group of organisms capable of interbreeding and producing fertile offspring. While in many cases this definition is adequate, more precise or differing measures are...
of the widely cultivated genus Vigna
Vigna
The genus Vigna is in the plant family Fabaceae. The genus is named after Domenico Vigna, an Italian botanist of the 17th century. They include some well-known and other less well-known beans formerly — and sometimes still, especially in non-scholarly sources — included in the genus Phaseolus...
. Four cultivated subspecies are recognised:
Cowpeas are one of the most important food legume crops in the semi-arid tropics covering Asia, Africa, southern Europe and Central and South America.

What is the complete scientific classification of cowpea?

What is the taxonomic classification of cowpea?
More

All about cowpea
More

Encyclopedia
The Cowpea (International Feed Number, 5-01-661) is one of several species
Species
In biology, a species is one of the basic units of biological classification and a taxonomic rank. A species is often defined as a group of organisms capable of interbreeding and producing fertile offspring. While in many cases this definition is adequate, more precise or differing measures are...
of the widely cultivated genus Vigna
Vigna
The genus Vigna is in the plant family Fabaceae. The genus is named after Domenico Vigna, an Italian botanist of the 17th century. They include some well-known and other less well-known beans formerly — and sometimes still, especially in non-scholarly sources — included in the genus Phaseolus...
. Four cultivated subspecies are recognised:
Cowpeas are one of the most important food legume crops in the semi-arid tropics covering Asia, Africa, southern Europe and Central and South America. A drought-tolerant and warm-weather crop, cowpeas are well-adapted to the drier regions of the tropics, where other food legumes do not perform well. It also has the useful ability to fix atmospheric nitrogen
Nitrogen fixation
Nitrogen fixation is the natural process, either biological or abiotic, by which nitrogen in the atmosphere is converted into ammonia . This process is essential for life because fixed nitrogen is required to biosynthesize the basic building blocks of life, e.g., nucleotides for DNA and RNA and...
through its root nodule
Root nodule
Root nodules occur on the roots of plants that associate with symbiotic nitrogen-fixing bacteria. Under nitrogen-limiting conditions, capable plants form a symbiotic relationship with a host-specific strain of bacteria known as rhizobia...
s, and it grows well in poor soils with more than 85% sand and with less than 0.2% organic matter and low levels of phosphorus. In addition, it is shade tolerant, and therefore, compatible as an intercrop with maize
Maize
Maize known in many English-speaking countries as corn or mielie/mealie, is a grain domesticated by indigenous peoples in Mesoamerica in prehistoric times. The leafy stalk produces ears which contain seeds called kernels. Though technically a grain, maize kernels are used in cooking as a vegetable...
, millet
Millet
The millets are a group of small-seeded species of cereal crops or grains, widely grown around the world for food and fodder. They do not form a taxonomic group, but rather a functional or agronomic one. Their essential similarities are that they are small-seeded grasses grown in difficult...
, sorghum
Sorghum
Sorghum is a genus of numerous species of grasses, one of which is raised for grain and many of which are used as fodder plants either cultivated or as part of pasture. The plants are cultivated in warmer climates worldwide. Species are native to tropical and subtropical regions of all continents...
, sugarcane
Sugarcane
Sugarcane refers to any of six to 37 species of tall perennial grasses of the genus Saccharum . Native to the warm temperate to tropical regions of South Asia, they have stout, jointed, fibrous stalks that are rich in sugar, and measure two to six metres tall...
, and cotton
Cotton
Cotton is a soft, fluffy staple fiber that grows in a boll, or protective capsule, around the seeds of cotton plants of the genus Gossypium. The fiber is almost pure cellulose. The botanical purpose of cotton fiber is to aid in seed dispersal....
. This makes cowpea an important component of traditional intercropping systems, especially in the complex and elegant subsistence farming systems of the dry savanna
Savanna
A savanna, or savannah, is a grassland ecosystem characterized by the trees being sufficiently small or widely spaced so that the canopy does not close. The open canopy allows sufficient light to reach the ground to support an unbroken herbaceous layer consisting primarily of C4 grasses.Some...
s in sub-Saharan Africa.
Research in Ghana found that selecting early generations of cowpea crops to increase yield is not an effective strategy. Francis Padi from the Savannah Agricultural Research Institute in Tamale, Ghana, writing in Crop Science, suggests other methods such as bulk breeding are more efficient in developing high-yield varieties. 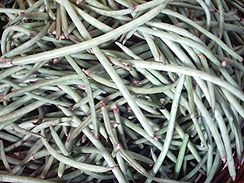 Cowpeas are a common food item in the southern United States
United States
The United States of America is a federal constitutional republic comprising fifty states and a federal district...
, where they are often called Black-eyed pea
Black-eyed pea
The black-eyed pea, also called black-eyed bean and chawalie or lobia in various languages in India and Pakistan, is a subspecies of the cowpea, grown around the world for its medium-sized, edible bean. The bean mutates easily, giving rise to a number of varieties. The common commercial one is...
or field peas. Two subcategories of field peas are crowder peas, so called because they are crowded together in their pods, causing them to have squarish ends, and cream peas.

In India, in Bengali
Bengali language
Bengali or Bangla is an eastern Indo-Aryan language. It is native to the region of eastern South Asia known as Bengal, which comprises present day Bangladesh, the Indian state of West Bengal, and parts of the Indian states of Tripura and Assam. It is written with the Bengali script...
, it is called Barboti Kolai, in Kannada
Kannada language
Kannada or , is a language spoken in India predominantly in the state of Karnataka. Kannada, whose native speakers are called Kannadigas and number roughly 50 million, is one of the 30 most spoken languages in the world...
, it is called Alasande. In Hindi
Hindi
Standard Hindi, or more precisely Modern Standard Hindi, also known as Manak Hindi , High Hindi, Nagari Hindi, and Literary Hindi, is a standardized and sanskritized register of the Hindustani language derived from the Khariboli dialect of Delhi...
, it is called lobhia. In Gujarati
Gujarati language
Gujarati is an Indo-Aryan language, and part of the greater Indo-European language family. It is derived from a language called Old Gujarati which is the ancestor language of the modern Gujarati and Rajasthani languages...
, these are called Chola or Chowla (ચોળા). In Marathi
Marathi language
Marathi is an Indo-Aryan language spoken by the Marathi people of western and central India. It is the official language of the state of Maharashtra. There are over 68 million fluent speakers worldwide. Marathi has the fourth largest number of native speakers in India and is the fifteenth most...
, these are called Chawali or Chavali (चवळी). Kārāmani or Kārāmani Payir or Thatta Payir Tamil
Tamil people
Tamil people , also called Tamils or Tamilians, are an ethnic group native to Tamil Nadu, India and the north-eastern region of Sri Lanka. Historic and post 15th century emigrant communities are also found across the world, notably Malaysia, Singapore, Mauritius, South Africa, Australia, Canada,...
) the beans are called thatta kaai and are an integral part of the cuisine in southern region of India. In Tamilnadu during the Tamil month of Maasi
Maasi
Maasi is a village in Orissaare Parish, Saare County, on the eastern part of Saaremaa Island, Estonia....
(February) - Panguni (March) a cake-like dish called Kozhukattai or Adai (steamed sweet dumplings) prepared with cooked and mashed cowpeas mixed with jaggery
Jaggery
Jaggery is a traditional unrefined non-centrifugal whole cane sugar consumed in Asia, Africa, Latin America, and the Caribbean. It is a concentrated product of cane juice without separation of the molasses and crystals, and can vary from golden brown to dark brown in color...
, ghee
Ghee
Ghee is a class of clarified butter that originated in South Asia and is commonly used in South Asian cuisine....
and other ingredients. Thatta payir in sambar and pulikkuzhambu (spicy semisolid gravy in tamarind
Tamarind
Tamarind is a tree in the family Fabaceae. The genus Tamarindus is monotypic .-Origin:...
paste) is a popular dish in Thamizh Nadu.

According to the USDA food database, the leaves of the cowpea plant have the highest percentage of calories from protein among vegetarian
Vegetarianism
Vegetarianism encompasses the practice of following plant-based diets , with or without the inclusion of dairy products or eggs, and with the exclusion of meat...
foods.

In Sri Lanka, Cowpea is cooked in many different ways. One way is to cook cowpea with coconut milk.