Encyclopedia
Puerto Octay is a town and commune located on the north shore of Llanquihue Lake in Los Lagos Region
Los Lagos Region
Los Lagos Region is one of Chile's 15 regions, which are first order administrative divisions, and comprises four provinces: Chiloé, Llanquihue, Osorno and Palena. The region contains the country's second largest island, Chiloé, and the second largest lake, Llanquihue.Its capital is Puerto Montt;...
in the south of Chile
Chile
Chile ,officially the Republic of Chile , is a country in South America occupying a long, narrow coastal strip between the Andes mountains to the east and the Pacific Ocean to the west. It borders Peru to the north, Bolivia to the northeast, Argentina to the east, and the Drake Passage in the far...
. It was settled by German colonists in 1852. Puerto Octay was an important port with regular traffic to Puerto Varas
Puerto Varas
Puerto Varas is a city and commune located in the southern Chilean province of Llanquihue, in the Los Lagos Region.The city is well known for its German traditions, its food, its fish and seafood, the natural environment, its casino and 5 star hotels. Only from Puerto Montt, located on the shore...
before the coming of railway in 1912.

Its origin dates back to the German colonization in 1852 driven by Bernhard Philippi
Bernhard Eunom Philippi
Berhard Eunom Philippi was a German naturalist, explorer and colonization agent for Chile.-Biography:His father was John Wilhelm Eberhard Philippi and his mother Mary Anne Krumwiede. In 1818 the family moved to Switzerland, where Rodolph and his brother Bernard entered the school of Johann...
. With the passage of time becomes one of the major ports of Lake Llanquihue. On December 22 of 1891 is established as a municipality
Municipality
A municipality is essentially an urban administrative division having corporate status and usually powers of self-government. It can also be used to mean the governing body of a municipality. A municipality is a general-purpose administrative subdivision, as opposed to a special-purpose district...
, under the Presidency of the Republic Jorge Montt
Jorge Montt
Jorge Montt Álvarez was vice-admiral of the Chilean Navy and president of Chile from 1891 to 1896.-Early life:...
.

Puerto Octay currently has a rich and varied architecture, mostly built of wood, which is the historical reflection of the colonization process, driven by the State of Chile in the mid-nineteenth century, with families coming from Germany.

So constructions emerge as the House Niklitschek, Hotel Haase, Wulf House, current Colegio San Vicente de Paul and House Werner to name a few. What is extraordinary about this city is that despite the lapse of more than 100 years, it is still possible to assess this type of buildings.

As a way to cherish and protect this architectural heritage, now taking place in Puerto Octay a process of declaration of Typical Zone, where they will identify a representative area of identity and history, which will be legally protected by the State of Chile. 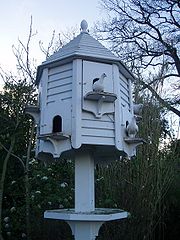 Bird
Bird
Birds are feathered, winged, bipedal, endothermic , egg-laying, vertebrate animals. Around 10,000 living species and 188 families makes them the most speciose class of tetrapod vertebrates. They inhabit ecosystems across the globe, from the Arctic to the Antarctic. Extant birds range in size from...
s: Thrush
Thrush (bird)
The thrushes, family Turdidae, are a group of passerine birds that occur worldwide.-Characteristics:Thrushes are plump, soft-plumaged, small to medium-sized birds, inhabiting wooded areas, and often feed on the ground or eat small fruit. The smallest thrush may be the Forest Rock-thrush, at and...
, Dove
Dove
Pigeons and doves constitute the bird family Columbidae within the order Columbiformes, which include some 300 species of near passerines. In general terms "dove" and "pigeon" are used somewhat interchangeably...
, Parrot
Parrot
Parrots, also known as psittacines , are birds of the roughly 372 species in 86 genera that make up the order Psittaciformes, found in most tropical and subtropical regions. The order is subdivided into three families: the Psittacidae , the Cacatuidae and the Strigopidae...
, rooster from the mountain (extinct), Kestrel
Kestrel
The name kestrel, is given to several different members of the falcon genus, Falco. Kestrels are most easily distinguished by their typical hunting behaviour which is to hover at a height of around over open country and swoop down on prey, usually small mammals, lizards or large insects...
, Bauda, Heron
Heron
The herons are long-legged freshwater and coastal birds in the family Ardeidae. There are 64 recognised species in this family. Some are called "egrets" or "bitterns" instead of "heron"....
, Sparrow
Sparrow
The sparrows are a family of small passerine birds, Passeridae. They are also known as true sparrows, or Old World sparrows, names also used for a genus of the family, Passer...
s, Swallow
Swallow
The swallows and martins are a group of passerine birds in the family Hirundinidae which are characterised by their adaptation to aerial feeding...
s.

Mammal
Mammal
Mammals are members of a class of air-breathing vertebrate animals characterised by the possession of endothermy, hair, three middle ear bones, and mammary glands functional in mothers with young...
s: Cougar, Nutria, among others.

Fish: Salmon
Salmon
Salmon is the common name for several species of fish in the family Salmonidae. Several other fish in the same family are called trout; the difference is often said to be that salmon migrate and trout are resident, but this distinction does not strictly hold true...
native (extinct), Mackerel
Mackerel
Mackerel is a common name applied to a number of different species of fish, mostly, but not exclusively, from the family Scombridae. They may be found in all tropical and temperate seas. Most live offshore in the oceanic environment but a few, like the Spanish mackerel , enter bays and can be...
, Trout
Trout
Trout is the name for a number of species of freshwater and saltwater fish belonging to the Salmoninae subfamily of the family Salmonidae. Salmon belong to the same family as trout. Most salmon species spend almost all their lives in salt water...
.

Referring to tourism in the district lake, Lake Llanquihue
Lake Llanquihue
Lake Llanquihue is the second largest lake in Chile with an area of about . It is situated in the southern Los Lagos Region in the Llanquihue and Osorno provinces. The lake's fan-like form was created by successive piedmont glaciers during the Quaternary glaciations...
has beautiful beach
Beach
A beach is a geological landform along the shoreline of an ocean, sea, lake or river. It usually consists of loose particles which are often composed of rock, such as sand, gravel, shingle, pebbles or cobblestones...
es for vacation or go fishing and water sports beaches highlighting Falls, Rupanco Islet, La Baja, Puerto Maitén and Fonck.

According to the 2002 census
Census
A census is the procedure of systematically acquiring and recording information about the members of a given population. It is a regularly occurring and official count of a particular population. The term is used mostly in connection with national population and housing censuses; other common...
of the National Statistics Institute
National Statistics Institute (Chile)
The National Statistics Institute of Chile is a state-run organization of the Government of Chile, created in the second half of the 19th century and tasked with performing a general census of population and housing, then collecting, producing and publishing official demographic statistics of...
, Puerto Octay spans an area of 1795.7 sqkm and has 10,236 inhabitants (5,391 men and 4,845 women). Of these, 3,403 (33.2%) lived in urban area
Urban area
An urban area is characterized by higher population density and vast human features in comparison to areas surrounding it. Urban areas may be cities, towns or conurbations, but the term is not commonly extended to rural settlements such as villages and hamlets.Urban areas are created and further...
s and 6,833 (66.8%) in rural areas. The population fell by 7.4% (815 persons) between the 1992 and 2002 censuses.

As a commune, Puerto Octay is a third-level administrative division of Chile administered by a municipal council
Municipal council
A municipal council is the local government of a municipality. Specifically the term can refer to the institutions of various countries that can be translated by this term...
, headed by an alcalde
Alcalde
Alcalde , or Alcalde ordinario, is the traditional Spanish municipal magistrate, who had both judicial and administrative functions. An alcalde was, in the absence of a corregidor, the presiding officer of the Castilian cabildo and judge of first instance of a town...
who is directly elected every four years.

Within the electoral divisions of Chile, Puerto Octay is represented in the Chamber of Deputies
Chamber of Deputies of Chile
The Chamber of Deputies of the Republic of Chile is the lower house of Chile's bicameral Congress. Its organisation and its powers and duties are defined in articles 42 to 59 of Chile's current constitution....
by Mr. Fidel Espinoza (PS
Socialist Party of Chile
The Socialist Party of Chile is a political party, that is part of the center-left Coalition of Parties for Democracy coalition. Its historical leader was the late President of Chile Salvador Allende Gossens, who was deposed by General Pinochet in 1973...
) and Mr. Carlos Recondo (UDI) as part of the 56th electoral district, (together with Puyehue
Puyehue, Chile
Puyehue is a commune in Chile located in Osorno Province of Los Lagos Region. It is bordered to the south by Rupanco Lake, to the east by the Andes and Argentina, to the north by Puyehue Lake and to the west by Osorno commune. Cardenal Antonio Samoré Pass that links the Los Lagos Region to...
, Río Negro
Río Negro, Chile
Río Negro is a Chilean city and commune in Osorno Province, Los Lagos Region, 38 km to the south of Osorno and 6 km of 5 Route the South...
, Purranque
Purranque
Purranque is a city in the Chilean Los Lagos Region, which lies on the Pan-American Highway about north of Puerto Montt. It is part of the Osorno Province.-History:...
, Fresia, Frutillar
Frutillar
Frutillar is a city and commune located in southern Chile in the Los Lagos Region. The bay of Frutillar is placed on the banks of Lake Llanquihue, the largest lake entirely within Chile.-History:...
, Llanquihue
Llanquihue, Chile
Llanquihue is a Chilean commune and city in Llanquihue Province, Los Lagos Region. The city lies on the western shore of Lake Llanquihue, where the Maullín River starts. It is located north of Puerto Varas and south of Frutillar and is connected to both cities by Chile Highway 5.- History :On 19...
, Puerto Varas
Puerto Varas
Puerto Varas is a city and commune located in the southern Chilean province of Llanquihue, in the Los Lagos Region.The city is well known for its German traditions, its food, its fish and seafood, the natural environment, its casino and 5 star hotels. Only from Puerto Montt, located on the shore...
and Los Muermos
Los Muermos
Los Muermos is a city and commune in Llanquihue Province, Los Lagos Region in southern Chile.-Demographics:According to the 2002 census of the National Statistics Institute, Los Muermos spans an area of and has 16,964 inhabitants . Of these, 5,707 lived in urban areas and 11,257 in rural areas...
). The commune is represented in the Senate
Senate of Chile
The Senate of the Republic of Chile is the upper house of Chile's bicameral National Congress, as established in the current Constitution of Chile.-Composition:...
by Camilo Escalona Medina (PS) and Carlos Kuschel Silva (RN
National Renewal (Chile)
National Renewal , is a liberal conservative political party belonging to the Chilean right-wing political coalition Coalition for Change in conjunction with the Independent Democratic Union and the Chile First movement...
) as part of the 17th senatorial constituency (Los Lagos Region).